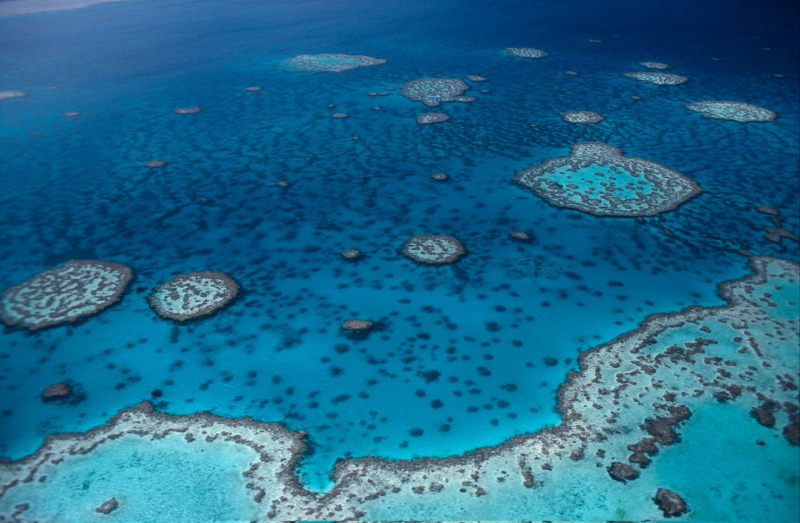 But perhaps Australia’s greatest sight is one you can’t see on land – though you can see it from space. The Great Barrier Reef.

Built by billions of living corals and stretching over 2,600 km, the Great Barrier Reef is one of the wonders of the natural world. Every year, 2 million tourists come to marvel.

As well as bringing in billions of dollars as a tourist attraction, the Great Barrier Reef is a paradise of biodiversity.

It supports 1,500 species of fish, thousands of molluscs, crustacteans, sponges and sea urchins, six of the world’s seven species of threatened marine turtle, more than 30 marine mammals and hundreds of birds.

Yet unsustainable fishing practices, coastal development, pollution and climate change threaten the future of the Great Barrier Reef and marine life in other parts of Australia.

Only a few years ago, less than 5% of the reef was protected from commercial fishing and other damaging activities.

In 2004 we led a successful campaign to give the reef the protection it deserves. A third of the Great Barrier Reef – more than 110,000 sq km – is now under high levels of protection. It’s the world’s largest network of highly protected marine reserves, forming part of a larger multiple-use marine park. Already we’ve seen fish numbers increase dramatically.

Soon after that, we had another big success, this time off the coast of Western Australia where we helped to more than triple protected areas on the 260 km Ningaloo Reef. More than a third of the coral reef is now highly protected, helping turtles, whale sharks and other marine life. With WWF support, the Ningaloo region was also recently nominated for World Heritage listing.

In the Southern Ocean, too, islands which are vital refuges and breeding grounds for endangered species such as albatrosses, have been protected.

The Great Barrier Reef is one of the seven natural wonders of the world.

We want better protection for the Coral Sea outside the Great Barrier Reef itself. It’s a rich marine area that boasts one of the planet’s last great concentrations of sharks and rays.

It’s not just what happens at sea that affects the Great Barrier Reef. We’re currently working to reduce run-off from agriculture and pollution from coastal development that can harm coral.