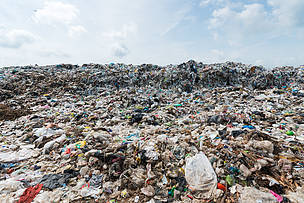 A resolution passed by global leaders at the UNEA-4 meeting - the world’s highest decision making body on the environment - in Nairobi this afternoon failed to begin the process of establishing a global, legally binding deal on marine plastics pollution - a solution advocated by WWF. This outcome came despite a large number of countries acknowledging the need to move towards a globally binding agreement.

“Over eight million tonnes of plastic is dumped into the oceans every year, which could add up to 300 million tonnes by 2030. Today, governments have failed to take action. UNEA-4 was an opportunity for the world’s leaders to make serious and tangible commitments and pledges to combating this global crisis. This is highly disappointing and puts in question the ability of political leaders to listen to the huge demand for action from their citizens,” said Marco Lambertini, WWF International’s Director General.

“We urgently need comprehensive solutions that reflect the local-to-global and systemic nature of this problem. A global agreement is critical in creating a level playing field approach that allows governments and companies to contribute towards a common vision and set of targets, and be held accountable to halt plastic leakage into our oceans.

“This crisis cannot wait another two years for the next round of UNEA talks. We are urging all supportive countries to use this disappointing outcome to accelerate their work towards a global binding agreement on marine plastic pollution.”

A WWF report launched last week warned that without a drastic change in approach, the situation will continue to worsen, with 104 million metric tons of plastic at risk of leaking into the planet’s ecosystems by 2030. Solving Plastic Pollution Through Accountability found that consumers and the waste management industry bear too much responsibility for reducing plastics pollution. The report makes the case for a global deal that holds governments and businesses more accountable for the true cost of plastics to nature and people.

WWF is calling for a treaty that would establish national targets and transparent reporting mechanisms that extend to companies. Additionally, any treaty should provide for financial and technical support for low income countries to scale up their waste management capacity.

1) As the world’s highest level decision making body on environmental issues, UNEA is an opportunity to strengthen international policies to address challenges that are some of the top reasons for biodiversity loss: food, forests, plastics and biodiversity. In these areas, WWF aims to to drive change by pushing beyond business-as-usual approaches, and raise the ambition of countries towards the ultimate goal of stopping and reversing nature loss.

2) Solving Plastic Pollution Through Accountability was written in partnership with Dalberg. For a copy of the report and/or the report’s executive summary, please contact Michael Parsons - mparsons@wwfint.org

3) UNEA-4 also passed a resolution on single-use plastic. With 40 percent of plastics made of single-use items that have a lifespan of a year, the recommended measures at UNEA-4 help address this but will not cover the systemic issue of global plastic production and consumption.

WWF is one of the world’s largest independent conservation organisations, with more than five million supporters and a global network active in more than one hundred countries. Through our engagement with the public, businesses and government, we focus on safeguarding the natural world, creating solutions to the most serious environmental issues facing our planet, so that people and nature thrive.  Find out more about our work, past and present at wwf.panda.org