75% of popular seafood in Singapore not responsibly caught 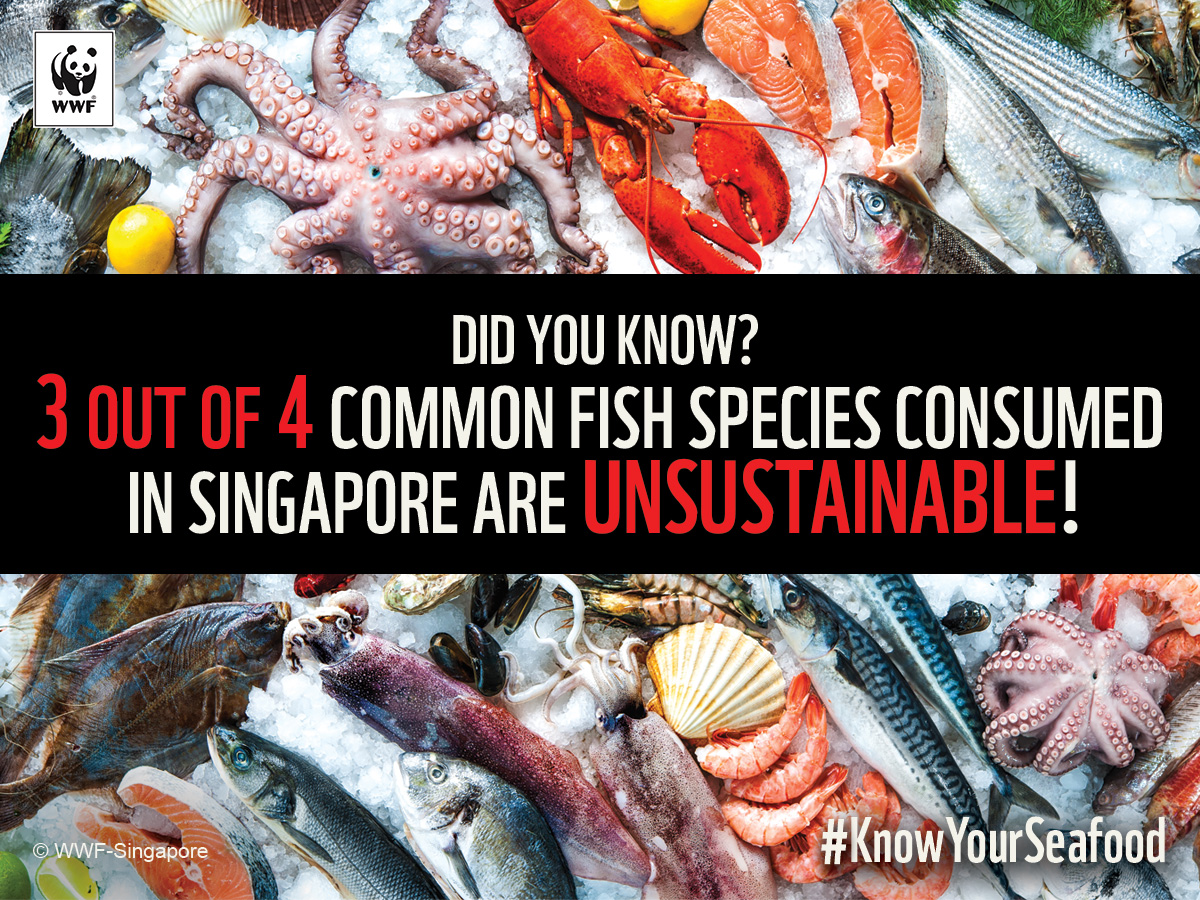 75% of popular seafood in Singapore not responsibly caught

4 October 2016, Singapore – WWF has called for industry and public action to stem the increase of unsustainable seafood in Singapore. The new Singapore Seafood Guide, launched today, highlights the urgency for Singaporeans to make better consumption choices as 3 out of 4 common fish species have been flagged as unsustainable.

The guide evaluates over 40 popular seafood species in Singapore according to an international methodology1. Compared to five years ago, fish varieties used in popular local dishes are now listed as ‘avoid’ in the guide. These include the Indian threadfin (locally known as “Ngoh Hur”) used in fish porridge; silver pomfret, commonly used in Chinese dishes, and yellowbanded scad (or “Ikan Kuning”), a key ingredient in nasi lemak. Without collective and decisive action, these popular fish could disappear from Singapore’s menus within our lifetime.

“We are squandering one of our greatest natural resources by failing to manage our fish stocks sensibly. As one of the biggest consumers of seafood in the world per capita2, Singaporeans have a big role to play in protecting our oceans. The Seafood Guide empowers everyone in the supply chain to make conscious choices that prevent the further exploitation of fish stocks,” said Elaine Tan, CEO, WWF-Singapore.

Responding to the growing crisis, Singapore’s seafood industry – consisting of retailers, hoteliers, restaurants and suppliers – has come together to crowdsource industry solutions at the Sustainable Seafood Business Forum today.

“Our customers are demanding to know where their seafood comes from. Finding alternatives to endangered species on the red list and choosing to work with sustainable suppliers and their products has gone beyond being a corporate responsibility, and become a commercially viable decision for us,” said Lucas Glanville, Executive Chef of Grand Hyatt Singapore, which offers sustainable seafood in all restaurants, event spaces and in-room dining.

The Forum also kick started the Responsible Seafood Group, consisting of local industry leaders such as Global Ocean Link and Marina Bay Sands. Working with WWF-Singapore, they will commit to responsible sourcing standards and pave the way for the rest of the industry to follow suit.

“As one of Singapore’s largest hospitality players, Marina Bay Sands is continuously seeking ways of procuring food in a responsible and sustainable way. Since 2014, we have eliminated sharks fin from the restaurants we own and operate. At that time, we also started serving selected seafood sourced from suppliers that fish or farm responsibly, based on global seafood standards. Today, we are a member of the Responsible Seafood Group, which is another important step towards building a collective sustainable future,” said Kevin Teng, Executive Director of Sustainability of Marina Bay Sands.

WWF cites Finland as an example of how a country with a population similar to Singapore’s can achieve sustainable seafood goals. Today, only 2% of all seafood sold in Finland is on WWF’s red list.

“Sustainability has become an everyday element in Finland’s seafood trade, and companies are very familiar with the origin of the fish they purchase. In addition, over one third of Finns use the seafood guide consciously to make better decisions,” says Matti Ovaska, WWF-Finland’s Conservation Officer.

About WWF (World Wide Fund for Nature)
WWF is one of the world’s largest and most respected independent conservation organizations, with over 5 million supporters and a global network active in over 100 countries. WWF’s mission is to stop the degradation of the earth’s natural environment and to build a future in which humans live in harmony with nature. WWF-Singapore’s campaigns centre around sustainable consumption, raising awareness and prompting action on issues such as deforestation, haze pollution, seafood sustainability and the illegal wildlife trade. wwf.sg

Background Information
By 2025, WWF aims to ensure the resilience of the world’s fisheries and oceans by creating integrated Marine Protected Areas (MPAs), supporting the livelihood and biodiversity of fisheries and eliminating destructive fishing practices.

Factors such as climate change, pollution, population growth and poorly planned development have halved the populations of marine species since the 1970s. Incremental demand has led to two-thirds of global fish stocks being over exploited. Unless the current situation improves, stocks of all species currently fished for food are predicted to collapse by 2048.

1WWF, together with the North Sea Foundation and the Good Fish Foundation, has developed methodologies to assess the environmental sustainability of the origins of seafood species from wild-capture fisheries and aquacultures.
2People in Singapore consume about 22kg of seafood per person yearly, more than the global average of 20kg.
PrevBack to Previous Page
NextNext

75% of popular seafood in Singapore not responsibly caught
DOWNLOAD