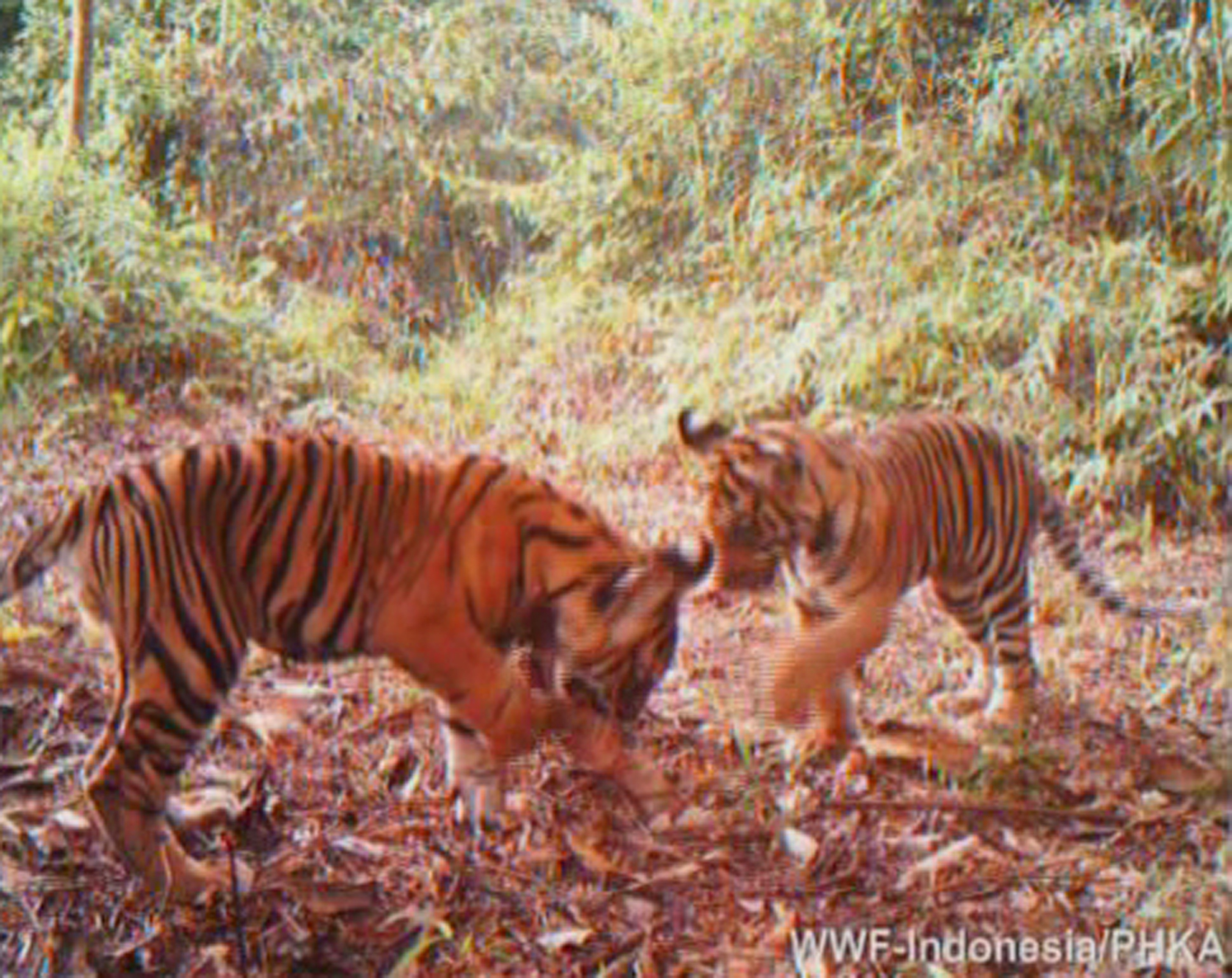 “Our team was thrilled to discover 47 tiger images in our camera traps, from which we identified six unique individuals,” said Karmila Parakkasi, who leads WWF’s tiger research team in Sumatra. “That was the highest number of tigers and tiger images obtained in the first month of sampling we’ve ever experienced. And then the results from the second month were even more impressive—not just one tiger family but two, with another six tigers.”

Video footage of the tigers can be downloaded here and still images here. Maps of the Bukit Tigapuluh landscape can be found here.

The forest where the tigers were recorded is under imminent threat of being cleared by the pulp and paper industry, despite being designated a “global priority Tiger Conservation Landscape”. It is one of six the government of Indonesia pledged to protect at last November’s tiger summit of world leaders in Russia. The area, known as Bukit Tigapuluh, or “Thirty Hills”, is located in Riau and Jambi provinces in Central Sumatra.

There are an estimated 400 critically endangered Sumatran tigers left in the wild. Evidence of three cubs surviving is extremely rare, WWF tiger experts said, and was captured by cameras located in the forest that are triggered by infrared sensors.

“What’s unclear is whether we found so many tigers because we’re getting better at locating our cameras or because the tigers’ habitat is shrinking so rapidly here that they are being forced into sharing smaller and smaller bits of forests,” said Parakkasi.

WWF’s analysis found the tigers are concentrated in locations with good forest cover, which includes natural forest areas inside a land concession belonging to a subsidiary of Barito Timber Pacific. As soon as pending permits are granted by the government, the company could clear the forest to supply the wood to Asia Pulp & Paper of Sinar Mas Group. Prominent conservation groups including WWF have urged the two companies and the government of Indonesia to protect these forests instead.

“This video confirms the extreme importance of these forests in the Bukit Tigapuluh ecosystem and its wildlife corridor,” said Anwar Purwoto, director of WWF-Indonesia’s Forest and Species Program. “WWF calls for all concessions operating in this area to abandon plans to clear this forest and protect areas with high conservation value. We also urge the local, provincial and central government to take into consideration the importance of this corridor and manage it as part of Indonesia’s commitments to protecting biodiversity.”

The Sumatran tiger and the other five surviving tiger subspecies – the Amur, Malayan, Bengal, Indochinese and South China – number as few as 3,200. WWF is working to build the political, financial and public support to double the number of tigers in the wild by 2022.

The Bukit Tigapuluh landscape includes a national park and the surrounding buffer zones with close to 320,000 hectares of natural forest. Only 42 percent of the remaining forest is under protection as Bukit Tigapuluh National Park. It is the largest of the last remaining dry lowland forest blocks in Sumatra and contains one of the broadest collections of Sumatran megafauna and flora, with close to 200 bird species and 59 mammal species.

The Bukit Tigapuluh landscape was designated a global priority tiger conservation landscape in “Setting Priorities for the Conservation and Recovery of Wild Tigers: 2005–2015,” which was produced by the world’s leading scientists. The categorization means it offers the highest probability of persistence of tiger populations over the long term.

The landscape is also one of the six priority landscapes that the Government of Indonesia committed to protecting for Sumatran tigers at tiger summit of world leaders in Russia in November 2010.