Climate change and deforestation in the Heart of Borneo could be a deadly combination – new report warns. 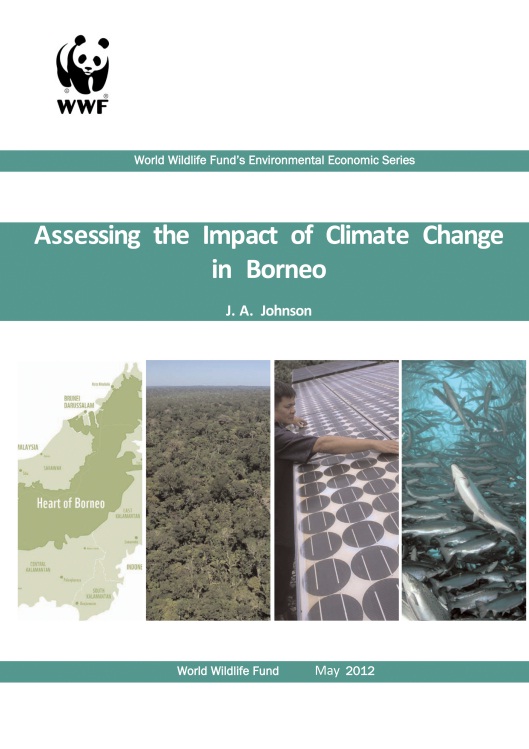 Climate change and deforestation in the Heart of Borneo could be a deadly combination – new report warns.

Jakarta, Indonesia: The release of a new report: ‘Assessing the Impact of Climate Change in Borneo’, reveals that the Heart of Borneo (HoB) will face increasing detrimental effects from climate change in the years to come.

WWF projections indicate that if the island of Borneo continues at its current rate of natural capital loss through deforestation, it will be severely affected by climate change through the increased risk of floods and forest fires, human health impacts, changes in agricultural yields and damages to infrastructure. Sea level rise is also projected to cause widespread damage to population centers, causing considerable economic damage and costs to local governments, communities and businesses. In addition, with two degrees of warming, Borneo’s rich biodiversity in marine, reptile and amphibian species will be severely affected, and potentially devastated by any warming beyond this level by 2050.

This report follows the release on June 5, World Environment Day, of the joint WWF and Asian Development Bank (ADB) report: Ecological Footprint and Investment in Natural Capital in Asia and the Pacific, which warned of dwindling natural capital in the Asian-Pacific region and the dire pressure that was placing on remaining eco-system services.

“The forests of the Heart of Borneo, are critically important, both the well being of people locally and globally, for their extremely rich and unique biodiversity, carbon sequestration potential and a variety of other life-giving services linked to food, water and energy security. The preservation of Borneo’s forests and ecosystems is one of region’s most pressing priorities, a lack of action means we are putting economies, livelihoods and species at grave risk,” Mr Tomasek said.

Deforestation and forest degradation account for up to 20 per cent of global man-made CO2 emissions. The forests of Borneo and the species that depend on them are currently under siege by unsustainable logging, conversion due to commercial operations, especially oil palm plantations and coal mines, as well as forest fires and wildlife poaching.

Inspiring tri-government action
Mr Tomasek said he was encouraged by the foresight shown by the three HoB government working parties to put their combined support behind a green economy approach at  the forthcoming Rio+20 Summit, to be held in Brazil in June 19-22.

He said the rapidly emerging green economy approach, offers the best solution for sustaining the needs of business, governments and their citizens in Borneo, while at the same time protecting the rich biodiversity of the island and lowering carbon footprints.

“With the overwhelming trend for growing industrial land development, over consumption and urbanization, we can only sustain and conserve our vital natural areas (such as the HoB), by working with business and governments to adopt a green economic system in this region,” Mr Tomasek said.

Indonesia sets an example at the highest level
The findings of the report appear to have been already acknowledged at the highest level within the Indonesian government, with President Susilo Bambang Yudhoyono recently declaring the pursuit of a green economy and sustainable forestry as critical to the country’s sustainable development and climate change mitigation efforts.

Speaking at the Center for International Forestry Research (CIFOR), in Bogor, Indonesia on June 13, the President said the government could use policy measures, laws and regulations to place sustainability at the heart of social activities; and also incentivize and reward activities that reinforced sustainability.

Notes to editors
A full copy of the report is available for download at
http://awsassets.panda.org/downloads/report_assesing_the__impact_of_climate_change_in_borneo.pdf

What is the Heart of Borneo (HoB)?
The Heart of Borneo covers more than 22 million hectares (220,000 km2) of equatorial rainforest across the countries of Brunei Darussalam, Indonesia and Malaysia. One of Asia’s last great rainforests, it includes some of the most biologically diverse habitats on earth, and is one of only two places on earth where elephants, orangutans, rhinoceros and clouded leopards share the same territory. In the past 15 years, more than 500 new flora or fauna species have been discovered, at a rate of more than three per month.

Borneo’s cultural diversity is as distinct and varied as the island’s animal and plant life. In Kalimantan (Indonesia) alone, 142 different languages are believed still to be in use today. Many people depend directly on the forest for edible and medicinal plants; fish; meat; construction materials and water.

As the headwaters of the island’s major rivers lie in Borneo’s central highlands, protection is critical to ensuring reliable clean water supplies to a large number of human settlements, and the thriving industries that have developed in coastal urban centres.

The Heart of Borneo Declaration
In February 2007, the governments of Brunei Darussalam, Indonesia and Malaysia signed the Heart of Borneo Declaration to protect an area of more than 220,000 square kilometres in the centre of the island and bordering all three countries. Together they emphasised the  fact that these tropical rainforests have strategic, global, national and local functions, not only for citizens of these three countries but for the global human race.

About WWF – WWF is one of the world’s largest and most respected independent conservation organizations, with over 5 million supporters and a global network active in over 100 countries. WWF’s mission is to stop the degradation of the Earth’s natural environment and to build a future in which humans live in harmony with nature, by conserving the world’s biological diversity, ensuring that the use of renewable natural resources is sustainable, and promoting the reduction of pollution and wasteful consumption. Visit panda.org/news for latest news and media resources.