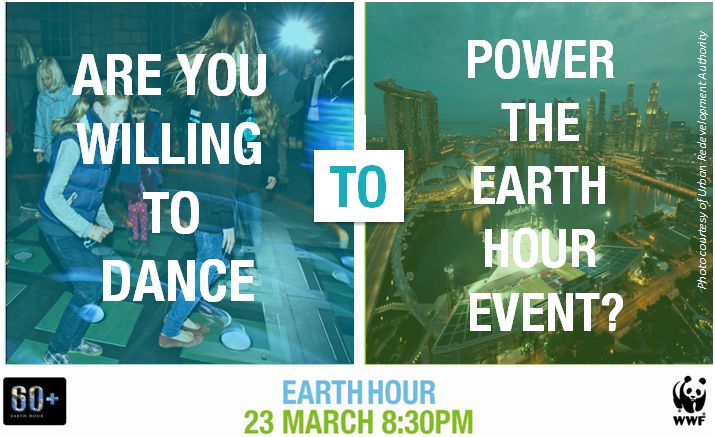 For the first time, the public will play an active role in powering up the event to be held at The Float@Marina Bay, by busting their moves on energy absorbing pads to convert the kinetic energy produced to electricity. This energy will be used to power an outdoor film screening, organised as part of Earth Hour‟s activities for the night, in celebration of the world‟s hope and commitment towards a low carbon future. Other activities for the evening also include an eco-carnival and concert.

“Energy is essential in our daily lives – it drives our transport systems, electronics and infrastructure. While we cannot do without it, we can certainly ask ourselves: how we can use this energy more effectively and efficiently? Are there more sustainable sources that we can turn to, and at the same time safeguard our planet‟s resources? Through this year‟s Earth Hour interactive dance-out event, we hope to spark the public’s imagination about energy usage and the impact it has on our environment,” said Elaine Tan, CEO, WWF-Singapore.

The Singapore event this year will also be the showpiece for the Earth Hour global movement, celebrated in more than 150 countries since the re-location of the Earth Hour Global team from Sydney to Singapore in July 2012. “Earth Hour today is about building a global community to show what one person’s actions can inspire. Singapore, with its position in the heart of a growing Asia, is an ideal location from which this inspiration can spread to influence the larger community in the region. The central location for the event – The Float@Marina Bay – will be visually stunning and inspirational, as Singapore comes together to celebrate its commitment to the planet with the city‟s iconic skyline switching off as a backdrop,” said Andy Ridley, CEO and Co-founder, Earth Hour Global.

“We are happy to show our support for this meaningful event by being a venue sponsor for Earth Hour 2013. The event is very much in line with our efforts to develop Marina Bay as a sustainable precinct. We encourage all our Marina Bay stakeholders to be part of Earth Hour 2013 to renew our commitment to a more sustainable Marina Bay,” said Fun Siew Leng, URA Group Director for Urban Planning & Design.

The public can register their participation from 24 January 2013 onwards for the Dance 2 Power Earth Hour event via the Earth Hour microsite at http://earthhour.wwf.sg/. Registration fees start at S$20 and S$10 for children under the age of 12. Participants will also receive a goodie bag filled with environmentally friendly products.

In 2012, the Earth Hour campaign in Singapore received the highest level of support since its inception in 2009. WWF-Singapore saw more than 6,000 participants gathered at Ngee Ann City for the official Lights Out ceremony with over 400 organisations pledging their support, from switching off their lights to proactively engaging staff, customers and other stakeholders in various initiatives to protect the environment. Over 1,500 Earth Hour ambassadors also formed a spectacular and unprecedented Earth
Hour “60+ Singapore” human formation on Singapore‟s iconic shopping street.

Earth Hour 2013 is made possible with the support of Urban Redevelopment Authority (URA) as the Official Venue Partner for the Lights Out event to be held at Marina Bay Singapore as well as partners – Leo Burnett, Mindshare, The Singapore Scout Association and Weber Shandwick.