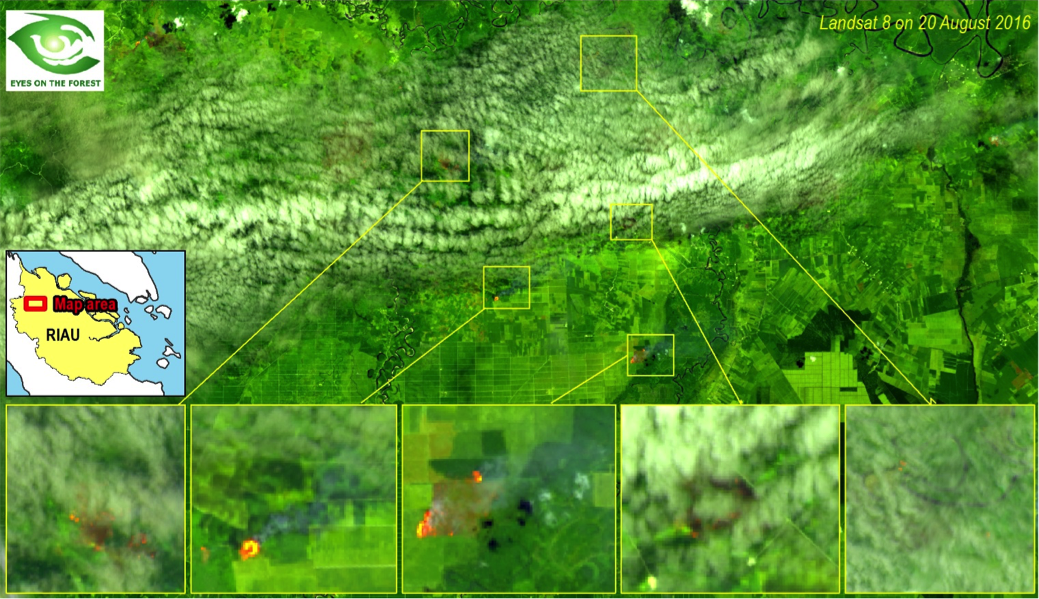 After the devastating fire season of 2015, Riau started to burn again in August 2016. Winds were easterly and Singapore’s air quality dropped dramatically. NASA FIRMS 375 meters resolution VIIRS active fire data recorded almost 1,900 fire locations in August alone, around a quarter of all of Riau’s hotspots in the month. After seeing the actual flames of many fires on a Landsat image of 20 August (Map 1) and tall smoke plumes of fires rising from the area on a MODIS image of 25 August.

Eyes on the Forest investigators checked the area early September by drone. The video released today reveals the vastness of the destruction.

The day after the EoF investigation, according to reports by many media outlets, seven Ministry of Environment and Forestry investigators were taken hostage and kept for several hours by a mob after investigating the APSL company for alleged clearing of around 3,000 hectares of deep peat and natural vegetation by deliberate burning.

Indonesia’s Minister of Environment and Forestry, Siti Nurbaya Bakar, condemned the mob of around 100 people who forced the officials with death threats to delete images and video footage that provided proof of irregularities found during their investigation. “We strongly suspect that the action was mobilized by the company, which pretends to speak on behalf of farmer groups,” she said in a statement.

Ms Siti said her ministry’s main priority now is an investigation into APSL as its “palm oil plantation in the area is illegal” and her investigation team managed to save data for some 2,000 ha of land burnt by APSL workers pretending to be farmers.

EoF learns that PT APSL is defeated at a dispute land court case that prosecuted by Pekanbaru District Court in 2014-2015 where a local farmer group Kelompok Tani Sawit Jaya of 75 farmers filed a lawsuit against the company for grabbing their land. The company was also accused of having no fundamental HGU license but only location licenses issued by Rokan Hilir and Rokan Hulu district heads (katakini.com, 16 Dec 2014).

At a trial at Rokan Hilir district court in August 2015, a witness from Riau Agroforestry Service told the court that PT APSL had no license for operation and was not registered at the province agency’s data. While, another witness from Forestry Service said that PT APSL sat inside Production Forest (Hutan Produksi) area based on Minister of Forestry’s decree (spiritriau.com, 31 Aug 2015).

The EoF video launched today includes a Landsat image of 13 September, on which burn scars confirm that almost 10,000 hectares of peat in and around the illegal plantation were burnt. In the area, peat is often 2-4 meters deep (Wahyunto et al. 2003).

Video can be accessed at: EoF drone video in burnt area of Libo block

To know who’s causing the haze and how to #XtheHaze, sign up here: wwf.sg/xthehazeweb