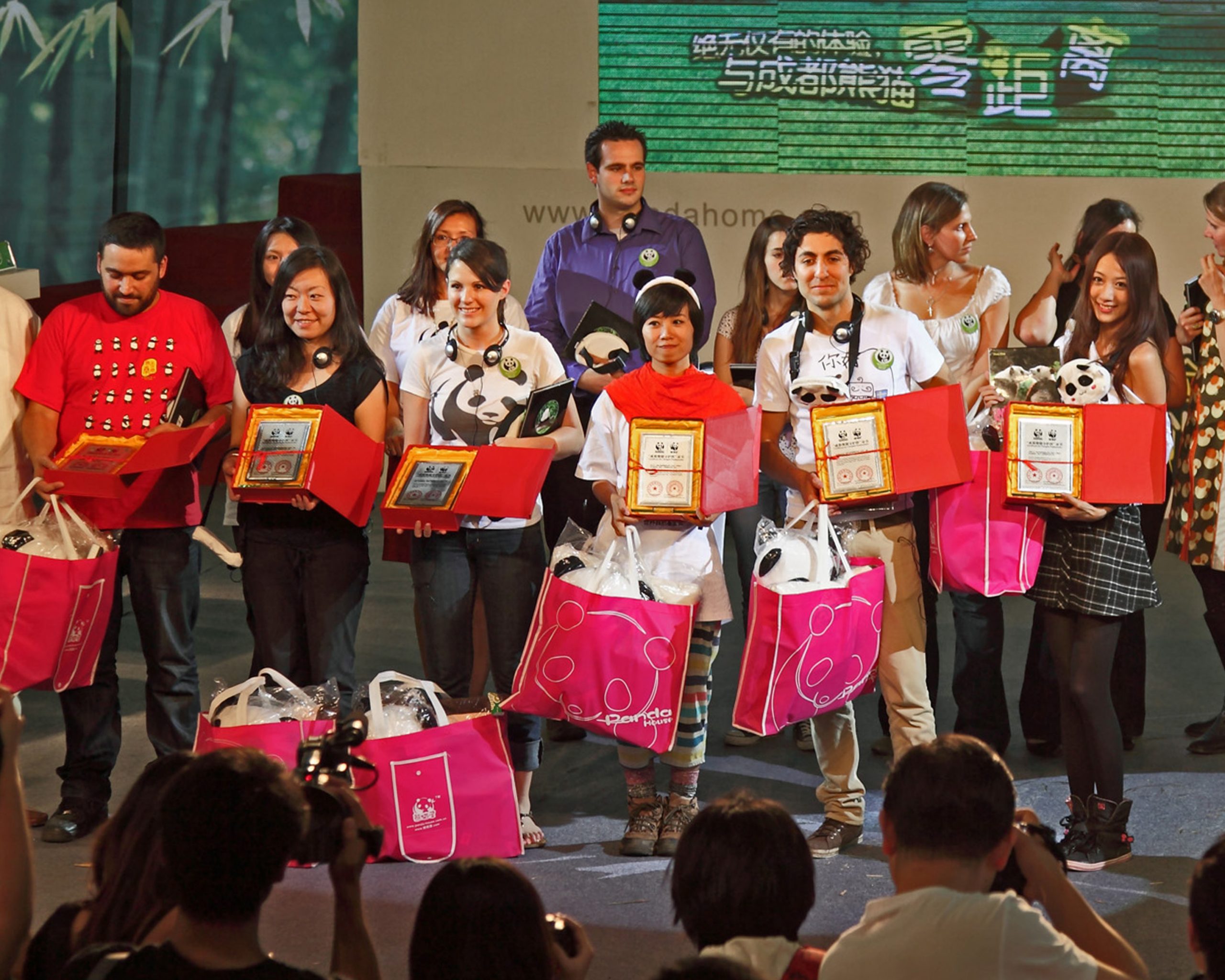 Chengdu, China – Six lucky candidates have been awarded the highly coveted opportunity to work as panda caretakers for one month, after an intense three-hour live showdown on China’s largest television network, CCTV.

Of the 12 semi-finalists, judges at the Chengdu Panda Base awarded the 6 final “Pambassador” jobs to Ali Shakorian from Sweden, Ashley Robertson from the United States, David Algranti from France, Chinese national Huang Xi, Wang Yuwen from Taiwan, and Yumiko Kajiwara from Japan.

“Although we selected six Pambassadors, all twelve finalists are winners. They all did an amazing job”, said Dr. Zhang Zhihe, Director General of the Chengdu Research Base of Giant Panda Breeding.

During the semi-finals, the twelve candidates showcased their talent in front of a group of distinguished judges including one of China’s most renowned panda experts, Hu Jinchu, and American wildlife artist John Banovich. Judges evaluated their overall performance during the competition, and tested the knowledge candidates acquired during their week-long training session.

“I would like to congratulate these enthusiastic and conservation-savvy young people who came all the way to Chengdu to participate in this exciting competition. The title Pambassador brings a great deal of responsibility with it, since each has a stake in the conservation of one of the worlds most threatened species,” said Jing Hui, communications director at WWF China to the six winners.

The twelve intrepid candidates experienced an intense and whirlwind training week. Not only did they acquire scientific knowledge about giant panda conservation and care, but they also lent a helping hand with daily activities at the Panda Base, such as building exercise ladders for giant pandas, preparing meals, cleaning their enclosures and even weighing their excrement.

Starting October 1st, the six finalists will spend three weeks at the Chengdu Panda Base where they will learn about all aspects of giant panda care, breeding and conservation. One of their most important stops will be a WWF conservation site at the Longxi-Hongkou Giant Panda Nature Reserve, to gain hands-on experience monitoring and patrolling for pandas in the wild.

The “Pambassadors” will also blog about their daily experiences and share their stories with people all over the world in the coming month at http://pandahome.com/.

Over the two month application period, 61,600 panda lovers from more than 52 countries and regions applied for the six jobs. The global search for was later narrowed from 60 candidates to 12 semi-finalists through online voting.

As a proud technical supporter of the Project Panda campaign, WWF China not only shared panda conservation knowledge with the 12 semi-finalists, but also sent experts to serve as panel judges for the competition.

“The key to panda conservation is to protect the wild panda population and its natural habitat. Through this campaign, we hope to raise public awareness on the threats and challenges that wild pandas face and encourage more people to join conservation efforts to protect pandas and their homes in the wild,” said Jing Hui.

Invited by the Chinese government to protect the giant panda some thirty years ago, WWF has played an important role in the establishment of China’s national panda conservation network. It now consists of 62 nature reserves, key corridors, and forest farms that cover 71 per cent of the giant panda population and 57 per cent of its habitat.