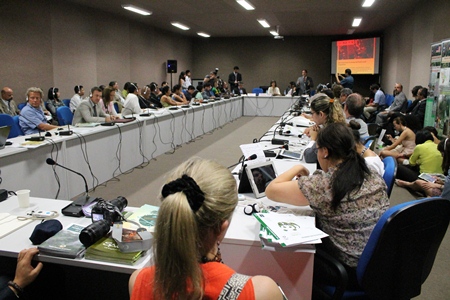 At one of WWF’s most popular side-events at Rio+20, entitled Forest Green Economy and South-South Cooperation, two states on opposite sides of the world, showcased the steps they were taking to preserve their rainforests.

Government delegates from Acre, deep in the Brazilian Amazon, and Sabah, home of the iconic orangutan in the Malaysian part of Borneo, gathered to passionately discuss their efforts at moving towards a green economy.

Both governments explained how they are finding ways to sustainably use their forests to generate income and employment for their local communities while reducing human impact on the planet and keeping within environmental limits.

This event profiled the historical signing of a new Memorandum of Intent between the two states to achieve a green economy with an emphasis on south-south cooperation. Both have committed to holding the line on where the forests should stand in the future.

“Today we can show to Brazil and the world, a model that demonstrates that you can live, produce and preserve in the Amazon,” said Tiao Viana, the Governor of Acre.

Tiao Viana spoke about the need for more money from the private sector to help make the green economy a reality, and how that was something they’re trying very hard to make a reality in the Amazon State.

The Director of Sabah Forestry Department, Datuk Sam Mannan, spoke about the need for practical action to tackle deforestation – and for a new way of thinking to build an economy that’s sustainable in both economic and environmental terms.

According to Maria Cecilia Wey de Brito, CEO of WWF-Brazil who was present at this significant moment for the Green Economy movement, the collaboration of Acre and Sabah shows concrete actions towards sustainable development, from which we can all be inspired.

“The coming together of these two subnational governments is a demonstration that two regions with similar features and incredible biodiversity, even if they are far apart, have much to exchange with each other,” she said.

WWF is working in partnership with the Acre state government on a green system where people are encouraged to make a living from standing forests. Meanwhile, over in Sabah, they are stemming the tide of destructive palm oil production by calling for a stop to the practice of land-grabbing. This is one of many examples of how WWF is working with local governments on the ground to develop a Green Economy vision.