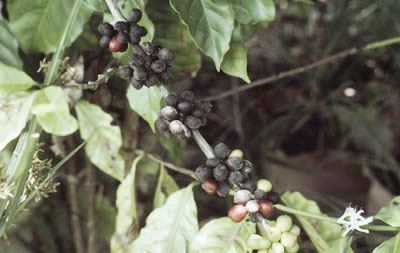 Gland, Switzerland/Jakarta, Indonesia – Coffee lovers the world over are unknowingly drinking coffee that was illegally grown inside one of the world’s most important national parks for tigers, elephants and rhinos, says WWF.

The illegally grown coffee is mixed by local traders with legal coffee beans and exported from Indonesia to companies such as Kraft Foods, Nestlé, Lavazza and Marubeni, according to the global conservation organization. Neither exporting nor importing companies have mechanisms in place to prevent the trade of illegal beans.

Using satellite imaging, interviews with coffee farmers and traders, and monitoring of coffee trade routes, WWF tracked the illegal cultivation of robusta coffee inside Indonesia’s remote Bukit Barisan Selatan National Park all the way through its export routes to multinational coffee companies and the shelves of grocery stores across the US, Europe and Asia.

Bukit Barisan Selatan, a World Heritage Site on the southern tip of Sumatra Island, is one of the few protected areas where Sumatran tigers, elephants and rhinos coexist. It is one of the most important habitats left for the three endangered or critically endangered species. But it has already lost nearly 20 per cent of its forest cover to illegal agriculture, according to WWF.

“If this trend of illegally clearing park land for coffee isn’t halted, the rhinos and tigers will be locally extinct in less than a decade,” said Nazir Foead, WWF-Indonesia’s Director of Policy and Corporate Engagement.

“We think even the world’s most committed coffee drinkers will find this an unacceptable price to pay for their daily caffeine buzz.”

Indonesia is the world’s second-largest exporter of robusta, which is often used in instant and packaged coffee. At least half the country’s coffee is exported through the port of Lampung, adjacent to the national park.

WWF’s investigation found that farmers were growing coffee on more than 45,000 hectares of park land, producing over 19,600 tons of coffee annually there. Most wildlife has already abandoned those areas. The coffee is exported to at least 52 countries.

WWF determined that most of the companies buying the coffee likely were unaware of its illegal origins, based on the lack of regulations in the region, and provided draft copies of the report’s findings to the top recipients of Lampung coffee tainted with illegal beans from Bukit Barisan Selatan. Some companies denied any purchase of illegally grown coffee, while others are in discussions with WWF on how to avoid purchases of tainted coffee, boost production of sustainably grown coffee and restore wildlife habitat in the park.

“WWF doesn’t want to shut down the coffee industry in Lampung Province,” Foead said. “But we are asking multinational coffee companies to implement rigorous chain-of-custody controls to ensure that they are no longer buying illegally grown coffee, and we’re asking the Indonesian government to better protect the park.”
WWF is also asking involved coffee-buying companies to work with local Sumatran growers to provide incentives to switch to sustainable coffee production. The report recommends that the park and local authorities prevent further encroachment into the park and develop regulations that prevent illegally grown coffee from infiltrating international trade.

• The United States, Germany, Japan and Italy were the largest importing countries of tainted Lampung coffee in 2004 and 2005, accounting for more than 50 per cent of all coffee imports from the region. Other significant recipient countries include Algeria, India and the United Kingdom.

• Taloca, Kraft and Nestlé were the top recipients of coffee from Lampung in the years 2003, 2004 and 2005, respectively. Other companies identified as recipients of Lampung coffee include Marubeni, Itochu, ED&F Man, Andira, Nestle, Lavazza, J. Mueller Weser, Pacorini and World Transport. Folgers (P&G) and Tchibo received small shipments of coffee from Bandar Lampung’s exporters in 2004.

• Nestlé has responded to the report, launching an effort to clean up part of its supply chain and advise farmers on how to produce higher quality coffee. Some of the coffee companies approached by WWF have also indicated they are willing to support the development of sustainable, legal coffee production outside the park. This would ensure a reliable market for coffee farmers and provide a reliable, sustainable source of legal coffee for the companies. And the park’s rhinos, tigers and elephants will benefit from having production and its subsequent environmental damage moved outside the park boundaries.

• To further this effort, WWF has entered into an alliance with ForesTrade, a company with a long history of establishing sustainable development programs in Sumatra, and Rainforest Alliance, an organization best known for its global efforts to certify sustainably produced coffee. WWF is also in discussions with the new Common Code for the Coffee Community Association (4C), whose founding members include several recipients of illegal coffee. The aim is to encourage 4C members to help prevent further damage to the national park and undo the damage coffee production has already done to the park and its wildlife.

• The Bukit Barisan Selatan National Park is believed to be home to approximately 40 adult tigers. There are fewer than 400 Sumatran tigers left in the wild and they are considered critically endangered. The park is home to an estimated 500 Sumatran elephants, 25 per cent of the remaining population of the endangered subspecies. It is also home to an estimated 60-85 Sumatran rhinos, the largest population on the island, where they are found in only three other national parks. Sumatran rhinos are critically endangered.

Gone in an Instant: How the trade in illegally grown coffee is driving the destruction of rhino, tiger and elepant habitat: Website

More on the Sumatran tiger