It’s In Black and White 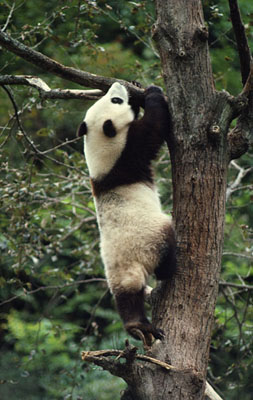 It’s In Black and White

IN 1961, Chi-Chi the panda became the poster child – er, poster panda – of international environmental conservation group WWF (then known as the World Wildlife Fund). Since then, the cuddly panda has been adopted as the logo of WWF, luring the international community into caring about endangered species, biodiversity and all things green. Now a new, albeit fictional, panda named Xi Hua hopes to repeat her predecessor’s success in Singapore.

She is the protagonist of Malaysian writer Shamini Flint’s new children’s book Panda Packs Her Bags, which is launched today. “We should focus on the planet for the next generation, and reach out to children as that next generation,” says Flint, 36, who is based in Singapore and has two young children of her own.

The book tells the story of a panda searching for a new home and is vibrantly illustrated in acrylic by Singapore-based Swedish illustrator Mariann Johansen-Ellis. Part of the proceeds go to WWF. The Singapore branch of WWF, which opened in March, is helping to launch the book at an event today at Bookaburra bookstore, featuring a talk on panda conservation by a WWF representative, face painting and lucky draws.

The book is the second in Flint’s “endangered animal series”, which started in 2005 with Jungle Blues, about a tiger named Hari. Like Panda Packs Her Bags, all her other books are printed on recycled paper, with proceeds going to relevant charities. She is also the author of the Singapore murder mystery Partners In Crime, which kick-started the new Singapore Book Club this month; and the Sasha In Singapore and Sasha In Asia series, children’s books featuring her real-life four-year-old daughter Sasha.

The former corporate lawyer, who is married to foreign exchange strategist Simon Flint, also 36, says she started writing when she could not find high quality children’s books with a local context for her daughter. Says Flint: “I’m terrified of her not knowing her roots or this part of the world.”

So she started Sunbear Publishing in 2004 to fill that niche in the South-east Asian literary market. As if promoting cultural awareness and environmental conservation were not enough, she also encourages ethical consumerism with her fair-trade tea and coffee import business Spencer Holdings, named after her two-year-old son Spencer. The fair-trade label means that coffee farmers and tea plantation workers receive better profits and education about their industry.

Asked why readers should care about pandas, or endangered animals, for that matter, Flint recounts the time her daughter Sasha burst into tears on a visit to the Jurong BirdPark last year. Looking at the snowy owls, which Flint had adopted with proceeds from her Sasha In Singapore series, the sobbing girl said she never wanted to see the owls again. The bemused mother asked her why, and she replied: “I don’t want to see the last snowy owl.”

Neither should she have to see the last panda.

Panda Packs Her Bags is available at bookstores for $18 without GST.