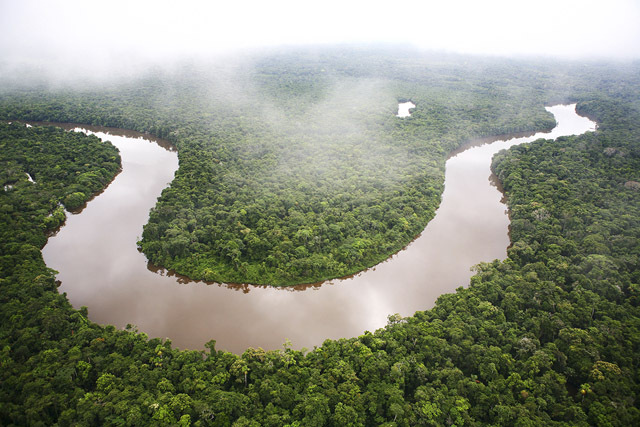 Deep in the Amazon rainforest, dozens of indigenous communities live in voluntary isolation from the modern world. It’s a safe bet their daily routine looks quite different from yours.

Yet the rainforest that’s been their home for centuries is vital to each and every one of us. Keeping it standing is vital.

As the world’s largest tropical forest, the Amazon plays a crucial role in regulating our climate: its living trees store huge amounts of carbon, and water evaporates from the surface of their leaves.

It’s also home to one in ten species known to science. Scarlet macaws, harpy eagles, anacondas, jaguars, river dolphins, manatees, giant otters and piranhas are just some of the species that live there.

But the Amazon faces huge threats – from cattle ranching and agriculture, logging and climate change. Every minute, an area the size of three football pitches is destroyed. Without protection, huge areas could be wiped out in a generation.

Scientists fear that if 10% of what remains is lost, it could push the Amazon beyond a “tipping point”. The forest would degrade into savannah and grassland, releasing vast amounts of carbon and further destabilizing the world’s climate.

Thanks in part to our work, more than four-fifths of the Amazon is still in good condition.

Back in the 1970s, our tropical rainforest campaigns helped alert the world to the perils facing forests such as the Amazon. Since then, we’ve been working to increase protection for the forest and reduce the impact of development.

In 2002, we formed a partnership with the government of Brazil , World Bank, German Development Bank and others to protect 12% of the Brazilian Amazon. To date, we’ve helped double the area of rainforest under protection, creating more than 250,000 sq km of national parks and nature reserves. That’s an area larger than the UK. And we’re aiming to add almost as much again by 2015.

In Peru, we supported the creation of Alto Purús National Park, one of the largest protected areas in the Amazon. This challenged years of illegal logging and poaching that threatened the area’s extraordinary biodiversity, as well as the people who live there. Its location also helps to link the Amazon of Peru, Brazil and Bolivia.

The Amazon is the world’s largest river basin, discharging more than 200,000 m3 of water into the ocean every second.

We’re working with the governments of the eight countries and one overseas territory of the Amazon to forge a chain of protected areas across the entire region. Ultimately, we hope to see Amazon countries managing the forest as one living entity.

We’re also working with the industries that have the biggest impact on the Amazon – including timber and paper, beef and soy, mining – to promote sustainable and lower impact business models.

For example, since 2006 we’ve helped persuade companies not to buy soy from recently deforested land in Brazil. As a result, less forest is being cleared, while soy yields have actually increased.