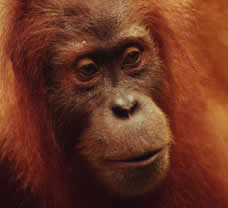 Indonesia’s new 10 year action plan for conserving orangutans will have important benefits in mitigating climate change, according to WWF .

These benefits were underlined by the launch of The Orangutan Conservation Strategy and Action Plan (2007 – 2017) during the Bali Climate Change Conference. Deforestation, for timber, pulp and palm oil plantations, have pushed Indonesia into the status of being a major carbon emitter, while threatening globally significant wildlife populations.

“In the last 35 years about 50,000 orangutans are estimated to have been lost as their habitats shrank. If this continues, this majestic creature will likely face extinction by 2050,” said Indonesian President Susilo Bambang Yudhoyono at the launch of the plan.

As a mostly fruit eating primate, the orangutan also has a key role in forest regeneration as it disperses seeds which help regenerate more fruit trees, which in turn helps keep the forest healthy. Although the main threat to the orangutans – often called “the red man of the jungle” – comes from forest destruction and habitat conversion, orangutans are also still being hunted, traded and also smuggled out of the country for pets
“It’s opportune this Action plan is finalized this week, as the world gathers in Indonesia to make critical decisions on climate change”, says Dr. Susan Lieberman, Director of WWF’s Global Species Programme. “Protecting orangutan habitat, especially in the peat swamp forests which contain significant carbon sinks, means both a secure future for the orangutan, and avoiding carbon emissions from the forest.”

As part of the orangutan conservation plan developed by the forestry ministry and NGOs, Indonesia will aim to stabilise orangutan populations and habitat from now until 2017 and return orangutans housed in rehabilitation centres to the wild by 2015.

The Indonesian Ministry of Forestry led the finalization for this blue print for orangutan conservation and involved key players and a range of experts at both the national and international level. WWF has been actively involved in developing the plan and is part of the small team that finalized the document.

Report Climate Change in Indonesia – Implications for Humans and Nature