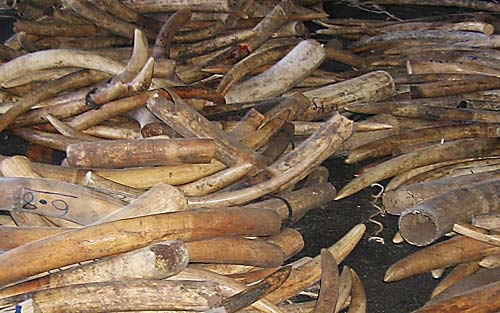 Manila, Philippines – Authorities in the Philippines tomorrow are expected to destroy more than five tonnes of seized elephant ivory accumulated through enforcement actions.

The ivory tusks are set to be crushed using road rollers. The move is aimed at sending a strong signal that the Philippines is taking firm action against the illegal ivory trade, and will also remove any possibility of the country’s ivory stockpiles leaking back into illegal trade.

In 2007, TRAFFIC drew world governments’ attention to the leakage of ivory from government held stockpiles in the Philippines, through a presentation to the Convention on International Trade in Endangered Species of Wild Fauna and Flora (CITES) of the results of an analysis of global ivory seizure records contained in the Elephant Trade Information System (ETIS).

ETIS is the world’s foremost database of elephant product seizures, providing insights into all aspects of the illicit ivory trade. TRAFFIC has managed ETIS on behalf of parties to CITES since 1989 and today contains more than 18,000 cases.

The ETIS analysis in 2007 notes “the largest ivory seizure ever made in the Philippines, possibly as much as 3.7 tonnes of raw ivory in 2006, subsequently disappeared from the custody of Manila customs under corrupt circumstances.”

“While destroying ivory puts it out of temptation’s way, an essential element of such an act is that the stockpiles are fully and transparently audited so that it is clear what ivory is being taken out the system and where it originated—only then can outside observers have real confidence in the integrity of the ivory removal,” said Dr Colman O Criodain, WWF’s wildlife trade policy analyst.

Following the announcement about the ivory destruction, TRAFFIC contacted the Protected Area and Wildlife Bureau in the Philippines and was informed an ivory audit would be taking place, with other agencies including the National Bureau of Investigation present.

“Ivory is known to have disappeared from a number of government-held stockpiles worldwide, so it is vital that proper protocols are established and adhered to during ivory destruction events, such as independent verification that the quantity of ivory destroyed corresponds to what was audited,” said O Criodain.

TRAFFIC also understands the ivory will be DNA analysed—to obtain information on its geographical origin. TRAFFIC and WWF fully support the move to introduce routine forensic analysis of large-scale ivory seizures, which was agreed by governments in March this year, at the Conference of the Parties to CITES.

In 2007, ETIS analysis highlighted the role of the Philippines, both for its domestic ivory trade and for the role of the country as a transit point for ivory originating from Africa or elsewhere in Asia and en route to markets in China.

The analysis identified the Philippines as one of the “major transit points in the illicit trade,” and also noted “a new carving industry producing religious sculptures and artefacts has recently been identified in the Philippines that may be linked to an export trade to Italy, the Holy See and perhaps other destinations.”

Overall, the situation in the Philippines was described by TRAFFIC in 2007 as “most worrying”.

In the most recent ETIS analysis, presented to CITES parties in March this year, the Philippines was among the nine countries and territories identified as being most heavily implicated in major illegal ivory trade flows. These nine are now required to submit action plans to improve their implementation of CITES ivory trade requirements. This obligation was directed at China and Thailand as end-use markets, Malaysia, Philippines, Hong Kong and Viet Nam as transit countries/territories, and Kenya, Tanzania and Uganda as ivory source, transit or exit points in Africa.

“Everyone should be clear that the pulverisation of seized ivory in no way removes the Philippines’ obligation under CITES to submit ivory action plans, which in the interests of transparency should have their non-sensitive details made public,” said O Criodain.

Dr Chris Shepherd, Acting Director for TRAFFIC’s South-east Asia Programme added: “It is heartening to see the Philippines’ authorities take the issue of ivory trade seriously—it sends a strong message to other countries in the region—notably Thailand, whose Prime Minister publicly committed the country to end their ivory trade, and Malaysia, who have also indicated their intention to destroy seized ivory stockpiles, that concerted international action is urgently needed.”

Worldwide, the political will to address the illegal trafficking of wildlife goods is gaining momentum. Earlier this week, leaders of the G8 countries meeting at Lough Erne, Northern Ireland, issued a communiqué noting their commitment to tackle the issue. Their statement reads: “We will also take action to tackle the illegal trafficking of protected or endangered wildlife species.”

Learn more about what WWF and TRAFFIC are doing to protect elephants, rhinos and tigers from poaching and illegal trade