Poachers kill over 11,000 elephants in Gabon 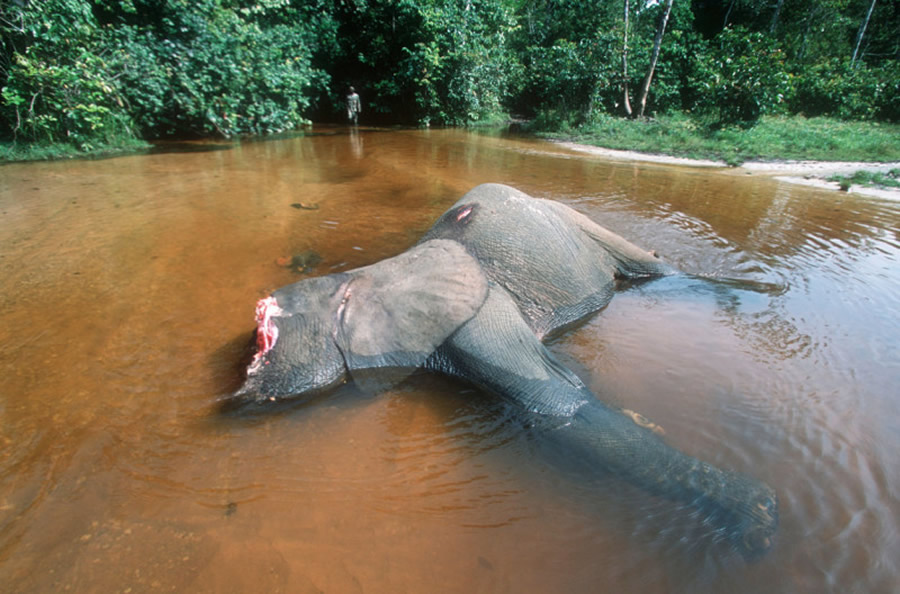 Poachers kill over 11,000 elephants in Gabon

A new study confirms what has been long suspected: elephant populations are being decimated to the point that the survival of the species in Central Africa is now in question.

According to a study by the Gabonese National Parks Agency, WWF and the Wildlife Conservation Society (WCS), poachers have killed an estimated 11,100 elephants – between 44 to 77 per cent of the population –in parts of Minkébé’s National Park and its surroundings in northern Gabon since 2004, when it held Africa’s largest forest elephant population.

“The situation is out of control. We are witnessing the systematic slaughter of the world’s largest land mammal,” said Bas Huijbregts, head of the Central African strand of WWF’s global campaign against illegal wildlife trade.

“Some reports lead the world to believe that the ivory war has moved from the Central Africa region to other parts of the continent. This is wrong. What has changed is that these criminals are now also attacking the better protected elephant herds in Eastern and Southern Africa.”

“But here in Central Africa, unnoticed to the world, elephants are losing this war at lightning speed.”

Fiona Maisels, a conservation scientist at WCS who has been analyzing the survey data, said that the data pointed to a regional crisis.

“The Minkébé data are representative of trends across all remaining forest elephant strongholds in the region, not to speak of the Democratic Republic of the Congo, which is believed to hold 7,000 to 10,000 elephants, or less than ten per cent of its population twenty years ago,”

Over in in the Central African Republic (CAR) – which in the mid 1980’s held up to 80,000 elephants – poachers are taking advantage of the political instability to wipe out the country’s remaining elephant, which can now number in the thousands.

Speaking from Bayanga in southwest CAR, Guian Zokoe, who is in charge of the Dzanga-Sangha Protected Areas for the CAR Ministry of Water and Forests, says poachers have killed at least 17 elephants around the Ngotto forest in the south of the country in the past few days. Unconfirmed reports by villagers hint that some sixty elephants were also killed further north, near the town of Yaloke, he said, adding there were reports of killings throughout the country.

“The Central African Republic’s new government has to send its armed forces to stop these poachers before they hit its last elephant stronghold, Dzanga-Sangha, a recently declared World Heritage Site.”

“It is not just a question of protecting CAR’s natural resources, but of stopping these armed groups from waltzing around the country and terrorizing local populations wherever they go,” Zokoe added.

How to end poaching

Although solutions to effectively address the poaching crisis in the region are varied, what can be concluded is clear: left unaddressed, Central Africa’s elephants will follow the footstep of their western black and northern white rhinoceroses, both hunted to extinction.

“Governments in the region such as Cameroon, Chad and Gabon are recruiting more rangers and send their armies to fight these poachers. But that is not enough,” Huijbregts says.

“The international intelligence community needs to get involved in this fight as soon as possible, in order to identify, track and put out of business these global criminal networks, which corrupt governments, erode national security and hamper economic development prospects.”

But Huijbregts explained that to effectively put an end to the poaching crisis, countries in in East Asia would need to address their exploding demand for ivory, which is resulting in record prices.

“Unless the governments of the region and demand countries treat this issue as an international emergency we cannot rule out that, in our lifetime, there will no longer be any viable elephant populations in Central Africa,” Huijbregts said.

Massive quantities of illegal African ivory are being laundered through Thai shops.

To save Africa’s elephants it is essential that Thailand closes this legal loophole. Join us in asking Thai Prime Minister Yingluck Shinawatra to ban all ivory trade in Thailand.