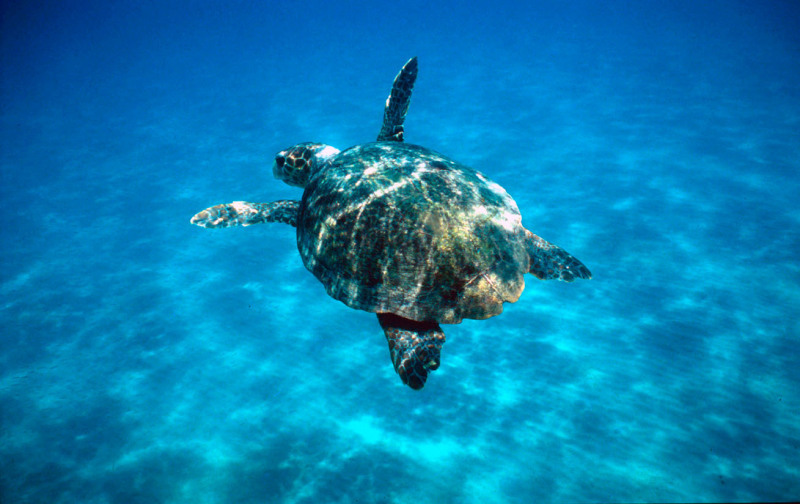 We don’t want your beach holiday or tuna sandwich to put turtles in danger.

You may never lay eyes on a marine turtle.

But we all share some responsibility for keeping them safe.

Our love of sand and sea means the beaches where turtles have nested for centuries are covered in sun-loungers, hotels and restaurants. Our appetite for tuna and other seafood means thousands of turtles are caught and killed in fishing gear.

We don’t want you to cancel your holiday or change your dinner plans. But we do want to give turtles a break.

From being illegally traded to being caught and killed in fishermen’s nets,  marine turtles – different species of which are found in seas from the tropics to the Arctic Circle – face a variety of threats to their survival.
Six of the seven species of marine turtle are considered endangered or critically endangered.

We’ve played a part in banning the international trade in turtles, protecting nesting beaches and reducing turtle deaths in fishing gear. But we must make even greater efforts to enforce the bans, protect habitats and improve fishing practices.

Throughout the world, from Turkey in the Mediterranean to the Guianas in South America, and from coastal east Africa to Australia and the Coral Triangle, we’re working with governments and coastal residents to create protected areas around feeding grounds and nesting beaches.

In the Guianas, since the 1970s, we’ve been helping protect some of the world’s most critical nesting sites for olive ridley, green and leatherback turtles.

We started in the 1970s with beach patrols and awareness campaigns. Since then, we’ve helped create protected areas where fishing is banned, and encouraged countries to work together to protect turtles. These efforts have led to encouraging increases in the numbers of some species of marine turtles – although the work is far from done.

More than 250,000 turtles are caught accidentally by fishing hooks every year – but it doesn’t have to be this way. We’re promoting turtle-friendly fishing gear like circle hooks, a style of hook that spares turtles.

In 2009, we helped convince the Philippines government to convert its entire longline fishing fleet to using circle hooks. This will save the lives of thousands of marine turtles every year.

We’re also tackling the illegal trade and over-exploitation of turtles for meat, eggs, shell, leather and curios. Turtle eggs are stolen to be eaten, turtle shells torn off to make handicrafts, and they’re hunted for their meat.
In Costa Rica, among other places, we’ve been working with the local communities to provide opportunities for former egg poachers to become community rangers. The level of illegal egg collecting has fallen dramatically.

Marine turtles’ sex is determined by the temperature of the sand in which they incubate. Cooler sands produce males, and warmer sands produce females. As beaches warm with climate change, more females will be born.

We’re pushing other countries to follow the Philippines’ lead and adopt turtle-friendly fishing gear such as circle hooks.

In the Coral Triangle we’re ramping up our work on illegal trade of marine turtles. We’re targeting both the sources of the turtles and the key trade hubs and markets in Southeast Asia and East Asia.

We’re also fighting to protect important marine turtle nesting sites, including 17 critical sites along Turkey’s Mediterranean coastline. With our partners, we’re working to predict how climate change may affect nesting beaches, and put in place action plans to address this.