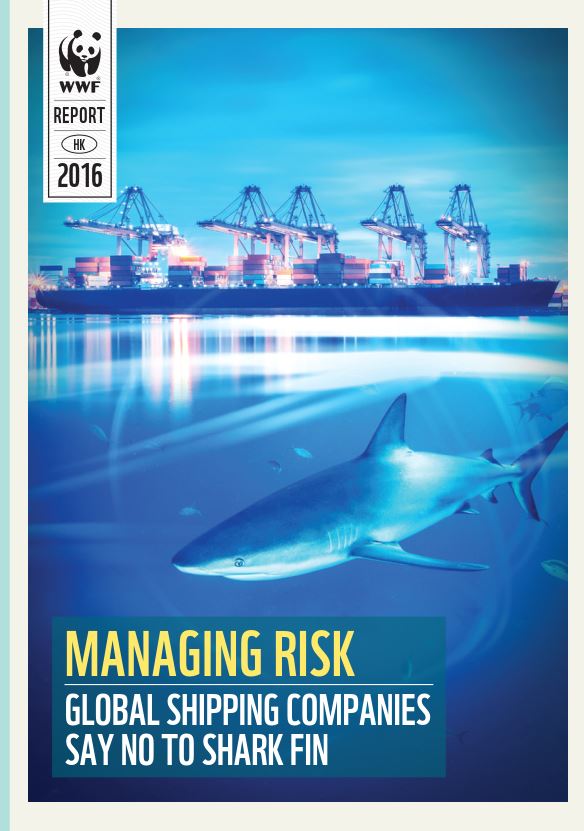 Today WWF-Hong Kong revealed the results of a study on shark fin cargo transported by ocean. A total of 16 of the top 20 global container/liner operators (“shipping companies”)[1] that WWF-Hong Kong approached between April 2015 and March 2016, together representing over 60 per cent of the market, have established policies prohibiting the carriage of shark fins*. A launch ceremony for the report, entitled “Managing Risk: Global Shipping Companies Say No to Shark Fin“, was held today. The guests included Christine Loh Kung-wai, OBE, JP, Hong Kong’s Under Secretary for the Environment; Tim Smith, Chief Representative of Maersk Group in North Asia and Chairman of Maersk China, the world’s largest shipping company; and representatives from WWF-Hong Kong.

Hong Kong accounts for about 50 per cent of the global shark fin trade. In 2015, 92 per cent of shark fin by volume were imported into Hong Kong by ocean[2]. “ For the sake of the world’s shark populations, we applaud shipping companies’ effort to stop trading shark fin. And we look forward to a future when Hong Kong can become Shark Fin free.” said C.W. Cheung Chi-wah, Senior Head of WWF-Hong Kong’s Climate and Footprint Programmes.

To better understand the role shipping companies play in the global shark fin supply chain, between mid-2014 and December 2015, WWF-Hong Kong deployed researchers in Sheung Wan on Hong Kong Island – where most shark fin traders and retailers are based, and the container terminal – to take notes of container information and identify the shipping companies involved in shark fin carriage. With this research, WWF-Hong Kong undertook an industry survey of the global top 20 shipping companies to identify the shipping industry’s role and understand their perspectives on the shark fin trade and shark conservation.  WWF-Hong Kong also undertook in-depth dialogues with those who are implementing the “no shark fin” carriage policy in order to understand the challenges and to recommend ways to effectively implement policies to help safeguard the shark population.

“Based on the 13 pieces of written feedback in our survey, 46 per cent of the respondents acknowledged that environmental concerns were their primary reason for establishing a “no shark fin” carriage policy,” explained Tracy Tsang Chui-chi, WWF-Hong Kong’s Senior Programme Officer, Shark. “Complex international regulations, illegal fishing and carriage of threatened shark species can all present significant reputational and legal risks for shipping companies. The consensus among the majority of the shipping companies is that a ban on shark fin carriage effectively mitigates these risks.”

Maersk, the operator with the largest share of the world’s liner fleet, was the first to place a total ban on shark fin cargo in 2010. “In all aspects of our operations, the Maersk Group always strives to run our businesses in a responsible way. We are committed to work collaboratively with all industry stakeholders to take practical steps to combat the illegal transport of wildlife products like sharks fin, and to raise awareness so that effective measures can be put in place to address the problem,” said Tim Smith, Chief Representative of Maersk Group in North Asia and Chairman of Maersk China.

“After setting up the policies, the next step is for shipping companies to effectively implement the policies, for example, through focusing on improvements in booking and screening systems to ensure that shippers do not try and circumvent this ban. By working together to implement appropriate carriage policies, we can contribute to a more sustainable future for the world’s sharks and help restore global marine ecosystems.” concluded Gavin Edwards, WWF-Hong Kong’s Conservation Director.

There were also 8 shipping companies which had established policies prohibiting the carriage of shark fin but had not yet announced these policies on website as of March 2016: Hanjin Shipping, Yang Ming, NYK Line, UASC, “K” Line, PIL (Pacific International Line) , ZIM and Wan Hai Lines.

Finally, there were two shipping companies which had not responded with details of their “no shark fin” carriage policies as of March 2016. However, records of recent shark fin shipments by both of these companies exist: COSCO Container Lines and CSCL (these two companies were merged into China COSCO Shipping Corporation Limited in Feb 2016).