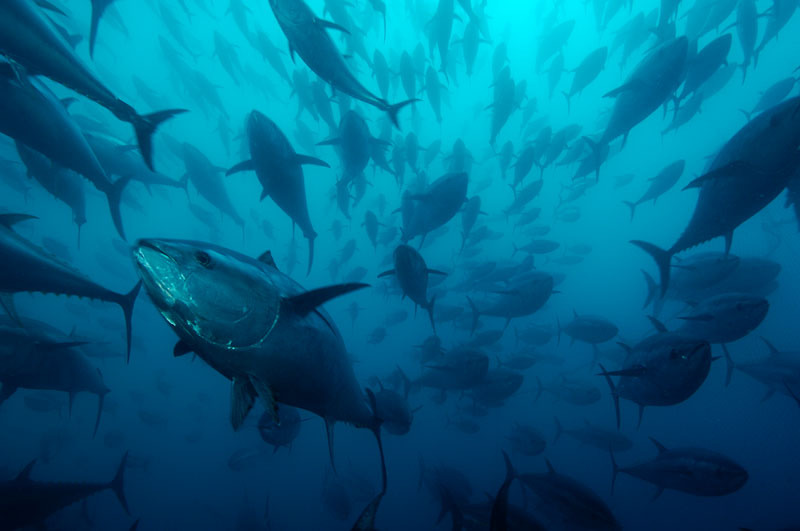 Because irresponsible fishing has steered us towards catastrophe…

Not as true as it once was. All over the world, fisheries are on the point of collapse. Not because we’re eating too much fish – but because the way we’ve caught them over the last few decades has been wasteful and short-sighted.

We need to fish responsibly so that we can continue to fish, maintaining jobs, communities and food security.

We need to fish smarter.

Once, it seemed as though our oceans could provide us with a never-ending supply of food. But illegal, unregulated and wasteful fishing has pushed them to the limit.

Overfishing has left many species, such as bluefin tuna, Atlantic cod and orange roughy, at dangerously low levels. Scientists recommend safe catch limits, but these are often ignored during the political negotiations that decide how much fish can be caught. Indiscriminate fishing practices mean fishers catch billions of fish and other creatures they don’t even want. This “bycatch” is often thrown back to sea dead or dying.

Some species have completely collapsed.  When the world famous Newfoundland cod fishery collapsed in the early 1990s, around 40,0000 people lost their jobs. Many other fisheries throughout the world are now also overfished or on the verge of collapse, leaving fishermen and communities that relied on them for income and food in poverty.

Changing the way we fish couldn’t be more urgent.

Our Smart Gear competition challenges the industry to design fishing equipment that’s less destructive. A new net design developed for this competition uses the reaction of fish caught in a net to allow juvenile cod to escape, while trapping haddock, the target fish. One United States fishery now mandates the use of this net design to reduce bycatch of juvenile cod.

Another innovation is the  circle hook, which reduces bycatch of critically endangered sea turtles. This hook that is more circular than normal J-shaped ones is being championed by WWF as its use dramatically reduces bycatch of marine turtles.

We’ve worked with our partners to promote these hooks to fishing communities. In Latin America, for example, over 600 vessels now use them. In 2009, the president of the Philippines committed the country’s tuna fishing fleet to using circle hooks. This will save around 1,500 turtles each year.

We’re also campaigning for a big reduction on Atlantic bluefin tuna fishing, at least until stocks – currently on the brink of commercial extinction – recover.

For other tuna fisheries, we helped set up the International Sustainable Seafood Foundation, which brings together 70% of the world’s canned tuna market to look for ways to make tuna fishing sustainable.

IUU (illegal, unreported, unregulated) fishing costs an estimated US$10-23 billion a year. IUU fishing is one of the biggest threats to fisheries’ sustainability.

We’re engaged on many fronts to make fishing smarter: