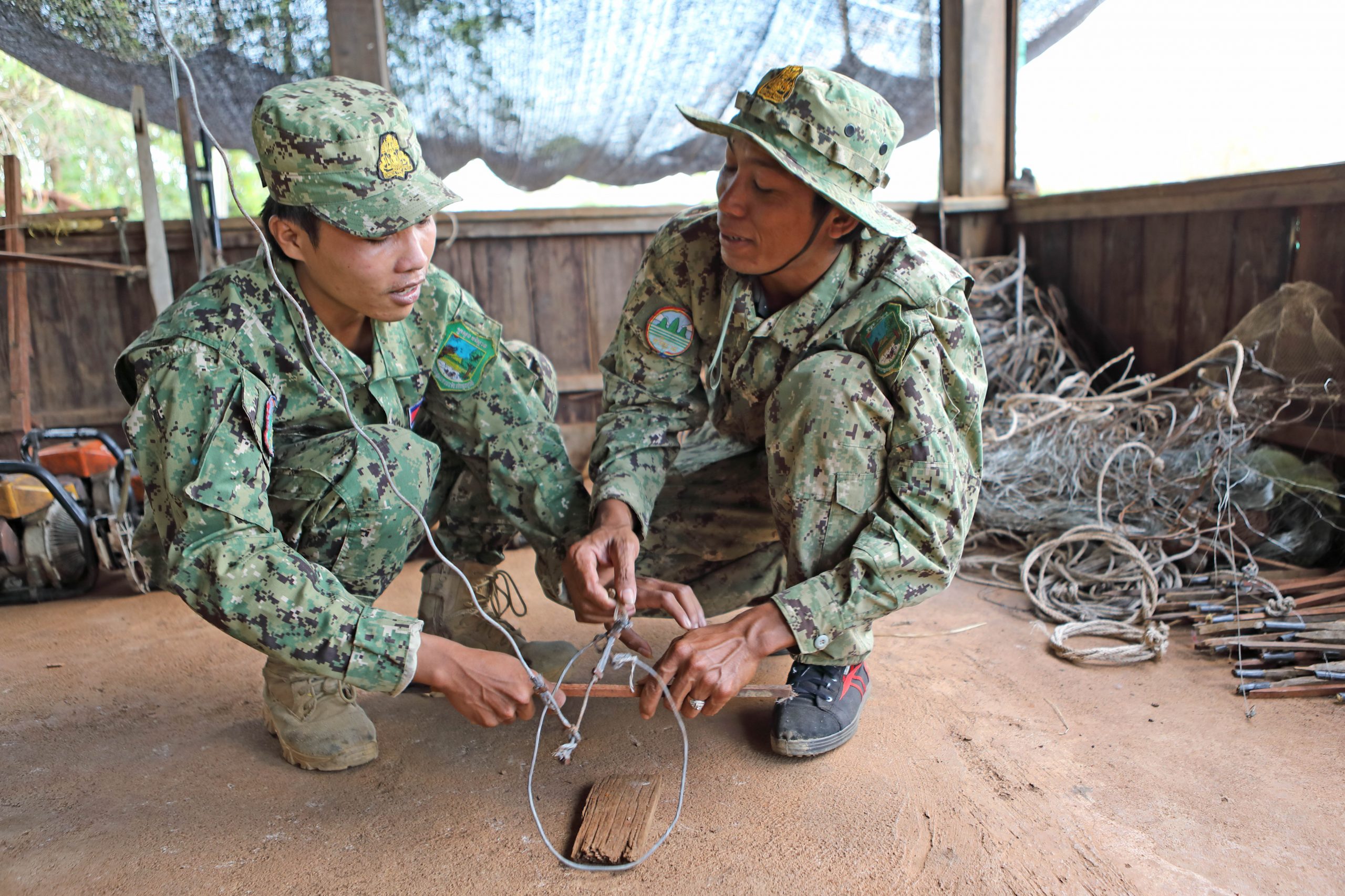 29 July 2017 – On Global Tiger Day today, WWF is urging tiger-range governments to strengthen anti-poaching efforts and crack down on a severe wildlife snaring crisis that is threatening wildlife across Asia, especially the world’s remaining wild tigers, which number only around 3,900.

Easy to make from widely available material such as bicycle cable wires and quick to set up, wire snares are deadly traps that are fast becoming the plague of Asia’s forests. Driven by the growing illegal wildlife trade, which is now reaching an estimated US$20 billion annually[1], poachers are increasingly using snares to trap wild tigers, elephants, leopards and other animals that are in high demand in the black market.

“Snares are dangerous, insidious and quickly becoming a major contributor to the wave of extinction that is spreading throughout Southeast Asia – and tigers are being swept up in this crisis. All efforts to recover wild tigers are now imperiled by snaring on a massive scale. We cannot over emphasize the need for strong government commitment and investment in rangers who are on the frontline of conservation, clearing snares and apprehending those who set them,” said Mike Baltzer, Leader of WWF Tigers Alive.

In the rare occasion that a wild tiger is able to escape a snare, it suffers debilitating injuries that prevent it from hunting, eventually causing it to die of starvation or infection. In addition, snares maim or kill any animal that activates them thus dealing a double blow to wild tigers, by trapping the prey base they need to survive and reproduce.

“It’s impossible to know how many snares are being set up every day, and threatening wildlife in these critical habitats. Hundreds of thousands of deadly snares are removed by rangers from Asia’s protected areas annually, but this is just the tip of the iceberg,” said Rohit Singh, wildlife law enforcement expert at WWF.

Within the Tropical Rainforest Heritage of Sumatra, a UNESCO World Heritage site and the only place on Earth where wild tigers, orangutans, elephants and rhinos are found in the same habitat, snare traps are estimated to have doubled between 2006 and 2014[2].

Yet, many of such critical habitats lack adequate resources for protection. In nearby Rimbang Baling, one of several protected areas in Sumatra, there are only two full-time government rangers out of a total of 26 mostly community-based rangers. Together, they patrol over 1,400 square kilometres, an area equivalent to nearly twice the size of New York City.

“Removing these silent traps is not enough. Rangers on the ground must be supported by greater resources and strong legislation to take action against illegal poachers with snares,” added Singh. “In addition, local communities must also be recognized and empowered as stakeholders in conservation. Protecting biodiversity is in the interest of both wildlife and people and communities can play a critical role in safeguarding vital ecosystems.”

In the Gunung Leuser National Park, which makes up just about a third of the entire World Heritage site in Sumatra, ecosystem services are valued at over US$ 600 million per year, while the park stores over 1.6 billion tons of carbon and provides water to four million people[3]. Local communities rely heavily on these critical resources to survive, making it an even stronger imperative to halt the snaring crisis, and help safeguard the livelihoods of local communities.

As snares tighten their grip across Asia, conservation organizations across the continent are calling for urgent action. For example, in Cambodia, conservation groups led by Wildlife Alliance are launching an awareness movement to educate the public on avoiding the consumption of wild meat, which further fuels the snaring crisis.

In 2010, tiger range governments committed to the most ambitious conservation goal set for a single species – TX2, or the global goal to double wild tigers by 2022. Since 2016, the long trend of decline in global wild tiger numbers has halted for now and may even begin to rise, signaling a beacon of hope for global tiger conservation. Without urgent efforts to strengthen anti-poaching and reinforce investments in rangers, the poaching crisis will turn the trend back towards decline.


About WWF
WWF is one of the world’s largest and most respected independent conservation organizations, with over 5 million supporters and a global network active in over 100 countries.  WWF’s mission is to stop the degradation of the earth’s natural environment and to build a future in which humans live in harmony with nature, by conserving the world’s biological diversity, ensuring that the use of renewable natural resources is sustainable, and promoting the reduction of pollution and wasteful consumption. Visit panda.org/news for latest news and media resources.