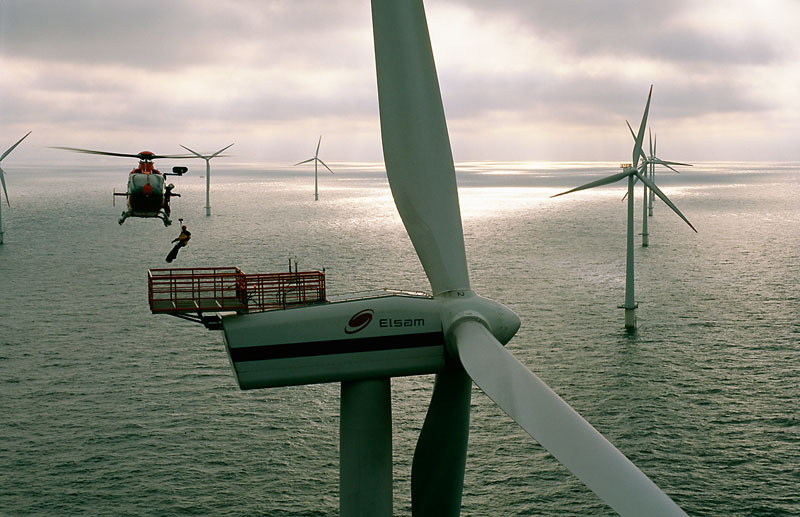 We’re showing the way forward to a sustainable energy future.

Turn off the light when you leave the room. Take the bus instead of the car. Buy an energy-efficient washing machine. Don’t leave your appliances on stand-by.

Simple steps we can all take when we use electricity.

Build new green homes and refit existing ones. Generate renewable energy on a massive scale. Overhaul our transport system. Supply the hundreds of millions of people who don’t have access to electricity with clean energy.

Rather more complex. But vital if we want to fend off catastrophic climate change.

We all need to start using less and better energy – and soon.

Generating energy is the biggest contributor to greenhouse gas emissions, which cause climate change.

If we carry on burning fossil fuels like oil and coal at the rate we do today, climate change is likely to spiral out of control. From flooding to food shortages, the ensuing environmental disaster would affect every single one of us.

Humanity’s use of fossil fuels must start going down within the next five years to stop temperatures rising above the point of no return.

But climate change isn’t the only reason we need to change our energy habits. Our oil reserves won’t last for ever. Increasingly, energy companies are looking to remote places like the Arctic and tropical rainforests for untapped resources. They’re also turning to highly polluting unconventional fossil fuels, like tar sand. The environmental consequences will be severe – and we can expect more disastrous oil spills too.

Increasing demand for finite supplies of fossil fuels is likely to increase political instability. Nuclear power is also a dangerous option in an unstable world – quite apart from the continuing problem of radioactive waste.

A sustainable energy future is the only future.

Energy-efficient appliances often use half the energy of standard products. Just think how much energy we could save if we all switched to them.

With that in mind, we helped launch Topten, which gives people tips on the most energy-efficient products on the market.

Topten is supported by the European Commission and is available throughout Europe. It’s now expanding into the United States, India and China – reaching hundreds of millions of people, who use two-thirds of the world’s electricity.

But individual choices alone aren’t enough. Governments and businesses need to make major changes if we’re to use energy more efficiently, and we’ve campaigned to make that happen.

In the UK, for example, we helped persuade the government to introduce legislation that requires all new homes to be zero-carbon from 2016. Houses are responsible for more than a quarter of the UK’s CO2 emissions, so this will make a dramatic difference.

We campaigned for the European Union to adopt a target of generating 20% of energy from renewable sources by 2020. We’ve encouraged energy efficiency and renewable energy from the Mediterranean to the Philippines.

We’re also working with some of the world’s leading companies to encourage them to reduce their energy consumption and use renewable energy.

Because cement production worldwide contributes 5 per cent of global carbon dioxide emissions, WWF and Lafarge, the world’s largest producer, have partnered together since 2000 to reduce Lafarge’s emissions and promote energy efficiency. Lafarge is committed to major reductions and has taken leadership in the sector. Lafarge has since co-founded the Cement Sustainability Initiative which comprises 18 companies, representing 30 per cent of global production.

“Passive houses” need almost no energy for heating or cooling, thanks to airtight construction, insulation and heat pumps. Around 25,000 have been built so far in Europe.

The solution to preventing catastrophic climate change is to use energy more efficiently, and generate it from sustainable, renewable sources.

In 2011 we released The Energy Report: 100% Renewable Energy by 2050. The most ambitious analysis of the world’s energy needs yet attempted, it shows that our vision of a fully renewable energy supply for everyone is practically possible. We already have the technology to do it, and it will actually save the world money in the long run.

But governments, industry and investors will have to make some brave decisions to support energy efficiency, renewable energy and better electricity grids. All of us are going to need to make some changes to our lifestyle – from eating less meat to thinking about how we travel. And the scenario presented in the report raises some tough conservation questions too, particularly around the possible future role of biofuels.

It isn’t going to be easy. But from influencing governments to working with manufacturers in China to introducing solar cookers and energy-efficient stoves in rural communities in developing countries, we’re moving the debate forward and offering practical solutions.