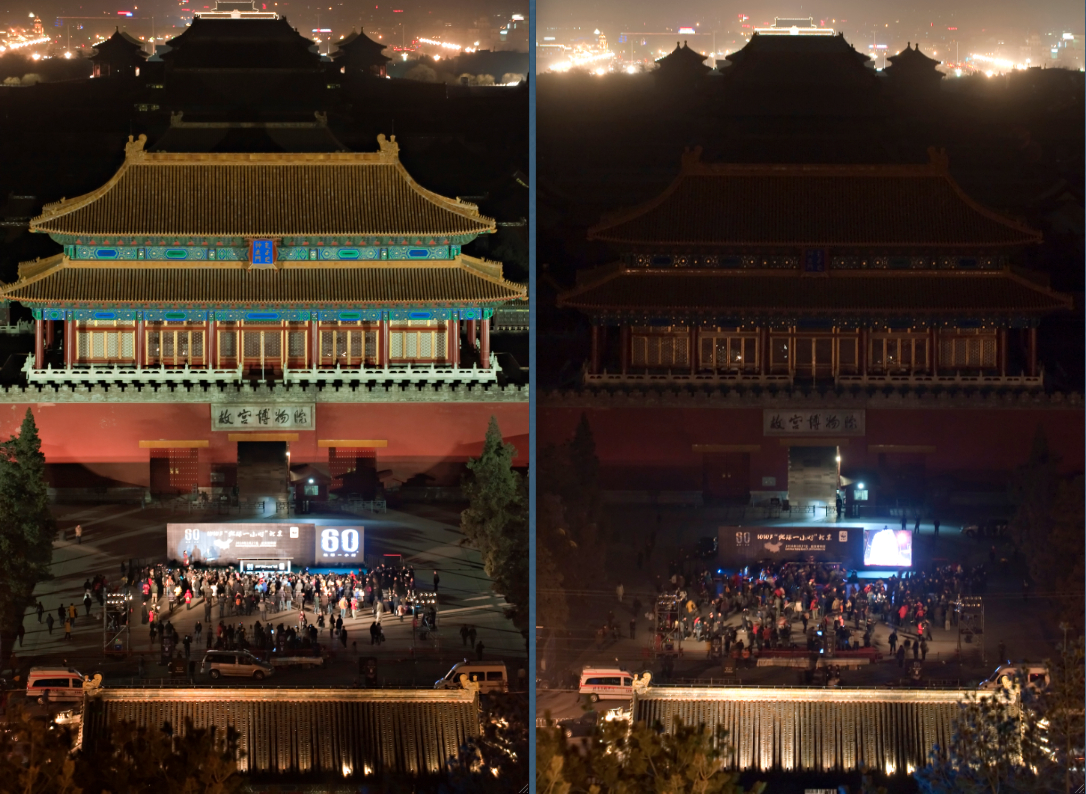 China has shown today that it is ready for transformation and a shift into a greener future.
Symbolizing the drive towards a low-carbon economy, 34 Chinese cities, including Beijing, Shanghai, Chengdu and Dalian took part in the global Earth Hour event.

Along with the rest of the continent China sent a clear signal that it is not only willing to help tackle climate change but it also wants to lead the process.

The main event took place in the 600-year old Forbidden City with the China Office Representative Dermot O’Gorman, Chinese actress Li Bingbing and WWF International Director General Jim Leape participating in the lights switch off that made the historic place go dark for an hour.

“Tonight, hundreds of millions of people are raising their voices by turning out their lights. It is a simple act, but a powerful call to action,” Jim Leape said.

“The citizens of Beijing were among hundreds of millions of people who signalled their concern about climate change. Chinese people not only know and feel the threats of climate change but they also want to see action to tackle the problem.”

China overtook the United States as the world top greenhouse gas emitter.. but it has taken clear action to tackle the problem. Recently it emerged that China had topped the US and other G-20 members in 2009 clean energy investments and finance.

By 2020, the country will obtain 15 percent of its primary energy from renewable sources. And with development running ahead of schedule, that figure could be closer to 20 percent.

Mei Lan – China’s recently returned panda is this year’s Earth Hour Global Ambassador. Along with 13 million residents of her home town Chengdu, Mei Lan has also taken part in 2010 Earth Hour.
“China has incentive to act on climate change and it already does so. Earth Hour is yet another example of it,” Mr Leape said.

Elsewhere in Asia the enthusiasm for Earth Hour was equally great.

Philippines once again topped the charts when it comes to city and town participation with 1044 towns, cities and municipalities rallying behind the event. Phillippines have also become masters of the Earth Hour FlashMob dance.

Over 100 eager, energized volunteers showed up to dance practicing through heat and the occasional drizzle paid off in spectacular performances. When the first dancer started waving an Earth Hour flag – people stopped to take notice.

The dances culminated in a gigantic number 60 formation, signalling the 60 minutes of the Earth Hour. Encouraged to get involved in different ways, including eco-outdoor evening parties, hunting for recyclables and switching off TV sets an estimated an 15 million Filipinos participated in this year’s Earth Hour.


A spokesperson for President Arroyo said she had once led the government’s campaigns for energy conservation and “it is crucial for the public to adopt energy efficient practices, especially since the country is experiencing a series of power shortages, brought about by the El Niño

The Quezon memorial, located in the old Filipino capital of the same name, and a symbol that represents the three major regions of the country, switched off as well on Saturday night, in a symbol of unity of purpose in calling for action on climate change.

In Japan the Tokyo Towers and the Hiroshima Peace Memorial went dark at 0830pm while in Nepal, local Committees and authorities organized a programme there where students and locals came together for a candlelight vigil by the Bouddhanath Stupa, one of the most famous and revered stupas.

In India across the country, Earth Hour has reached out to schools through at least 20 WWF state offices which are directly engaging with schools through which an estimated a 100 000 youth have been introduced to the global call for action.

Delhi, Mumbai and Bangalore were the official Earth Hour cities this year.

The main event was held at the India Gate- which also dimmed its lights in support of Earth Hour..

The Indonesian Tugu Jogja was built around one year after the construction of Yogyakarta Kingdom. At the early time of its construction, it clearly described the philosophy of the unity of God’s creatures that means the spirit of togetherness of lay people and authorities to fight colonials.

Tonight, according to the Javanese term, the spirit of togetherness the lights went off at the Tugu Jogja.

The main focus of Thailand’s Earth Hour took place around the Wat Phrathat Doi Suthep temple, a short distance outside of the city of Chiang Mai in the northwest of the country, and a holy site for many Thai people. Located on the Doi Suthep mountain, it was possible to watch the city switch off, seeking to reduce its power consumption and spread a message across the country and the world for concerted action on climate action

“The message of Earth Hour is simple”

In addition to turning off the lights of all cities’ public buildings, Seoul City designated some of landmark buildings and icons to switch off, and distribute about 30,000 Earth Hour posters in public notice boards.

“The message of Earth Hour is simple,” said South Korea’s best known international citizen, UN Secretary General Ban Ki Moon. “Climate change is a concern for each of us. Solutions are within our grasp and are ready to be implemented by individuals, communities, businesses and governments around the globe.
“Earth Hour is both a warning and a beacon of hope. By switching off non-essential lights for an hour, people will join a symbolic display that can inspire the change we so urgently need.

“As we watch the lights go out from continent to continent, let us reflect on the fragility and importance of our natural heritage and pledge to protect it for a sustainable future for all.”

In Brunei participation has been encouraged from a young age, and been very impressive, with campaigning being undertaken in every school in the country, in partnership with the Science, Technology and Environment Partnership (STEP) centre, who have set up energy clubs in many of the country’s schools.

In addition, one of the great symbols of the Sultanate, and one which dominates the skyline of the capital city of Bandar Seri Begawan, and one of the most impressive Mosques in all of Asia, the Sultan Omar Ali Saiffudin Mosque, will switch off its lights, along with a number of other government buildings and businesses.