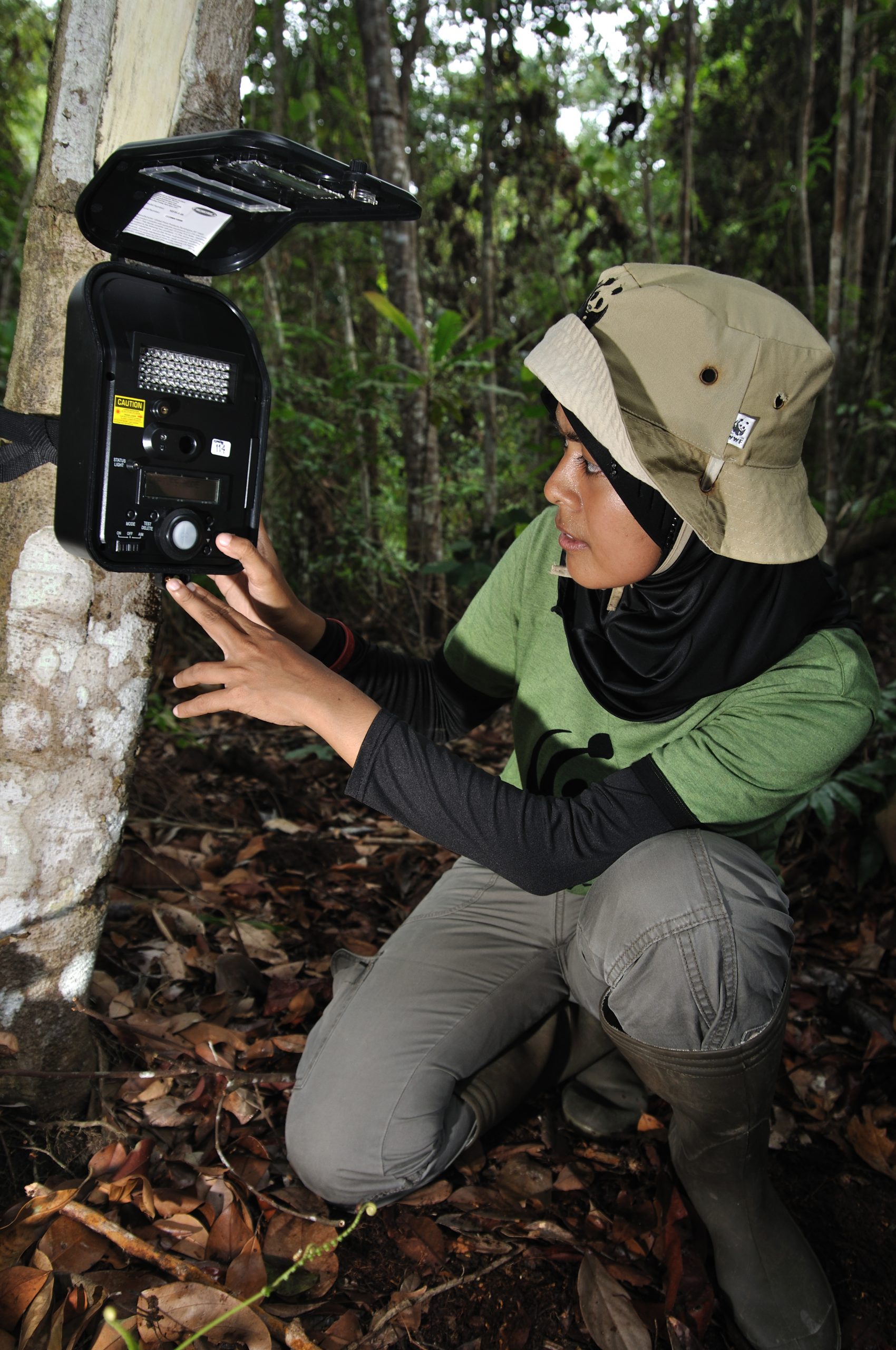 Jakarta, Indonesia – Camera traps deep in the Sumatran jungle have captured first-time images of a rare female tiger and her cubs, giving researchers unique insight into the elusive tiger’s behaviour.

After a month in operation, specially designed video cameras installed by WWF-Indonesia’s researchers seeking to record tigers in the Sumatran jungle caught the mother tiger and her cubs on film as they stopped to sniff and check out the camera trap.

There are as few as 400 Sumatran tigers left in the wild and they are under relentless pressure from poaching and clearing of their habitat. After five years of studying tigers using wildlife-activated camera traps set up in the forest, these are the first images of a tiger with offspring.

“We are very concerned though, because the territory of this tigress and its cubs is being rapidly cleared by two global paper companies, palm oil plantations, encroachers, and illegal loggers. Will the cubs survive to adulthood in this environment?” said Karmila Parakkasi, the leader of WWF-Indonesia’s Sumatran tiger research team.

The discovery comes as WWF prepares to launch a campaign on 14 Feb. 2010, to coincide with the start of the Year of the Tiger in the Chinese calendar.

The year-long, Tx2: Double or Nothing campaign aims to raise the bar for tiger conservation by securing high-level political commitment at a Heads of State Tiger Summit in September in Vladivostok, Russia to be hosted by Prime Minister Vladimir Putin, and supported by WWF and other partners of the Global Tiger Initiative, including the World Bank.

“We want to change the course of tiger conservation,” said Mike Baltzer, leader of WWF’s global Tiger Initiative. “It’s not just about saving the tiger from extinction, but about doubling their number by 2022.”

With wild tiger numbers as low as 3,200, and a systematic attempt underway to wipe them out of the forests in Asia, more must be done to ensure this charismatic species and flagship for Asia’s biological diversity, culture and economy is not lost forever.

In addition to the tigress and cubs’ footage, the video camera also captured images of a male Sumatran tiger and its prey, wild boar and deer, as well as many other species such as tapirs, macaques, porcupines and civets.

Infrared-triggered camera traps, which are activated upon sensing body heat in their path, have become an important tool to identify which areas of the forest are used by tigers, and to identify individual animals to monitor the population. WWF has operated dozens of cameras throughout the central Sumatran province of Riau.

Parakkasi and her team first captured still images of the tigress and its cub in July 2009 through still camera traps. The photos were, however, not very clear.

“We were not so sure how many cubs there were,” she said.

Video camera traps were then installed in September at the same location to clarify the initial findings.

WWF’s tiger research team set up four of the video camera traps in known tiger routes in a forested “wildlife corridor” that allows animals to move between two protected areas in central Sumatra – Rimbang Baling Wildlife Reserve in Riau and Bukit Tigapuluh National Park in both Riau and Jambi provinces.

“When these cubs are old enough to leave their mother, which will be soon, they will have to find their own territory,” said Ian Kosasih, WWF-Indonesia’s Forest Programme Director. “Where will they go? As tiger habitat shrunk with so much of the surrounding area having been cleared, the tigers will have a very hard time avoiding encounters with people. That will then be very dangerous for everyone involved.”

“With this clear scientific evidence of tiger presence, WWF calls for formal establishment of the area between Rimbang Baling and Bukit Tigapuluh forests as a protected wildlife corridor,” Kosasih said.

WWF is also urging the paper companies operating in the area – Sinar Mas/APP and APRIL – as well as palm oil plantations to help protect all high conservation value forests under their control that are the habitat of tigers and other endangered species.