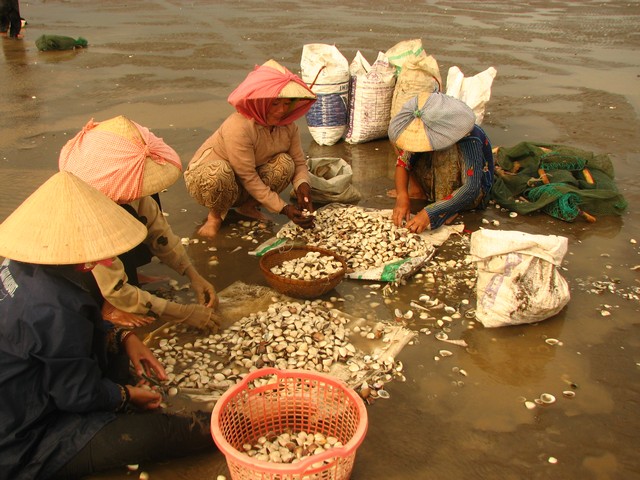 The nationally renowned Ben Tre hard clams (Meretrix lyrata) are hand picked using metal rakes and collected into mesh sacks. Once collected, the clams are sold to domestic markets and exported to Europe, the US, Japan, China and Taiwan.

The fishery is operated by a local cooperative that provides close management and surveillance of the broodstock and harvestable clams within their area. Support and advice are provided to the cooperative by the Ben Tre People’s Committee Department of Fisheries and the Ben Tre Department of Agriculture and Rural Development (DARD). Ben Tre DARD and WWF co-sponsored the MSC certification process.

“Although our clams are largely familiar to the EU market, we are still thinking of ways to better promote our business overseas,” said Tran Thi Thu Nga, Vice Director of Ben Tre DARD. “MSC certification gives us the right to promote our products with the credible MSC ecolabel to customers worldwide.”

“I congratulate the Ben Tre clam fishery on their MSC certification. This is an historic occasion – the first small-scale, community-based fishery in South East Asia to achieve MSC certification,” said MSC Chief Executive Rupert Howes. “I am also delighted to hear that certification is already bringing benefits to the communities who depend upon this sustainable resource and very much hope other Vietnamese fisheries will soon come forward into the third-party assessment process.”

In 1997, provincial authorities established the Rang Dong Fishery Cooperative, which is co-operated and managed by the fishing community. In 2007, the Cooperative’s profits reached 40 billion VND (approximately 2.2 million USD), greatly improving the income of its members. Already, ten additional clam cooperatives have now been established, forming an alliance of cooperatives that covers all clam areas in Ben Tre.

“It is our pleasure to contribute to the first MSC certification in Vietnam and in Southeast Asia,” said WWF’s Fisheries Officer Nguyen Thi Dieu Thuy. “One of our major tasks is to harmonize economic development with the maintenance of the natural environment. MSC certification of the Ben Tre clam fishery is such a success. Importantly, the Ben Tre fishery can now serve as a model sustainable fishery at both national and regional levels.”

“As the first MSC-certified fishery in Southeast Asia, the Ben Tre clam fishery will play a key role in demonstrating how certification can conserve resources, preserve local communities, and positively impact the bottom line for business – all at the same time,” said Meredith Lopuch, deputy director of the WWF-US Fisheries Program’s Major Buyer Initiative.

The government of Vietnam and the MSC signed a Memorandum of Understanding (MOU) in May 2005 declaring their joint commitment to encourage sustainable fishing in the country by promoting and facilitating MSC certification. The initial agreement was for three years and renewed in 2008.

The MSC recently announced the addition of a Risk Based Framework (RBF) to the MSC Fisheries Assessment Methodology (FAM). The RBF enables fisheries with limited data to undergo assessment to the MSC standard.

The Ben Tre clam fishery was one of the pilot fisheries involved in the testing of the RBF methodology, but was ultimately assessed using the conventional methodology in use at the time.