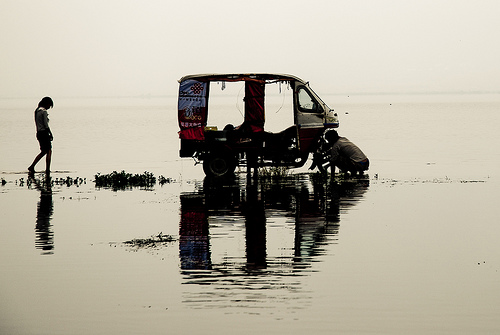 Hong Kong – Dhaka, Manila and Jakarta are topping a WWF ranking of the climate vulnerability of 11 major cities in Asia.

As Heads of States gather in Singapore for the APEC summit, WWF says that developed and developing countries must cooperate to prepare these cities for a brutal climate future, highlighting that their vulnerability is yet another compelling reason for a fair, ambitious and binding deal at the Copenhagen Climate Summit in December.

According to Mega-Stress For Mega-Cities, many of the cities analyzed are extremely exposed to threats such as storms and flooding, while huge numbers of people and assets at stake result in worrying levels of socio-economic sensitivity. At the same time, the cities often lack capacity to protect themselves from devastating impacts.

“Climate change is already shattering cities across developing Asia and will be even more brutal in the future”, said Kim Carstensen, Leader of the WWF Global Climate Initiative. “These cities are vulnerable and need urgent help to adapt, in order to protect the lives of millions of citizens, a massive amount of assets, and their large contributions to the national GDP.”

“The APEC summit this week in Singapore provides an opportunity to exploit the true win-win potential offered by low carbon growth strategies for countries in the Asia Pacific region, with benefits for both the economy and the climate.”

The WWF report covers 11 urban centers across Asia, all located in coastal areas or river deltas. Following Dhaka (9 out of 10 possible vulnerability points), other cities at high risk are Manila and Jakarta (8 each), Calcutta and Phnom Penh (7 each), Ho Chi Minh City and Shanghai (6 each), Bangkok (5), and Kuala Lumpur, Hong Kong and Singapore (4 each).

“Asia is urbanizing rapidly, and we can be certain that urban areas will be crucial battlegrounds in the fight against climate change”, said Carstensen.

“Cities are responsible for most of the world’s energy consumption and greenhouse gas emissions, but they are also pioneers when it comes to developing innovative solutions. We can’t afford to surrender them to climate change. Instead, we must empower them to become change agents and protect both rural and urban areas from devastating impacts.”

“Leaders in hotspots of danger like Dhaka, Manila or Jakarta need urgent support from their counterparts in the industrialized world. Effective near-term and long-term adaptation will depend on financial support, technology cooperation, and capacity building”, said Carstensen.

According to WWF, this week’s APEC summit in Singapore provides leaders from developed and developing countries around the Pacific with a great opportunity to boost cooperation on adaptation to climate impacts as well as low carbon economic growth.

“Now we are only a couple of weeks away from the Copenhagen Climate Summit, but so far leaders have failed to clear the way for success next month in Denmark”, said Carstensen.

“APEC is the last chance before Copenhagen for leaders from a number of key countries to show that they really want to protect the planet from climate change.”