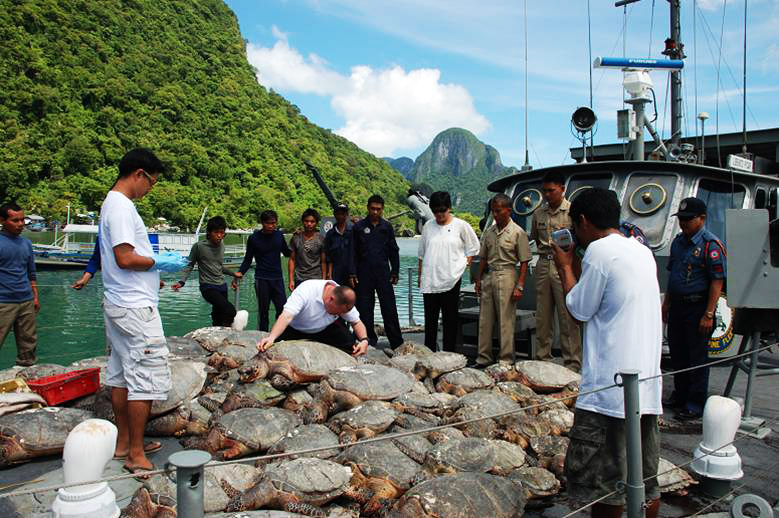 Two years after their arrests, 13 Vietnamese poachers caught with the corpses of 101 endangered hawksbill turtles (Eretmochelys imbricata) near El Nido, northern Palawan, in the Philippines, have been sentenced to jail time and fines.

On June 22, Puerto Princesa’s Regional Trial Court, Branch 50, ruled that the poachers should face jail time ranging from six to 18 months, and fines in connection with the incident.

Since the poachers have been in jail since Sept. 2 2008, the court also ruled that they now will only pay the fines.

The Vietnamese boat carrying the poachers was apprehended by two Filipino gunboats five miles east of Cabaluan Island near El Nido on Aug. 29, 2008. The 13-man crew attempted to scuttle the craft by flooding the holds, which was prevented by law enforcement officers. Found drowned in the vessel’s cargo holds were 101 Hawksbill Turtles, classified by the International Union for Conservation of Nature (IUCN) as critically-endangered – the highest risk rating for a living animal.

Under Philippine and international law, it is illegal to capture and kill sea turtles and to trade in sea turtle by-products.

The presence of sea turtles preserves the sea’s natural processes. Green Sea Turtles, continually browse on sea grass, which then is naturally pruned to grow denser, allowing the plants to spread more rapidly on the sea floor. Thousands of species of fish and invertebrates seek shelter within these submerged meadows, which also serve to store excess atmospheric carbon dioxide to slow down global warming. In addition, Hawksbill Turtles eat stinging jellyfish, preventing climate-induced blooms which would negatively affect tourism.

WWF-Philippines Palawan Project Manager RJ dela Calzada, who also serves as an Auxiliary Commander for the Philippine Coast Guard, said: “Let this serve as a precedent for future cases, and as a strong warning to all those who continue to encroach upon Philippine waters to plunder our dwindling marine resources.” WWF also congratulated the Armed Forces of the Philippines, the Local Government of El Nido and the Palawan Council for Sustainable Development for overseeing the case.

In the last decade more than a thousand foreigners have been arrested and charged for poaching in the waters of Palawan. Sentences historically have been rare, under fear of damaging international relations with neighboring countries.

Other incidents included: In September 2007, 126 endangered green sea turtles (Chelonia mydas) and 10,000 turtle eggs were found aboard Chinese fishing vessel F/V 01087 in Sulu. In April 2008, a 23-man Vietnamese poaching detail aboard the M/V Quang Mei was arrested in Balabac, Southern Palawan. Retrieved from the craft were assorted fish and a sea turtle. In July 2008, four Vietnamese aboard F/V Q.ng 95986 were arrested for alleged poaching off Guntao Isle, El Nido. Four other fishing boats, believed to be Vietnamese, escaped.

In April 2009, seven Chinese poachers aboard an unmarked speedboat were arrested near Cauayan Isle in El Nido. Thirteen dead and one still-living green sea turtle greeted authorities. It was quickly tagged and released.

Says WWF-Philippines Vice-Chair and CEO Lory Tan: “This is a good example of enforcement meted out to a logical and just end. Laws are enacted to create that level playing field designed to protect the public and serve the greater good. There can be no exceptions. Whether Vietnamese, Chinese or Filipino – environmental criminals must be held fully accountable for destroying the legacy we all hope to leave behind for future generations.”