For a living planet: a bottom line that counts 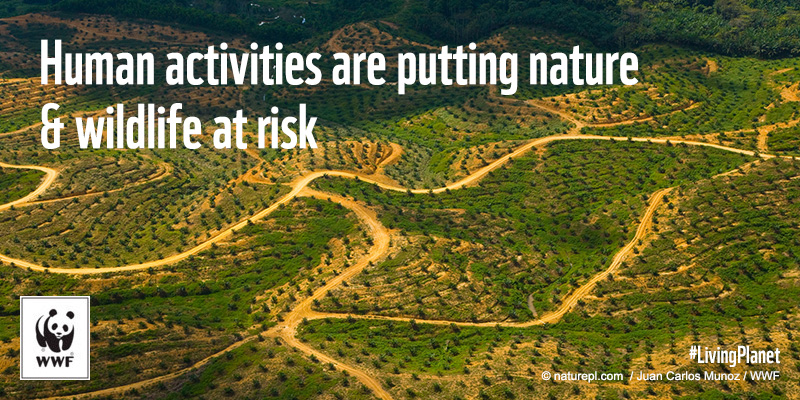 For a living planet: a bottom line that counts

2016 has been a year of historic strides for the planet.  The Paris Agreement entered into force in early November, a month before its first anniversary and four years earlier than expected and investment in renewable energy has now surpassed fossil fuels.

On biodiversity, there has been exciting news as well with wild tiger populations starting to make a comeback in India, Bhutan, far east Russia and China,  and several years of zero rhino poaching being marked in Nepal. The giant panda – icon of the conservation movement – moved one step away from extinction and the most trafficked species in the world, such as pangolins and African Grey Parrots, recently received greater protections against illegal wildlife trade.

While these developments demonstrate excellent progress, let’s keep the champagne on ice for now.

The undeniable truth is that we also continue to do great damage to the planet. For all the progress it has seen, 2016 is also set to be the hottest year on record. The terrifying effects of global warming are today before our eyes: Arctic ice is melting at an unpredicted and accelerated pace and the world’s coral reefs have suffered the worst ever bleaching crisis. In less than a generation, we have seen a nearly 60 per cent decline in wildlife across land, sea and freshwater. If this trend persists, global wildlife abundance could drop a shocking two-thirds by 2020 – that’s a span of only fifty years. And in the same fifty years, we have also seen an exponential acceleration of the unsustainable and wasteful use of natural resources.

While progress on policy and in the field is promising, the science is glaringly clear: human activities are pushing the planet and its natural systems to the edge. The way we produce and consume food, and how we power our lives, are causing human beings to overpower the planet for the first time in Earth’s history.

This story of natural decline is not just about the wildlife that so many of us love. As biodiversity decreases, we are weakening nature’s ability to provide the vital services we require—clean water, fresh air, food, a stable climate and much more.

These services, together with other natural resources, are vital for society and also for our current economic system.
Yet, at current rates, we are fundamentally undermining the earth’s ability to provide us with the resources we need. The warning signs are already there. Rampant overfishing has resulted in 90 per cent of the world’s fishing grounds being overfished or fully-exploited and worsening pollution is putting people’s health at risk.

A planet being pushed to the edge will eventually turn on us. In Asia, and other parts of the world, we are already seeing an increase in the frequency and intensity of tropical storms, typhoons and other extreme weather events disrupting lives and livelihoods across the region. Recent droughts in Africa are killing wildlife and bringing subsistence farmers and rural communities to their knees. Given the inevitable impact on the agriculture sector and commodities, even larger companies with global supply chains will start experiencing greater inherent vulnerabilities. Climate instability, extreme weather events and water scarcity feature at the top of the World Economic Forum’s list of risks for businesses.

As the planet finds itself at a crossroads, the challenge for governments and businesses is to balance ecologically sustainable development with economic growth. It is time to reset traditional perceptions about development and bring the world into a new era of growth driven by an inter-generational vision, powered by renewables and focused on producing and consuming sustainably. A model based on an integrated agenda where economic and social development are supported by environmental stewardship. This is what the world finally agreed when we adopted the Sustainable Development Goals last year. The equation is a simple one: we will not build a stable, prosperous and equitable future for humanity on a degraded planet. Particularly when in three decades the Earth’s population will be close to 10 billion.

For companies in Asia, a powerhouse for global demand, supply and finance, the risks and the opportunities are significant. Businesses in Asia can lead the way toward a long-term comprehensive approach that values natural capital and helps avoid the cost implications of resource scarcity and environmental damage such as floods, storms and drought. A good example would be the palm oil plantations.

Every year, illegal forest clearing practices cause devastating fires and haze that make headlines around the world and impact the lives and welfare of millions across Southeast Asia. By coming together to transform the way palm oil plantations are created and maintained in the region, which accounts for 85 per cent of global production, businesses in Asia can chart a new sustainable way forward for companies, brands and consumers everywhere.
This is not just about corporate social responsibility or activism. Sustainability makes good business sense. Studies have shown that companies with more sustainable practices also have better operational performance, higher yields and avoid social and environmental risks. By acting now, companies can ensure that their business models contribute towards the conservation of natural capital and a 1.5 degree world, which also translates into greater risk resilience and financial viability.

The plethora of commitments from governments, businesses and society, along with increased awareness give us hope that together, we can redefine our relationship with our planet, from a wasteful, unsustainable and predatory one, to one which benefits both nature and people. The momentum is building and businesses must be at the forefront of change.

The speed and scale of our transition to a sustainable society is essential if we are going to decouple economic development from environmental degradation. The accomplishments of the past year remind us of what can be achieved. The transition we need presents a daunting task, but also a marvelous opportunity to address perhaps the most existential of all challenges – the ability to live in harmony with nature. There is no time to waste and that is the bottom line.

This article appeared in the Business Times here.