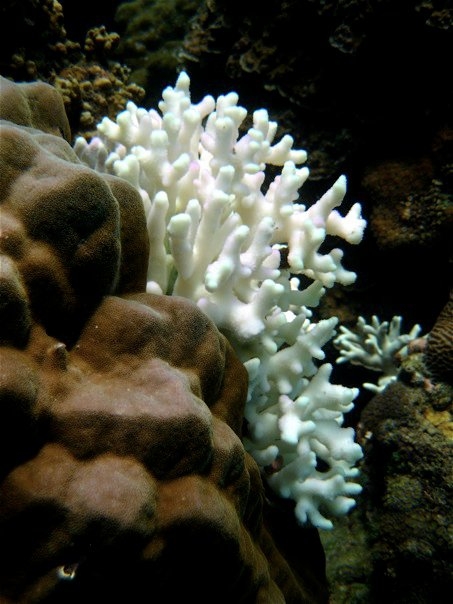 Mass coral bleaching caused by global warming is threatening the health of the Coral Triangle, a vast marine region that is home to 76% of all known corals in the world.

The Malaysian government recently closed portions of world-renowned dive sties on the tropical islands of Tioman and Redang, saying they would be off limits until October to give the fragile coral reef ecosystems time to heal.

Meanwhile, in the Philippines, bleaching has been reported in Anilao and Nasugbu, as well as off the cost of the western municipality of Taytay, Palawan. The latter saw corals, which usually exhibit a green and brown hue, temporarily turn unusual shades of pink, orange and yellow—a precursor to complete bleaching.

Numerous other Philippine reefs are likely to have been affected as well, exacerbated by localized outbreaks of Crown-of-Thorns Seastars.

“This widespread bleaching is alarming because it directly affects the health of our oceans and their ability to nurture fish stocks and other marine resources on which millions of people depend for food and income” says Richard Leck, Climate Change Strategy Leader of the WWF Coral Triangle Programme.

Coral bleaching is a phenomenon caused by global warming. Increased seawater temperatures, which in some regions have grown as much as 2°C above the long-term average maximum, can push the algae living inside corals beyond the brink, causing reefs to eventually turn white and die.

Aside from increased sea temperatures, other causes of stress include disease, pollution, sedimentation, cyanide fishing, changes in salinity, and storms.

The Coral Triangle region covers the seas of Indonesia, Malaysia, Papua New Guinea, the Philippines, Solomon Islands and Timor Leste. This nursery of the seas contains more than 600 species of reef-building coral.

Since March this year, about 50 different organizations and individuals have reported signs of coral bleaching in the Coral Triangle region. Up to 100% bleaching on susceptible coral species have been reported, and in some areas, severe bleaching has also affected the more resistant species.

The National Oceanic and Atmospheric Administration’s (NOAA) Coral Reef Watch stated that the current incident is the worst of it kind since 1997-1998, which decimated 16% of the world’s coral reefs.

With many areas showing signs of mass bleaching, it has become apparent that more weight needs to be put behind long-term conservation strategies, such as marine protected area management, preventing coastal and marine pollution, as well as promoting sustainable fisheries.

Better fisheries management is also key to alleviating the impacts of coral bleaching, ensuring that only viable sites are given access to fishing and that the more sensitive ones are given time to recuperate via strong regulations, enforcement and awareness.

In Malaysia, for instance, WWF is promoting the conservation of herbivorous reef fish, which plays a critical role of keeping algae populations lower, allowing room for coral recruits to settle on the potentially newly-dead coral skeletons..

Only a year ago, WWF launched The Coral Triangle and Climate Change: Ecosystems, People and Societies at Risk, a report based on a thorough consideration of the climate biology, economics and social characteristics of the region, showing how unchecked climate change will ultimately undermine and destroy ecosystems and livelihoods in the Coral Triangle.

How do corals lose their colour?