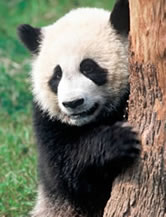 The 8.0 magnitude earthquake that struck Wenchuan County, Sichuan Province on May 12 has left severe impacts upon nearly 20 panda reserves in Minshan Landscape, where neighbouring communities have been directly affected as well, the local forestry administrations and WWF have learned.

According to the latest information, office buildings and equipments in Sichuan Tangjiahe Nature Reserve and its logistics base in Qiaozhuang were seriously damaged. The public equipments and facilities in Gansu Boyuhe Nature Reserve were gravely wrecked, where water supply and road infrastructure were interrupted by the quake. The Qingmuchuan and Motianling nature reserves in Shaanxi Province were also seriously affected with office buildings torn down and roads, power supply destroyed.

The normal life of the neighbouring communities has become increasingly difficult. For example, most farmers close to Baodinggou Nature Reserve in Mao County have to live under scratch plastic shelters as 80 per cent of the houses had collapsed. The blocked road has worsened the food scarcity and farmers had to find food from the debris temporarily.

WWF runs 110 projects in nature reserves and local communities in Minshan Landscape where 86 projects have been affected and halted. The two Chinese WWF volunteers who were working on project sites near the epicentre have been evacuated back to Chengdu after being trapped in Mao County for seven days.

WWF’s programme offices in Chengdu and Xi’an have enacted efficient emergency responses to work with partners and local NGOs to collect information of the disaster-ridden areas and provide support. Up to now, 10 satellite phones have been provided to nature reserves in Sichuan. The Chengdu office has provided six tones of rice to Wolong Nature Reserve, with tents and other daily necessities sent to reserves in Mao County, Pingwu, Qingchuan and Beichuan. The Xi’an office has sent tents, candles, generators and protection apparels to Qingmuchuan Nature Reserve.

The Chengdu office has also sent staff to Longchi School in Longxihongkou, one of the seriously-hit areas, to collect impacts data for following relief actions. Financial support including donation from WWF-China staff and other environmentalists have been provided to Chengdu office for purchasing the most needed equipments and materials. A rescue team made of seven experienced volunteers has returned from the Qianfoshan Nature Reserve in An County with firsthand impacts data collected for further rescue work.

WWF-China Country Representative Dermot O’Gorman has expressed his sincere condolences to the victims and their families, and his deep respect to the rescuers and support to local partners in the affected areas. “WWF will provide full support to our local partners’ relief efforts. Once the conditions have stabilized, we will cooperate with forestry administrations and nature reserves to carry out impact assessment about the local communities, the wild pandas and their habitats, the nature reserves and the ecosystems for further protection,” he said.