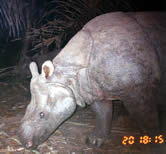 JAKARTA–After just a month in operation, specially designed video cameras installed to capture wildlife footage in the jungles of South East Asia have twice recorded remarkable images of the world’s rarest rhino accompanied by a calf.

But the success was not without incident as after a short inspection, the rhino mother charged the camera and sent it flying.

“With fewer than 60 Javan rhinos left in the wild, we believe this footage was well worth the risk to our equipment,” said Adhi Rachmat Hariyadi, who leads WWF-Indonesia’s project in Ujung Kulon National Park. “It’s very unusual to catch a glimpse of the Javan rhinos deep inside the rain forest. The motion triggered infrared video traps are a useful way to observe them and the ways they use their habitat in a more detailed way.”

Recordings of the Javan rhino are the highlight so far of the installation over recent months of improved  wildlife recording video cameras developed by US-based PixController Inc.  In its pioneering phase in Malaysia, the new system has already provided footages of rare Malayan tigers in the wild and a Sumatran Rhino in Borneo.

“Setting cameras such as these is always a challenge, especially with animals as rare and elusive as the Javan rhino,” said WWF Malaysia photographer Stephen Hogg. “The assault on the camera still has us baffled because we specifically use Infra Red (IR) lights as the source of illumination  so as to not scare animals away when the camera activates.”

The use of the motion controlled video traps over camera traps is yielding valuable insights into the behaviour of target and other species which will aid in their conservation.  The system was developed by Pixcontroller.

In the case of Javan rhinos, the new video traps replace wooden bamboo platforms nearly 10 metres off the ground at wallowing sites, which were difficult and time-consuming to construct, required safety training and precautions for users and offered limited viewing angles. From a scientific viewpoint, adverse angles and larger distances meant it was often impossible to identify particular rhinos.

By contrast, the video traps are readily relocated, generally safe to operate and surprisingly robust. “The camera tossed in our footage was relocated by a survey team and put back on its stand next day and hasn’t suffered molestation by a rhino since,” said Adhi Rachmat, WWF team leader in Ujung Kulon.

“We are proposing a test translocation of a few Javan rhinos in the near future to establish a new population in a new area. This requires hard data and reliable science and settting up video traps allows us to do that without stop sending researchers to spend the night on rickety bamboo platforms trying to observe these highly endangered rhinos,” said Adhi. “Since the video traps don’t have any moving parts and are very silent, they can be placed much closer than humans along the favourite haunts of the Javan rhinos, like salt licks, trails and mud wallows.”

“We are encouraged by the initial results from these video trap, and hope this data will help the park authorities to understand the population dynamics and behaviour of Javan rhinos better and help manage the threats to this population in a more scientific manner”, said Agus Priambudi, Head of Ujung Kulon National Park.

Javan rhinos are found only in two locations in the world with Ujung Kulong NP in Java, Indonesia estimated to have around 60 rhinos — more than 90 percent of the global population. To prevent the rhino population from going extinct from a sudden catastrophe like a diseases or other natural disasters, the Government of Indonesia recently launched rhino conservation strategy titled “Project Rhino Century (Proyek Abad Badak) in partnership with WWF, International Rhino Foundation (IRF), Yayasan Badak Indonesia (YABI), dan US Fish and Wildlife Service to create additional Javan rhino populations by translocating a few individuals from Ujung Kulon to another suitable site.

“The use of such cutting edge technologies for studying Javan rhinos should be encouraged more. We believe that the data generated from these video traps in the coming year or so will be of immense help in planning the test translocation of a few Javan rhinos to another suitable habitat – an effort IRF is planning to support,” said Susie Ellis, Executive Director of International Rhino Foundation. “Identification of individual rhinos and insights into their roles in the population will be invaluable in carrying out a successful relocation.”

The video trap instalment was done and monitored by a survey team consisting of biologists, including Ujung Kulon park rangers, WWF, and local people.

Contact Persons:
Agus Priambudi, Head of Ujung Kulon National Park, Telp XXXX, Email XXXX
Adhi Rahmat Hariyadi, Site Manager of WWF-Indonesia in Ujung Kulon National Park, m +62 818134178, email: ahariyadi@wwf.or.id
Susie Ellis, PhD, Executive Director, International Rhino Foundation, m 1-540-660-4152, email s.ellis@rhinos-irf.org
NOTES for EDITORS:
• Footage from the Javan rhino video trap and still photos from the footage can be downloaded from the WWF Press Room drop box at https://intranet.panda.org/documents/folder.cfm?uFolderID=61441
The log-in is: intranet@wwfint.org and the password is: dropbox For the highest quality image choose the large MPG file, while there is a shorter Flash version for quick viewing. A related article will appear on www.panda.org at embargo time.
• Javan rhinos are the rarest of the world’s five rhino species and are critically endangered. It is estimated that not more than 60 individuals live in Ujung Kulon.. About 37 of these individuals have been identified through camera traps, a critical part of WWF research of these rhinos.
•  Recent footage of a rare Malayan tiger is also available in the drop box, as per the directions above.

WWF’s mission is to stop the degradation of the earth’s natural environment and to build a future in which humans live in harmony with nature, by conserving the world’s biological diversity, ensuring that the use of renewable natural resources is sustainable, and promoting the reduction of pollution and wasteful consumption.