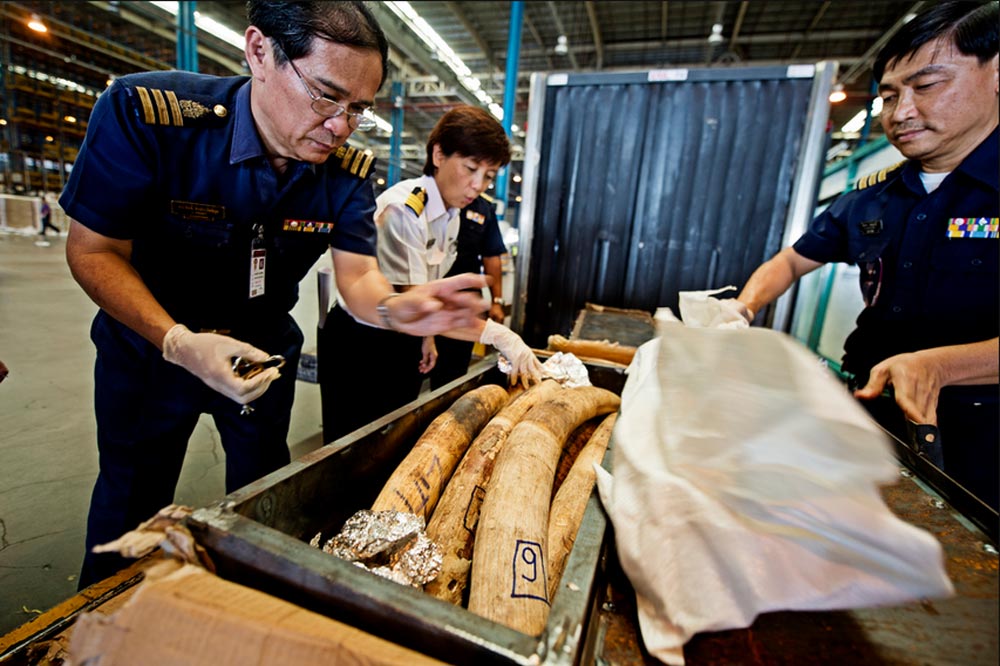 Illegal trade in ivory is at its highest levels in nearly two decades, and 2011 witnessed a ‘major surge’, according to a report released by the Convention on International Trade in Endangered Species of Wild Fauna and Flora (CITES).

The findings, largely based on ivory seizure information submitted by governments, will be presented and discussed at the 16th meeting of the Conference of the Parties to CITES (CoP16) to be held in Bangkok, Thailand from 3 to 14 March 2013.

The report analyses data from the Elephant Trade Information System (ETIS) managed by TRAFFIC on behalf of the CITES member States. ETIS is the world’s largest database of elephant product seizure records, with more than 18,300 cases, representing law enforcement actions in 89 countries and territories since 1989.

Analysis of ETIS confirms 2011 as the worst year on record for ivory seizures, with the period 2009-2011 including three of the top four years in which the largest quantities of ivory were seized worldwide.

In 2011 alone, there were 17 large-scale ivory seizures—more than double the highest previous figure of eight, in 2009, and totalling an estimated 26.4 tonnes of ivory. Complete figures are not yet available for 2012.

The report indicates that, following a period of relative stability from 1998 onwards, the global illegal trade in ivory began increasing from 2008 onwards, surging sharply in each successive year and reaching record levels in 2011.

“Right now, criminals are lining their pockets while Africa’s elephants are paying the ultimate price.”

Large-scale ivory seizures, those involving at least 800 kg of ivory in a single transaction, typically indicate the participation of organized crime. The ETIS data suggest that these crime syndicates have become stronger within Africa and more active over the last decade.

Commenting on the critical situation currently facing the African’s elephants, the CITES Secretary-General, Mr John E. Scanlon, said: “We need to enhance our collective efforts across range, transit and consumer States to reverse the current disturbing trends in elephant poaching and ivory smuggling. While being essential, enforcement efforts to stop wildlife crime must not just result in seizures – they must result in prosecutions, convictions and strong penalties to stop the flow of contraband. The whole ‘enforcement chain’ must work together.”

According to the report: “Thailand and China are the most important end-use markets driving illegal ivory trade,” with the ETIS analysis indicating that illegal trade volumes destined for China are three times greater than those heading to Thailand. Most raw ivory consignments are heading to these two destinations and nationals of both countries are heavily involved in the procurement of ivory throughout the African continent.

Trade patterns have shifted to Indian Ocean seaports. With unprecedented frequency, large-scale ivory shipments have either been seized in Kenya and the United Republic of Tanzania or exited Africa through ports in those countries, which have rapidly emerged as the two most prominent countries connecting African ivory with Asian demand. South Africa is also a country of concern for large flows of ivory, according to the ETIS report.

Ivory traffickers appear to be targeting Malaysia, along with the Philippines, Hong Kong SAR and Viet Nam, as key transit points along the smuggling chain. The sheer quantity of cargo moving through their major seaports makes detection of concealed ivory a severe enforcement challenge, while the identity of containers originating in Africa can be changed so that their onward shipment within Asia is less likely to attract attention, says the report.

A CITES report earlier this year revealed that tens of thousands of African elephants are being poached annually for their ivory.

The critical situation demonstrates the urgent need to implement and monitor the African Elephant Action Plan, created by all African elephant range states under the auspices of CITES in 2010.

TRAFFIC is a joint programme of WWF and IUCN.