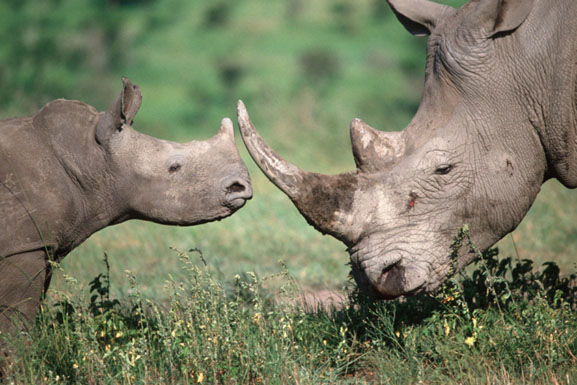 Rhino poaching statistics released today by the South African government reveal that a record 668 rhinos were killed across the country in 2012, an increase of nearly 50 per cent from the 448 rhinos lost to poachers in 2011. An additional five rhinos have been killed since the beginning of this year.

Arrests of suspected poachers and smugglers also increased in 2012, with 267 people now facing rhino-related charges. In November, a Thai man was sentenced to a record 40 years in prison for conspiring to smuggle rhino horns to Asia.

A recent TRAFFIC report found that rhino horns are believed to have medicinal properties and are seen as highly desirable status symbols in some Asian countries, notably Viet Nam. The increased value of rhino horn has enticed well-organized, well-financed and highly-mobile criminal groups to become involved in rhino poaching.

“Rhinos are being illegally killed, their horns hacked off and the animals left to bleed to death, all for the frivolous use of their horns as a hangover cure.”

In December, Viet Nam and South Africa signed an agreement aimed at bolstering law enforcement and tackling illegal wildlife trade including rhino horn trafficking. The agreement paves the way for improved intelligence information sharing and joint efforts by the two nations to crack down on the criminal syndicates behind the smuggling networks.

“Whilst we commend South Africa and Viet Nam for signing a Memorandum of Understanding regarding biodiversity conservation, we now need to see a joint Rhino Plan of Action being implemented, leading to more of these rhino horn seizures,” said Dr Jo Shaw, WWF-SA’s Rhino Co-ordinator. “There is also an urgent need to work closely with countries which are transit routes for illicit rhino horn, specifically Mozambique.”

Two Vietnamese men were detained in separate incidents earlier this month in Viet Nam and Thailand for smuggling rhino horns, which were believed to have been exported from Mozambique.

Both Mozambique and Viet Nam have been given failing grades by WWF’s Wildlife Crime Scorecard for failing to enforce laws meant to protect rhinos. The study also outlines important actions needed by South Africa, such as ensuring those arrested for rhino crimes are prosecuted and punished.