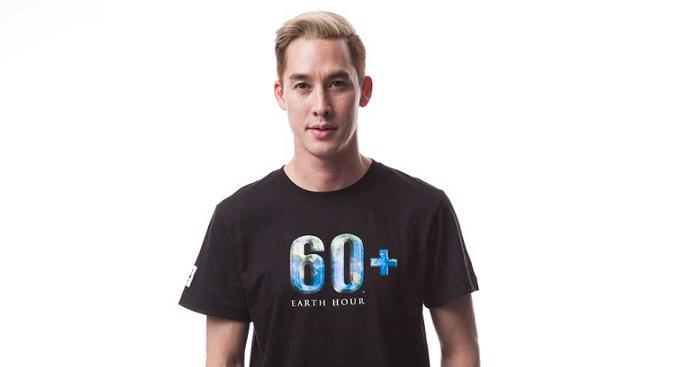 Singapore, 7 February 2013 – This Earth Hour, World Wide Fund for Nature (WWF) Singapore challenges Singapore to take action for the environment by turning their airconditioning up by one degree.

Media personality and newly-appointed Earth Hour ambassador Utt has issued this challenge to the Singapore public through the Earth Hour “I Will If You Will” platform. Utt promises to drop one piece of clothing for every 1,000 people who pledge to turn up their air-conditioning by one degree.

“Air-conditioning is one of the biggest contributors to energy usage in households and buildings in Singapore. In our tropical climate, many rely on it to stay cool, but we don’t realise that it is a vicious cycle – the more energy we use, the more carbon dioxide we release into the atmosphere, resulting in hotter weathers, and people using airconditioning at colder temperatures. We can break this cycle if people take the small, simple step to go one degree up,” said Elaine Tan, CEO, WWF-Singapore.

“Air-conditioning accounts for up to 60% of the electricity bills of buildings in Singapore. NEA supports simple steps to reduce energy consumption in Singapore, such as raising air-conditioning temperatures in some of our buildings,” said National Environment Agency’s CEO, Andrew Tan. “The 1 Degree Up challenge complements our efforts to encourage households and building operators to conserve energy and reduce their utility bills by keeping air-conditioning temperatures within the comfort range of 23 to 25 degrees Celsius as recommended by the Singapore Code of Practice for Airconditioning and mechanical ventilation in buildings SS 553.”

The public can take up the challenge set by the ambassadors from today via the Earth Hour microsite at http://earthhour.wwf.sg/. Businesses looking to make the commitment to turn their air-conditioning up by one degree can inform WWF-Singapore via earthhour@wwf.sg.

WWF also invites the Singapore public to re-imagine sustainability on Saturday, 23 March 2013, by busting their moves on energy absorbing pads to convert the kinetic energy produced to electricity. The public can now register on the Earth Hour microsite at http://earthhour.wwf.sg/.

In 2012, the Earth Hour campaign in Singapore received the highest level of support since its inception in 2009. WWF-Singapore saw more than 6,000 participants gathered at Ngee Ann City for the official Lights Out ceremony with over 400 organisations pledging their support, from switching off their lights to proactively engaging staff, customers and other stakeholders in various initiatives to protect the environment. Over  1,500 Earth Hour ambassadors also formed a spectacular and unprecedented Earth Hour “60+ Singapore” human formation on Singapore’s iconic shopping street.

Earth Hour 2013 is made possible with the support of Urban Redevelopment Authority (URA) as the Official Venue Partner for the Lights Out event to be held at Marina Bay Singapore, NEA, major sponsor IKEA, as well as partners – Philips Lighting, Leo Burnett, Mindshare, The Singapore Scout Association and Weber Shandwick.