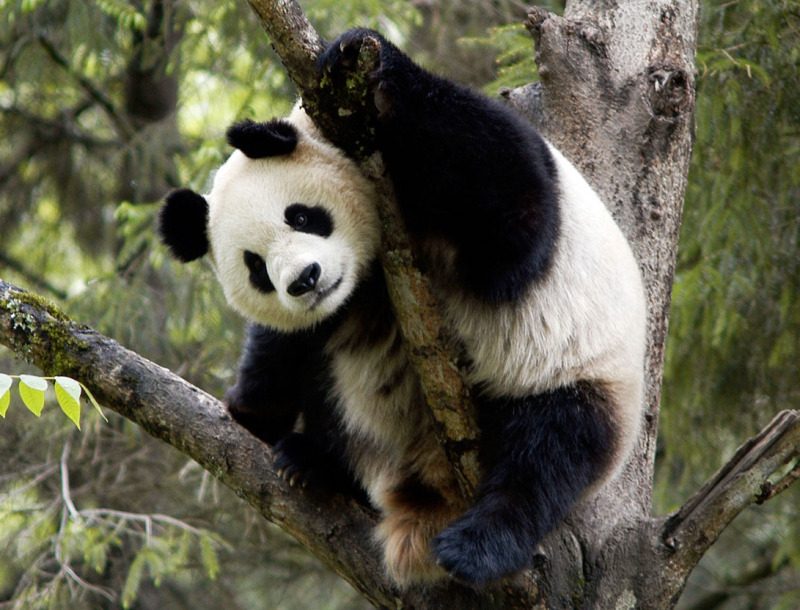 There’s more to our work in China than protecting pandas

You depend on it for work. You use it to communicate with family and friends all over the world. It’s where you store your photos and your music. You may be reading this article on it.

It’s hard to imagine life without your laptop. But the way we make laptops needs a reboot – otherwise, the whole system could crash.

Your laptop was probably made in China’s Yangtze River basin. It’s one of the world’s most important manufacturing hubs and the powerhouse of China’s rapidly growing economy.

But the pressure of global demand and the frantic pace of development has left the region’s natural resources stretched and unable to cope. If its environment continues to suffer, the repercussions will be felt well beyond the forests and floodplains of the Yangtze.

China is the world’s most populous country. Within the next couple of decades, it will become the largest economy. Countries all over the world depend on products made in China.

What happens in China is crucial to the future of the planet. And the Yangtze basin, the cradle of Chinese civilisation, holds the key.

The Yangtze basin is home to more than 400 million people – a third of China’s population – and generates 40% of China’s GDP. It holds 35% of the country’s fresh water, and produces half its grain and 70% of its rice and fish. It’s also home to unique and endangered species, including the giant panda.

But rapid industrialization and urbanization, agriculture and fish farming, mining, dams and other developments are damaging the natural environment and the life it supports. The waters of the Yangtze are now heavily polluted and unsuitable for drinking, and pose a threat to human health. Changes to the river basin’s natural patterns also increase the risk of flooding.

The dolphins of the Yangtze River show the tragic consequences of environmental damage. A survey in 2006 failed to spot a single baiji dolphin, and scientists fear it could now be extinct. Another species – the finless porpoise – is at high risk of extinction too.

Unless we can solve the challenges facing the region, they won’t be the only victims.

Linked by the iconic giant panda, WWF and China go back a long way.

We first began working with Chinese scientists and governments on panda conservation in 1980 – we were the first international conservation organization invited to work in the country.

At the time, the panda’s future looked bleak. Its habitat was shrinking fast and groups of pandas were isolated from each other.

We helped set up protected areas of habitat for pandas and link populations together with “green corridors”. Three out of four pandas now live in the 62 nature reserves we helped set up. By 2015, there will be 30,000 sq km of protected forest for pandas.

The work has been a big success. At the last count, there were 1,600 giant pandas in the wild – back in 1980, there were thought to be only 1,000. Other species, like the leopard and golden monkey, are benefiting too – as are local people, who depend on the forests for fuel and fresh water.

The forests where the giant panda lives also play a vital role in regulating the flow of water and nutrients in the Yangtze River. And it’s downstream that we’ve increasingly concentrated our conservation efforts.

The Yangtze basin’s unique system of rivers and wetlands supports an incredible diversity of species, as well as the livelihoods of its millions of human inhabitants. But nearly 1,000 lakes have already been lost to agriculture and other development, and other wetlands have been cut off from the river. As well as destroying habitats, this is playing havoc with the basin’s natural flood control system and water quality.

In 1998, disastrous floods in the region left more than 3,000 dead and millions homeless, and cost the Chinese economy billions of dollars. New government policies recognized how important it was to restore the Yangtze basin’s forests and wetlands.

We’ve been working with the government, local communities, businesses and other partners to bring the Yangtze back to health and manage the whole river basin in a sustainable way.

We’ve already helped to create a network of 100 nature reserves across 20,000 sq km of wetlands, and to link 40 lakes back into the Yangtze.

We’re also working with local people to demonstrate ways of making a better living while conserving the environment, from organic farming to sustainable fisheries.

Applying the international standards for hydropower we’ve helped develop will also reduce the impact of proposed new dams on the Yangtze. The Three Gorges Dam – the world’s largest hydropower development – has already been completed, but we successfully suggested improvements to make the dam’s water flow more closely resemble the Yangtze River’s natural patterns. This will help reduce stress to human and wildlife communities downstream that depend on these flow patterns.

Three-quarters of China’s energy comes from coal, but it also generates more renewable energy than any other country.

How can we continue to develop the economy while using natural resources wisely and maintaining a healthy environment? That’s the challenge we’re facing in the Yangtze Basin.

In a world that already consumes more resources than nature can provide, it’s also a crucial question for the whole planet. With our partners, we’re pioneering new ways to address this challenge.

“China has the opportunity to lead in a new direction by creating a development model that sustains natural systems, within the country and abroad, upon which all life depends,” says Jim Leape, Director-General of WWF International.

In the Yangtze and other parts of China, we’re helping to create such a model. Key areas of work include: