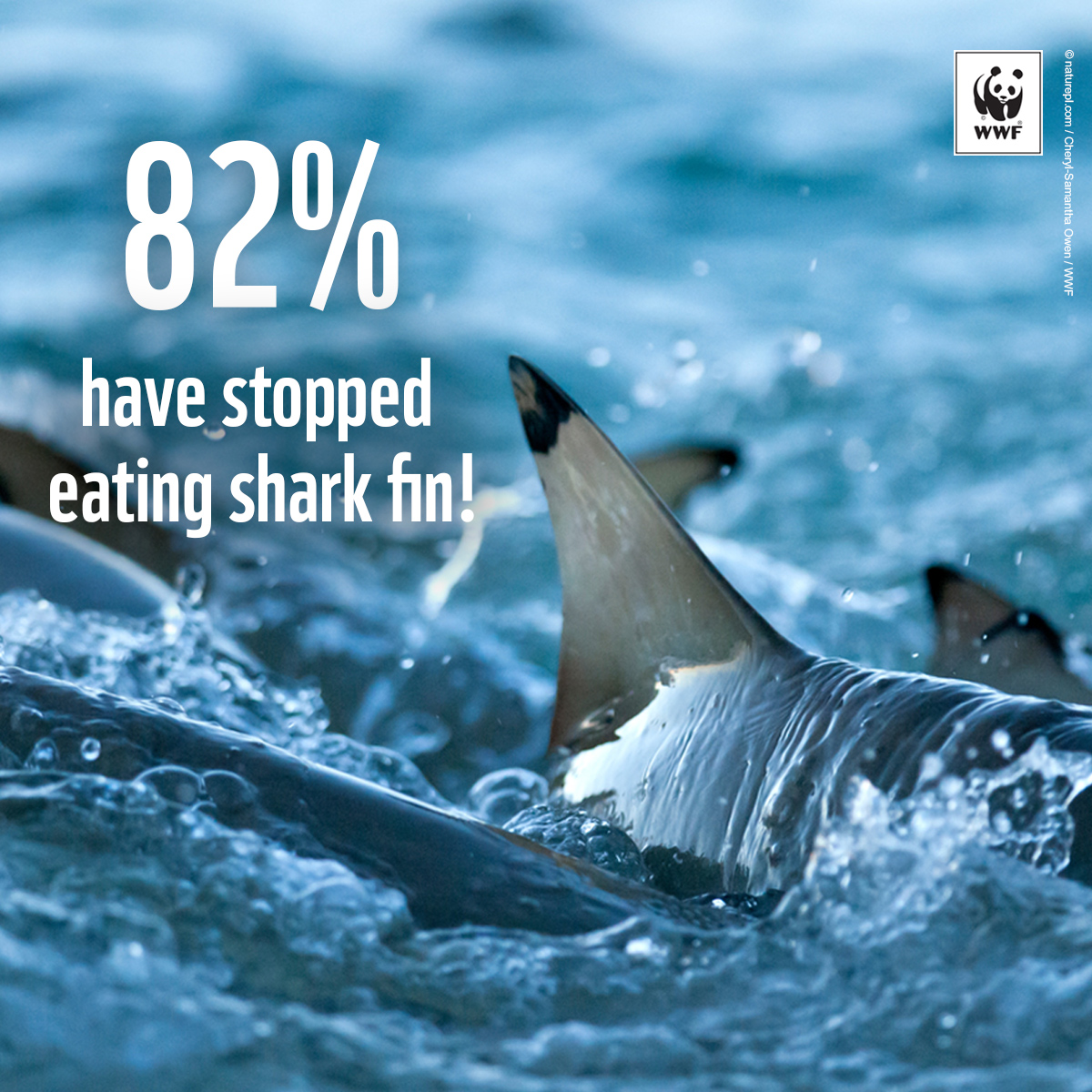 19 JANUARY 2017, SINGAPORE – WWF-Singapore has called for the local F&B industry to take action by being part of the global conservation movement and phasing out of shark products from the market. In the past five years, the global movement to ban shark fin has gathered momentum with over 18,000 international properties now refusing to offer dishes made from the endangered species.

“Consumers are recognising the value of keeping sharks off our plates and in the oceans, where they play a critical role in the marine ecosystems. After five years of pressure from consumers, most major hotels in Singapore have removed shark fin from their menus. It is time for the rest of the local F&B industry to follow suit,” said Ms Elaine Tan, Chief Executive Officer of WWF-Singapore.

Consumer demand for shark fin in Singapore is already on the decline. A study by WWF-Singapore last year[1] found that 82% of Singaporeans surveyed had not consumed shark fin for at least a year. The survey also found that shark protection (53%) and environmental concerns (44%) are among the top reasons cited by Singaporeans for the decline in consumption, along with the changes in local dining culture (53%).

Highlighting the need for chefs to respond to market changes, Ms Tan added, “Chefs are in a unique position given the sheer numbers of diners and suppliers they reach on a daily basis. Every purchase they make is a large-volume, high-impact decision. This position of responsibility can make a real impact in conserving endangered marine species by phasing out shark fin locally.”

Grand Hyatt Singapore was among the first hotels in Singapore to remove shark fin from its menus in March 2012, as part of a global decision taken by the hotel.

Said Chef Lucas Glanville, Director of Culinary Operations, Grand Hyatt Singapore & South East Asia, “Initially, it was a sensitive decision to remove shark fin as it was part of the local culture and our business. We reviewed our menus, offered our guests amazing sustainable options and ensured we provided proper communication to our guests and associates; as a result our wedding business has never been stronger than what it is today.”

Nearly 25 per cent of sharks and rays now face extinction, according to the IUCN Shark Specialist Group, with overfishing for fins and meat being the major drivers. In 2016, 4 species of sharks were added to the watch list of the Convention on International Trade in Endangered Species of Wild Fauna and Flora (CITES), bringing the total to 20.

“Removing sharks from the food chain has serious consequences for marine ecosystems, which in turn has repercussions for people everywhere,” said Andy Cornish, Global Shark Programme Leader, WWF-International. “Most international hotel chains and food and beverage outlets have recognised the serious threat that shark finning poses to the marine eco-system. We urge those in the food and service industries to get in line with the global movement to preserve our oceans.”

Trade in sharks continues to be rampant across Asia today. Tens of million of sharks are caught annually. Indonesia, India and Pakistan account for 25% of the global catch of sharks and rays, to feed demand by shark fin consumer markets in East and Southeast Asia.

About WWF  (World Wide Fund for Nature)
WWF is one of the world’s largest and most respected independent conservation organizations, with over 5 million supporters and a global network active in over 100 countries. WWF’s mission is to stop the degradation of the earth’s natural environment and to build a future in which humans live in harmony with nature. WWF-Singapore’s campaigns centre around sustainable consumption, raising awareness and prompting action on issues such as deforestation, haze pollution, seafood sustainability and the illegal wildlife trade. wwf.sg