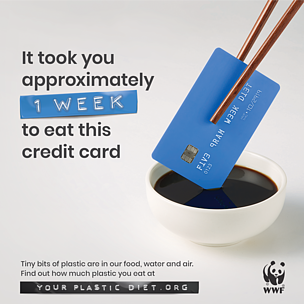 SINGAPORE, 12 June 2019 – A new study finds on average people could be ingesting approximately 5 grams of plastic every week, which is the equivalent weight of a credit card. Based on a study carried out by the University of Newcastle, the analysis suggests that people are consuming about 100,000 tiny pieces of plastic – or 250 grams – every year.


These findings are an important step towards understanding the impact of plastic pollution on humans. The University of Newcastle is the first to combine insights from over 50 studies globally on the ingestion of plastic by people.


Findings reveal that microplastics are contaminating the air, food and water consumed by humans. The single largest source of plastic ingestion globally is through water, both bottled and tap.

Of the consumables studied, the highest recorded plastic levels were found in shellfish, beer and salt. The findings may be an underestimate because the microplastic contamination of staple foods such as milk, rice, wheat, corn, bread, pasta and oils has yet to be studied.

“These findings must serve as a wake-up call to governments. If we don’t want plastic in our bodies, we need to stop the millions of tons of plastic that continue leaking into nature every year. In order to tackle the plastic crisis, we need urgent action at the government, business and consumer levels, and a global treaty with global targets to address plastic pollution,” said Marco Lambertini, WWF International Director General.

The report currently points towards a global average ingestion rate of plastic by humans of approximately 5 grams per week, with microplastics originating from the degradation of larger plastic or small particulates released into the environment. The impacts of microplastics ingestion on human health are not yet fully understood.

According to WWF, the leakage of plastic into the environment and food chain has been met with an inadequate global response by governments, which need to play a key role in transforming the global plastic system to address plastic pollution.

In conjunction with the report, WWF’s latest campaign allows people to get an estimate of their consumption of microplastics at yourplasticdiet.org.

In addition, people in Singapore can add their voice  to help solve the crisis and support:

Global recommendations in the report call for governments to agree to a legally binding international treaty to stop plastic pollution from leaking into the ocean. Measures include setting measurable national targets for plastic reduction and waste management, legislation to hold businesses accountable for the plastics they produce and supporting research on plastics and microplastics. A global petition for a legally binding treaty on marine plastics pollution has already garnered over 500,000 signatures.

Ingestion is just one aspect of a much wider plastics crisis. Plastic pollution is a major threat to wildlife, not only through microplastic ingestion but also via entanglement in discarded fishing nets and habitat degradation such as plastic-strewn beaches and mangroves. Plastic pollution also has damaging economic consequences, impacting the fisheries and aquaculture industries. The UN Environment Programme (UNEP) estimating its annual economic impact on the ocean economy at US$8 billion.