Year of the Tiger begins with big cats in big trouble 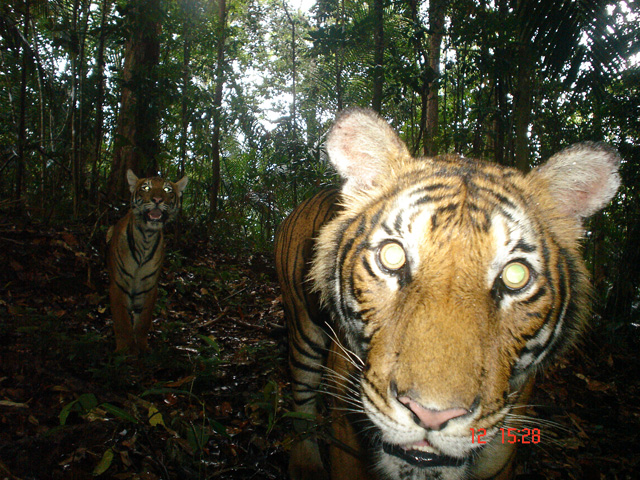 Year of the Tiger begins with big cats in big trouble

WWF outlined today the current top 10 trouble spots for tigers in a first-time interactive map that provides a unique overview of threats faced by wild tigers.

The map comes as many Asian countries and the world prepare to celebrate the start of the Year of the Tiger, which begins on Feb. 14.

However, there are only an estimated 3,200 tigers left in the wild, and they face increasing threats including habitat loss, illegal trade and climate change, according to the map.

There is hope though, as tiger range countries, conservation groups and organizations such as The World Bank will gather in Russia in September to lay out an ambitious agenda for saving wild tigers at a special summit.

“Tigers are being persecuted across their range – poisoned, trapped, snared, shot and squeezed out of their homes,” said Mike Baltzer, Leader of WWF’s Tiger Initiative. “But there is hope for them in this Year of the Tiger. There has never been such a committed, ambitious, high-level commitment from governments to double wild tiger numbers. They have set the bar high and we hope for the sake of both the tiger and people that they reach it. Tigers are a charismatic species and a flagship for Asia’s biological diversity, culture and economy.”

In the lead up to the summit, all 13 tiger range countries recently committed to the goal of doubling tiger numbers in the wild by 2022 at a 1st Asian ministerial conference on tiger conservation in Hua Hin, Thailand.

The map is designed to raise awareness of these issues and help tiger range states achieve this crucial goal.

Additional threats to wild tigers highlighted in the map include:

Already, three tiger sub-species have gone extinct since the 1940s and a fourth one, the South China tiger, has not been seen in the wild in 25 years.

Tigers live in 40 percent less habitat since the last Year of the Tiger in 1998, and they occupy just seven percent of their historic range. But they thrive in the wild when they have strong protection from poaching and habitat loss and enough prey to eat.

“We know that wild tigers need protection, prey and secure habitat, but these alone will not save the big cats”, said Amanda Nickson, Director of the Species Programme at WWF International. “What is also needed is sustained political will from the highest level of government in the tiger range states and this Year of the Tiger, and at the summit, these countries will have the chance to commit to making tiger conservation work.”

A glimpse of hope

Although the map shows many trouble spots, there is still hope for wild tigers. New camera trap photos of a tigress and one of her cubs obtained from a selectively logged-over forest in Malaysia show that tigers may be able to persist in such altered habitats.

The photo shows the tigress checking out a WWF camera trap with one of her two cubs. Researchers from WWF-Malaysia working in the area have caught the same female tiger on camera several times during the last several years, but this was the first time they saw that she had become a mother.

The photos, taken around September 2009, were from a camera trap retrieved last month, and set on a ridge of about 800 meters in elevation.

“This is really encouraging to see a mother with her cub,” said Mark Rayan Darmaraj, senior field biologist, WWF Malaysia. “Such rare photographic evidence of breeding success magnifies the importance of this habitat for tiger conservation in Malaysia.”