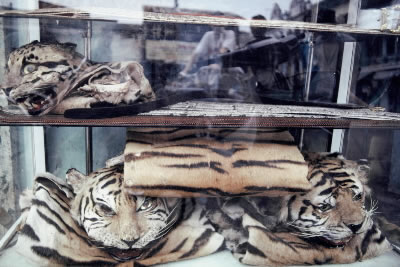 The “Chinese New Year” issue (No. 1008/9 Feb 11, 2010) of 8 Days featured artiste Ms Wong Li Lin draped with what appears to be a real tiger skin. Contained in the same issue spread over 8 pages, are photographs of Ms Wong in various poses in the tiger skin.

On the 12th of February WWF has written an email to 8 Days with the following text:

“We refer to the latest issue (No. 1008/9 Feb 11, 2010) of 8 Days where the cover features artiste Ms Wong Li Lin draped with what appears to be a real tiger skin. Contained in the same issue spread over 8 pages, are photographs of Ms Wong in various poses in the tiger skin.

Whether the tiger skin used is real or not, the photographs demonstrate a lack of sensitivity to the plight of dwindling tiger populations in the wild. From an estimated 100,000 at the beginning of the 20th century, there are now as few as 3,200 tigers left occupying only seven percent of their historic habitat ranges. Today, tigers in the wild are poisoned, shot, trapped, and snared to meet the demands of a continuing illegal trade in tiger parts, including its skin. Tiger parts are used as status symbols, decorative items and Asian medicine.

Tiger conservation is an important issue, with WWF and other partner NGOs stepping up on our awareness work on their growing threats. In tandem with WWF’s field conservation projects on tiger protection.

These photographs of Ms Wong in tiger skin could convey to the readers of 8 Days – mostly young people – that tiger skin as a fashion item is acceptable. It is not.

As a responsible corporate citizen, Mediacorp / 8 Days can choose to help spread the tiger conservation message to their readers and avoid images that may trivialize illegal wildlife parts. As an admired artiste, Ms Wong can also choose to support the nature cause by advocating its protection, not destruction.

We sincerely hope that Mediacorp will clarify publicly the misrepresentations that these images and feature story on Ms Wong, could give rise to – specifically on the use of tiger skin. We would also appreciate if you could pass this message onwards to Ms Wong.

WWF Singapore will be publishing this letter on our website (www.wwf.sg) on 19 February 2010, and look forward to receiving your reply before then.”

The following reply from Mediacorp was received on the 12th of February:

“Thank you for your mail.
The tiger pelt was loaned to 8 DAYS specifically for the shoot.
We do not condone the harming of animals, and the realistic appearance of the tiger skin in the photos should in no way be construed as such.
We have received a few letters expressing concerns over the lack of political correctness. Please be assured that we do not take this feedback lightly, and regret any unintended offence caused.”