Extinct Javan elephants may have been found again – in Borneo 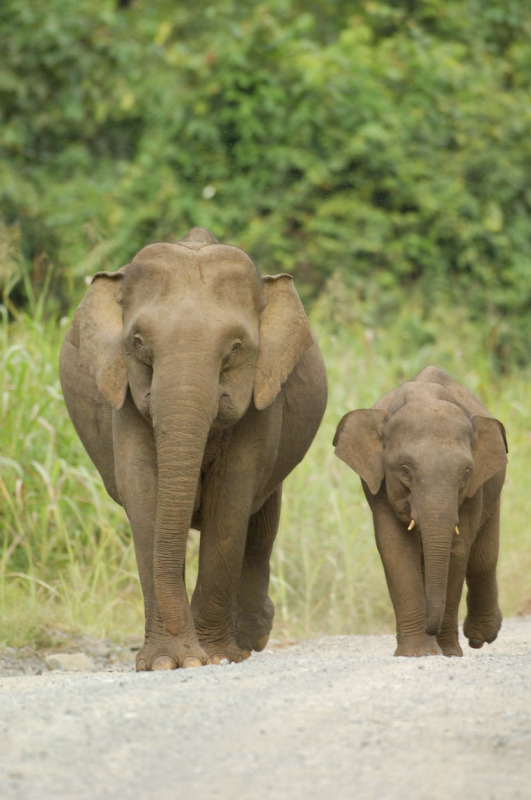 Extinct Javan elephants may have been found again – in Borneo

Kota Kinabalu, Malaysia: The Borneo pygmy elephant may not be native to Borneo after all. Instead, the population could be the last survivors of the Javan elephant race – accidentally saved from extinction by the Sultan of Sulu centuries ago, a new publication suggests.

The origins of the pygmy elephants, found in a range extending from the north-east of the island into the Heart of Borneo, have long been shrouded in mystery. Their looks and behaviour differ from other Asian elephants and scientists have questioned why they never dispersed to other parts of the island.

But a new paper published today supports a long-held local belief that the elephants were brought to Borneo centuries ago by the Sultan of Sulu, now in the Philippines, and later abandoned in the jungle. The Sulu elephants, in turn, are thought to have originated in Java.

Javan elephants became extinct some time in the period after Europeans arrived in South-East Asia. Elephants on Sulu, never considered native to the island, were hunted out in the 1800s.

“Elephants were shipped from place to place across Asia many hundreds of years ago, usually as gifts between rulers,” said Mr Shim Phyau Soon, a retired Malaysian forester whose ideas on the origins of the elephants partly inspired the current research. “It’s exciting to consider that the forest-dwelling Borneo elephants may be the last vestiges of a subspecies that went extinct on its native Java Island, in Indonesia, centuries ago.”

If the Borneo pygmy elephants are in fact elephants from Java, an island more than 1,200 km (800 miles) south of their current range, it could be the first known elephant translocation in history that has survived to modern times, providing scientists with critical data from a centuries-long experiment.

Scientists solved part of the mystery in 2003, when DNA testing by Columbia University and WWF ruled out the possibility that the Borneo elephants were from Sumatra or mainland Asia, where the other Asian subspecies are found, leaving either Borneo or Java as the most probable source.

The new paper, “Origins of the Elephants Elephas Maximus L. of Borneo,” published in this month’s Sarawak Museum Journal shows that there is no archaeological evidence of a long-term elephant presence on Borneo.

“Just one fertile female and one fertile male elephant, if left undisturbed in enough good habitat, could in theory end up as a population of 2,000 elephants within less than 300 years,” said Junaidi Payne of WWF, one of the paper’s co-authors. “And that may be what happened in practice here.”

There are perhaps just 1,000 of the elephants in the wild, mostly in the Malaysian state of Sabah. WWF satellite tracking has shown they prefer the same lowland habitat that is being increasingly cleared for timber rubber and palm oil plantations. Their possible origins in Java make them even more a conservation priority.

“If they came from Java, this fascinating story demonstrates the value of efforts to save even small populations of certain species, often thought to be doomed,” said Dr Christy Williams, coordinator of WWF’s Asian elephant and rhino programme. “It gives us the courage to propose such undertakings with the small remaining populations of critically endangered Sumatran rhinos and Javan rhinos, by translocating a
few to better habitats to increase their numbers. It has worked for Africa’s southern white rhinos and Indian rhinos, and now we have seen it may have worked for the Javan elephant, too.”

Notes to editors
• The Sarawak Museum Journal article on the “Origins of the Elephants Elephas Maximus L. of Borneo,” can be downloaded at http://assets.panda.org/downloads/pages_from_originofelephants_in_borneofinal2oct07_2.pdf A related feature article can be found in the features section of www.panda.org. An attached document provides links to high resolution photographs. Broadcast quality footage will be available for access through www.panda.org/broadcast shortly before the embargo time.

• The elephants are found primarily in the state of Sabah in Borneo Malaysia, with a few individuals having a part of their home range across the border in East Kalimantan, Indonesia.

• Large areas of Borneo’s forest are being rapidly cleared and replaced with tree plantations for rubber, palm oil and timber production and satellite tracking has found that the pygmy elephants prefer the same flat, lowland forest as commercial industries do, leading to competition for habitat.

• WWF is working to assist Borneo’s three nations (Malaysia, Indonesia and Brunei) to conserve the area known as the Heart of Borneo – a total of 191,402 square kilometres of equatorial rain forest – through a network of protected areas and sustainably managed forest.

• WWF is now known simply by its initials.

WWF’s mission is to stop the degradation of the earth’s natural environment and to build a future in which humans live in harmony with nature, by conserving the world’s biological diversity, ensuring that the use of renewable natural resources is sustainable, and promoting the reduction of pollution and wasteful consumption.

Extinct Javan elephants may have been found again – in Borneo
DOWNLOAD

Discover what WWF is doing in The Heart of Borneo

Asian elephants – in the wild, at risk everywhere