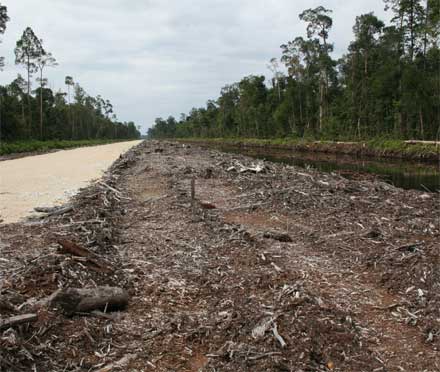 Pekanbaru, INDONESIA – One of the world’s biggest carbon stores and a key tiger habitat are threatened by a new logging road in Riau Province, Sumatra, according to a new investigative report published today.

An absence of permits and other irregularities suggest that the new road cutting into Kampar peninsula is likely to be illegal, says Riau’s Eyes on the Forest group, a coalition of local NGO network Jikalahari, Walhi Riau, and WWF-Indonesia.

The road, like another exposed in January threatening indigenous peoples, elephants, orangutans and tigers in Sumatra’s Bukit Tigapuluh forest landscape, has been constructed by companies linked to controversial conglomerate Asia Pulp and Paper (APP).

“It is morally reprehensible for one of the world’s largest paper companies to so brazenly ignore Indonesian laws and destroy the natural resources that belong to the people of Riau,” said Teguh Surya of Walhi Riau.

“We strongly urge APP to join the ranks of responsible businesses and conduct its operations within the law. Until that time, the world’s paper buyers and investors should stop doing business with APP.”

Kampar peninsula can be considered a single hydro-ecological system, consisting entirely of a single dome of peat at depths mostly over 10 meters – extremely deep for a peatland, with an enormous store of carbon.

Drainage and plantation development activities on the top of the Kampar peat dome could cause the dome to collapse and emit large amounts of carbon, according to Eyes on the Forest.

Until 2002, the 700,000 ha of Kampar peninsular were still fully covered by by natural forest, but clearing for APP and APRIL pulp mills and related plantation development has been the major factor in cover being reduced to 400,000 ha by 2007

The Kampar peninsula area is also considered one of the last havens for critically endangered Sumatran tigers, whose wild population is estimated to be down to just 400-500. It is feared that Sumatran tigers may be on course to follow Indonesia’s Java and Bali tigers into extinction.

The landscape was designated a “regional priority” tiger conservation landscape by the world’s leading tiger scientists in 2006. A preliminary estimate by WWF-Indonesia shows that a well-managed Kampar peninsula could be home to as many as 60 tigers.

“Even as our investigators were out surveying the site last month, they came across tiger tracks walking along the APP logging road,” said Nursamsu of WWF-Indonesia and Eyes on the Forest coordinator.

“But the tigers of Kampar don’t stand a chance once APP begins logging full-scale and the poachers discover there’s easy access to this critical tiger habitat.”

Local NGO network Jikalahari and WWF have formally proposed that the Ministry of Forestry protect the natural forest of Kampar. Jikalahari also jointly signed an MoU with Siak and Pelalawan District Administrations at the UN Climate Change Conference in Bali last year.

APP told Eyes of the Forest that the Siak district government had granted the company permission to build the highway to connect the two remote villages of Teluk Lanus and Sungai Rawa. But satellite images show that the road was not built anywhere close to the two villages, but does connect to two new logging concessions affiliated with APP.

”APP claimed that it was building this state-of-the-art, paved highway for the benefit of the local communities,” said Susanto Kurniawan of Jikalahari.

“It’s shameful to see a multibillion-dollar enterprise hiding behind the needs of desperately poor, isolated villagers, who will receive absolutely no benefit from this road but will likely suffer the consequences of APP’s activities.”

The logging concessions also suffer from irregularities, not least being an apparent contravention on clearing natural forest in good condition for plantation development or clearing on deep peat soils. Both concessions are based on licenses issued by District heads, who are not supposed to issue such licenses, according to Eyes on the Forest.

As well as Bukit Tigapuluh, APP also is currently threatening the Senepis and Kerumutan peatland forests in central Sumatra, Eyes on the Forest said.