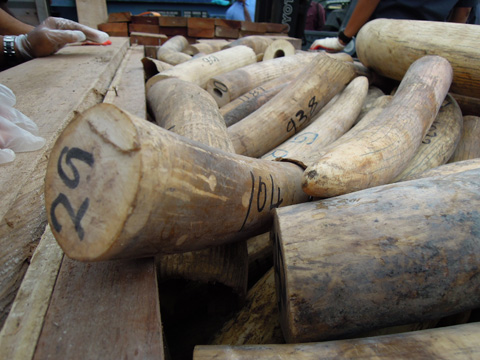 The next steps taken by the Agri-Food and Veterinary Authority and Singapore Customs will be as important as the seizure itself.

Both organisations urge the authorities to notify CITES of the seizure, allow an independent audit of the seized tusks and provide the details to the Elephant Trade Information System (ETIS), the world’s largest database of elephant product seizure records.

If the 1,099 tusks are to be returned to the country of origin, there may a chance for them to slip back into the supply chain of illegal wildlife products. Therefore, WWF-Singapore and TRAFFIC Southeast Asia encourage Singaporean authorities to incinerate the tusks once the audit and investigations are complete.

Globally, illegal trade in ivory is at its highest levels in nearly two decades, and 2011 witnessed a ‘major surge’, said a report released by the Convention on International Trade in Endangered Species of Wild Fauna and Flora (CITES) in December 2012.

Asia is contributing significantly to the worldwide demand for illegal wildlife products, as the rising affluence in the region results in an increase in Asian consumers with the means to purchase illegal products including Elephant ivory. Tens of thousands of African elephants are estimated to be killed annually to supply the ivory markets in Asia.

“This seizure is a big win for the Singapore authorities, but it also reminds us that Singapore needs to be vigilant and should not be used as a loophole for illegal wildlife trade passing through to Asia. This must continue to be a critical issue because Singapore prides itself on its effective enforcement system. Therefore, Singapore can be a leading voice at the 16th CITES meeting taking place in Bangkok in early March,” said Elaine Tan, CEO, WWF-Singapore.

“This seizure very clearly illustrates the need to not only increase protection for elephants in range States, but to increase efforts to disrupt trade chains and to put the kingpins behind the poaching and trade out of business,” said Dr Chris R. Shepherd, Deputy Regional Director of TRAFFIC Southeast Asia.

“Singapore has the capacity to put an end to its role as a transit point for the illegal ivory trade. Enforcement and continued vigilance should now become their major focus.”

Both organisations also urge Singapore authorities to clarify how much ivory it still holds in stockpiles and how these, and seized ivory, are being managed.