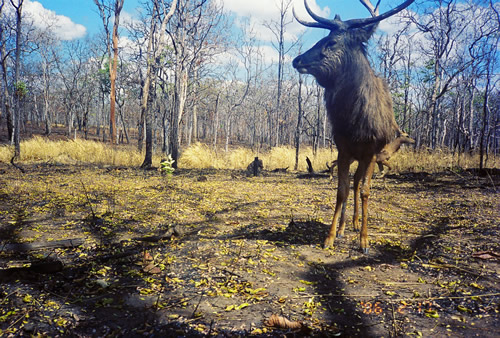 Bangkok, Thailand – The Greater Mekong region’s majestic and mysterious wild ungulates – animals with hooves – many of whom are unique to the region are on the edge of disappearing unless regional governments boost protection and intensify efforts to restore their numbers and their habitats, according to a new WWF report, Rumble in the Jungle.

The 13 ungulates of concern profiled in the report vary in species and status: from dog-sized deer to culturally significant wild cattle; from large antlered species to others so seldom seen that they have taken on mythical status. What is known, is that their futures are uncertain and for some it is already too late.

Two species endemic to the Greater Mekong region, the kouprey and Schomburgk’s deer, became globally extinct in the 20th century, while the hog deer and saola are on the edge of disappearing from the region and a number of other species face a similar fate in countries they once inhabited, including Eld’s deer and banteng.

“The extraordinary variation in habitats in the Mekong region has resulted in the greatest diversity of hooved animals on earth. Four new species have been discovered in the last 20 years which is unparalleled,” said Dr. Thomas Gray, Manager of WWF-Greater Mekong’s Species Programme. “While human pressures, such as hunting and habitat destruction, are fast eroding populations of these extraordinary species, there is still time to save them if governments put biodiversity, and its protection, at the heart of decision-making.”

Little is known about many of the region’s hooved mammals; the saola’s discovery in 1992 was described as one of the most spectacular zoological discoveries of the 20th century; the species has still not been observed by scientists in the wild and the difficulty in detecting the secretive animal has prevented making a precise population estimate, but numbers could be in the 10’s to a couple of hundred.

“While development is encroaching in the saola’s habitat, the greatest threat comes from illegal hunting. Saola are caught in wire snares set by hunters to catch other animals,” added Dr. Gray. “In Vietnam, a new approach to law enforcement, supported by WWF’s Carbon and Biodiversity Project, is delivering good results with locally employed forest guards patrolling reserves and removing over 14,000 snares annually.”

The world’s second smallest deer species, the leaf muntjac, so called because a single large tree leaf can wrap its body, was first recorded in 1999 in Myanmar. Sightings of the animal are so rare that scientists have not been able to assess its full distribution and status. While the sambar deer is among the giants of the ungulate world – of all living deer species only moose and elk can attain sizes larger than this species. Sambar numbers have declined severely throughout the Mekong region due to hunting.

The banteng, considered to be one of the most beautiful and graceful of all wild cattle species, have declined by 80 percent since the late 1960’s. Cambodia’s Eastern Plains – the largest intact tropical dry forest in southeast Asia – is host to the world’s largest population of banteng, numbering between 2,700 – 5,700 individuals. Illegal hunting and international trade for their horns is a major factor in the species decline.

“Across Asia wild cattle and large deer comprise the majority of the prey selected by tigers,” added Dr. Gray. “Conservation of the region’s ungulate species is inexplicably linked to the plight of the Greater Mekong’s tigers, whose numbers have fallen from 1,200 to about 350 since 1998. Further declines in prey species would deal a serious blow to the remaining population of tigers that rely on these animals for food.”

Ungulates of the region are also crucial food sources for three critically endangered vultures in the region. Red-headed, slender-billed and white-rumped vulture have declined dramatically in the Indian subcontinent due to poisoning from the veterinary drug diclofencac. The remnant populations in Myanmar and Cambodia’s Eastern Plains landscape represent the best hopes of the survival of these iconic species.

“The status of deer and cattle species is one indicator of the health, diversity and resilience of the entire Greater Mekong region’s natural environment,” concluded Dr. Gray. “The well-being and recovery of these species is therefore an important part of the sustainable management of the region. Regional leaders have already affirmed that healthy economic growth goes hand in hand with healthy and productive nature and wildlife, but fast and effective responses are needed.”

WWF is working with governments and partners to recover and restore ungulate populations to forests where they were once abundant, and reconnect forest habitat to ensure populations can increase. As part of this effort, WWF is supporting enhanced protected area management and law enforcement, and fostering sustainable forestry, alternative forest uses and sustainable livelihoods to help alleviate further pressures on remaining populations of the region’s unique ungulates.