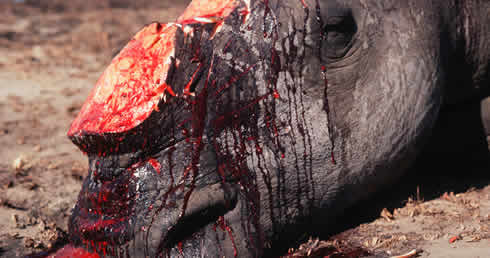 South Africa – More rhinos have been killed in South Africa in the past 10 months than were killed in all of 2010, new poaching numbers reveal. Statistics from South Africa National Parks show that 341 animals have been lost to poaching so far in 2011, compared to a record total of 333 last year.

South Africa’s grim milestone comes on the heels of an announcement by WWF last week that rhinos have gone extinct in Vietnam. The carcass of Vietnam’s last Javan rhino was found with a gunshot wound and without its horn.

At a meeting of the Convention on International Trade in Endangered Species (CITES) last year, the international community concluded that the increase in rhino poaching has been caused largely by demand for horn products in Vietnam. Law enforcement efforts, while increasing, are not yet sufficient to protect rhinos from poachers or stop the smuggling and sale of their horns by organized crime rings.

“It’s hardly surprising the horn was missing from the last rhino as Vietnam is the preeminent market destination for illegally sourced rhino horns,” says Tom Milliken, TRAFFIC rhino programme coordinator.
In addition to being the biggest consumer of rhino horn, Vietnam is also a major market for tiger parts and other products derived from endangered species. Populations of tigers in the country are alarmingly low and could soon follow the Vietnamese Javan rhino into extinction.

“The unfounded rumour that rhino horn can cure cancer most likely sealed the fate of the last Javan rhino in Vietnam,” says Dr. A. Christy Williams, WWF’s Asian rhino expert, “This same problem is now threatening other rhino populations across Africa and South Asia.”

Of the five species of rhinoceros, three are critically endangered. With the loss of the Vietnamese Javan rhino, there are now fewer than 50 Javan rhinos remaining, all in one national park in Indonesia.

“It’s tragic that the Javan rhino has been wiped out in Vietnam by the same forces that are driving rhino poaching in Africa. This is the ultimate wake-up call for the Vietnamese government to turn aggressively on its internal rhino horn market,” Milliken added.

South Africa has been the focal point of poaching because it has the largest population of rhinos in the world. Law enforcement efforts there have been scaled up resulting in more arrests, and some of those convicted are being sentenced to lengthy prison terms.

However, demand for medicinal products containing rhino horn continues to increase in Vietnam and other parts of Asia. Rhino horn has no proven ability to treat cancer and is no longer a part of the official Chinese traditional medicine pharmacopeia.

Despite an international ban on commercial trade under CITES, rhino horn continues to be smuggled illegally from Africa to Asia. Additionally, legal loopholes allowing for the export of rhino hunting trophies are being exploited in some South African provinces. Improvements are needed in the regulation of hunting permits and the management rhino horn stock piles in the country.

“Since armed protection for rhinos in South African national parks is strong, poaching syndicates are likely to shift to countries with weaker enforcement power, including possibly Asian countries that may be caught off-guard,” said Dr. Carlos Drews, Global Species Programme Director at WWF. “To break the illegal trade chain, governments in source, transit and consumer countries must all scale up their efforts.”

“Vietnam should follow South Africa’s example and start sending poachers, traders, smugglers and sellers to jail,” says Dr. Joseph Okori, WWF’s African rhino programme coordinator. “In order to save rhinos from extinction, the criminal syndicates operating between South Africa and Vietnam must be uncovered and shut down for good.”

For additional information or to request an expert interview, please contact:

TRAFFIC, the wildlife trade monitoring network, works to ensure that trade in wild plants and animals is not a threat to the conservation of nature. TRAFFIC is a joint programme of IUCN and WWF.

Find out more about WWF’s work to protect Rhinos