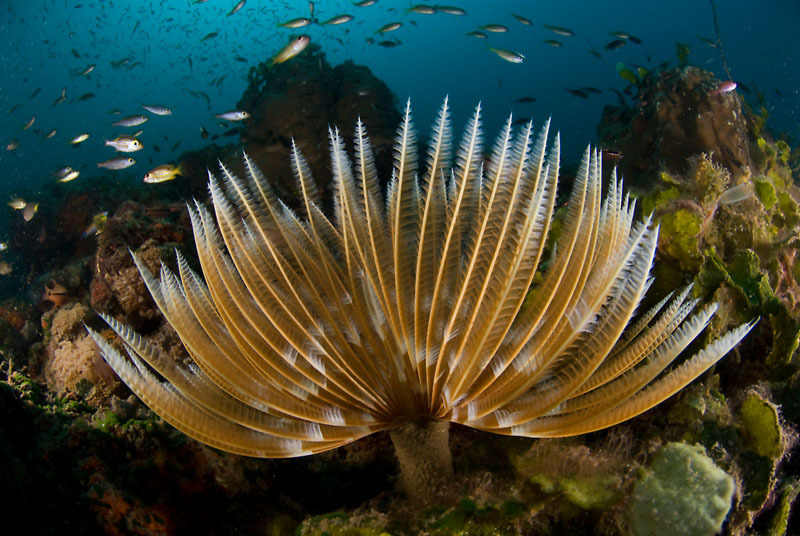 Mapping the future of the world’s richest marine hotspot

It’s half the size of the USA. More than 120 million people depend on it for food and livelihood. And the range of species found there – from tiny corals to gigantic blue whales – is mind-boggling.

You might not have heard of the Coral Triangle before – a 6 million sq km area of water off the coast of Asia and the Pacific. But there’s a good chance the tuna in your salad or sandwich came from there.

The Coral Triangle is the “nursery of the seas” – a giant spawning ground for some of the world’s most commercially valuable species, including tuna and much sought-after reef fish.

It’s home to three-quarters of the world’s reef-building corals, over a third of coral reef fish species and six of the seven species of marine turtle. Nowhere on Earth can match it – and we can’t do without it.

That’s why conserving the Coral Triangle is one of our top priorities.

The Coral Triangle is under severe threat.

Reef fish gather in large “spawning aggregations” to reproduce, but four-fifths of these are in decline or have stopped forming at all.

It’s the centre of the global tuna industry. Coral Triangle countries landed more than 1.2 million tonnes of tuna from the Pacific and Indian Oceans in 2009 alone. This is an unsustainable catch, and if it’s not curbed, the whole multi-billion dollar industry may collapse.

Protecting the Coral Triangle is absolutely vital if we want marine species – and the people who depend on them – to recover and thrive.

In 2009, we made a big step forward. We were part of a successful international campaign for a marine conservation strategy – the most comprehensive in the world – to protect the region.

In a groundbreaking show of conservation cooperation, heads of state from Indonesia, Malaysia, Papua New Guinea, the Philippines, Solomon Islands and Timor-Leste signed on to the Coral Triangle Initiative on Coral Reefs, Fisheries and Food Security . It’s a far-reaching commitment to conserve coral reefs, stop the decline of sea turtles and other endangered species, and transform fishing practices. Hundreds of millions of dollars of international aid are being channelled to support the initiative.

The 1997-98 El Niño weather event was a catastrophe for the Coral Triangle. In Southeast Asia, an estimated 18% of the region’s coral reefs were damaged or destroyed due to “coral bleaching”, which happens when oceans get too warm. But another effect of climate change – the acidification of the oceans – could be even more devastating, as this prevents coral formation.

Governments in the region have given their backing to conserve the Coral Triangle’s natural riches.

One major step will be Marine Stewardship Council (MSC) certification of a healthy, sustainably managed skipjack tuna fishery in the western Pacific, including Papua New Guinea and the Solomon Islands in the Coral Triangle region.

This would bring 15% of the world’s canned tuna under certification, helping guarantee the fishery’s future, and providing more tuna you can buy with confidence.