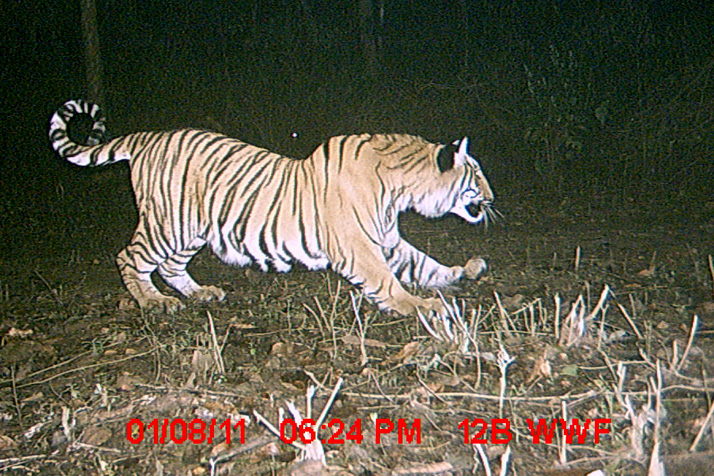 New Delhi, India – As it nears the end of its journey inside the northern Indian State of Uttarakhand, the Kosi River flows down the Himalayan foothills that separate the Corbett Tiger Reserve from the Ramnagar Forest Division to its east. The rustic forests that blanket this area are an important tiger habitat and form part of a crucial natural link – known as a corridor – that allows the endangered big cats and other important species to thrive.

A WWF team working in Kaladhungi, which forms part of the Terai Arc Landscape (TAL), has documented a Bengal tiger traversing the Kosi River, the first time the endangered species is known to have been captured on camera in the area.
Northern india tigers

Debmalya Roy Chowdhury, a Project Officer working in the area, shares an eyewitness account of this rare sighting:

“It was almost 11 in the mroning on 31 October, 2011. I was with two colleagues, Chandar Singh Neg and Tara Thaplial, [and we were] all very tired after a six kilometre walk on the bed of River Kosi under a scorching sun. We were about to reach one of the camera trap points along River, where WWF-India has been conducting the Kosi Corridor Monitoring Study for past two months. Just after crossing the river bed, Tara screamed out “Sir, tiger-tiger!” I looked up. How I felt at the moment is very hard to describe in words. There was a huge, mature male tiger walking along the river bed in that broad daylight attempting to move into the Corbett Tiger Reserve. The big cat was few hundred metres away from us.  After a few seconds of being perplexed, I started clicking off photographs. The tiger spotted us and tried to take cover, but realising there being none it turned back towards our camera point and disappeared into the jungle. This sighting made us get over our tiredness and we followed its tracks up to our camera point.  This was the most memorable on-foot sighting of a tiger I have ever had in my life – and it is probably the best direct evidence we have to document how well the River Kosi corridor is working.”

Adding substance to the above documentation are findings from a WWF-India study conducted in 2011. As part of the National Tiger Conservation Authority and Wildlife Institute of India’s all India tiger estimation exercise, WWF was involved in camera trapping and the subsequent estimation of tigers in the Ramnagar Forest Division, which includes the Kosi River corridor. The results were astonishing – both the positive findings as well as the challenges faced by the tigers.

“Our study lead by tiger biologist Meraj Anwar revealed that Ramanagar Forest Division has the highest density of tigers outside a Protected Area anywhere in India and perhaps the world. We obtained a high tiger density of over 15 tigers per 100 sq. km. In fact, this density is higher than that of many well known Tiger Reserves in India,” said Joseph Vattakaven, a Tiger Coordinator with WWF India. The detailed findings were published in Status of tigers, co-predators and prey in India, 2010.*

Adds Joseph, “We have initiated a detailed study on the pressures the River Kosi corridor is currently facing. Our intensive camera trapping study that is ongoing shows that tigers are dispersing via the River Kosi corridor but the unchecked mushrooming of resorts in the corridor is the single biggest cause for concern. Also, the fact that these tigers are in a non-protected area increases the urgency for measures to protect them. The protection they currently get is far less than the adjoining Corbett Tiger Reserve.”

The urgency of protecting this tiger population comes as WWF’s Tigers Alive Initiative launches a Zero Poaching action to stop tiger poaching in its tracks in tiger heartlands – the core areas where the big cat lives and breeds.  WWF and its partners increasing their engagement in the Kosi River Corridor will be a key aspect to building a future for the tiger there.  The Tigers Alive Initiative is calling on tiger country governments to secure the heartlands through renewed dedication and support for the well trained and managed field staff working every day on the tiger conservation frontlines.