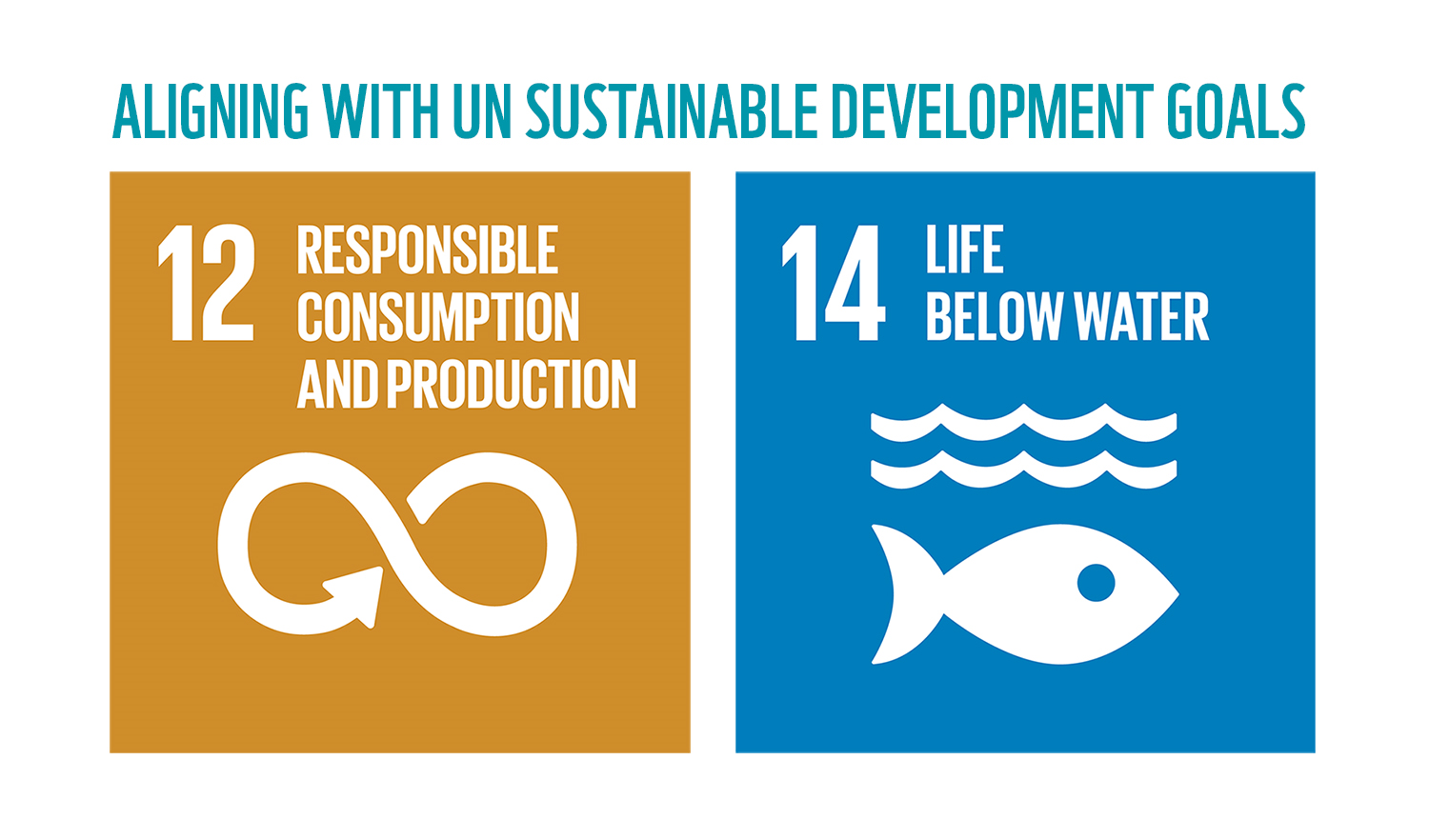 Singapore consumes 120,000 tonnes of seafood per year, where every 3 out of 4 popular species consumed here are unsustainable. The high demand in seafood consumption has led to overfishing – one of the biggest threats to oceans. 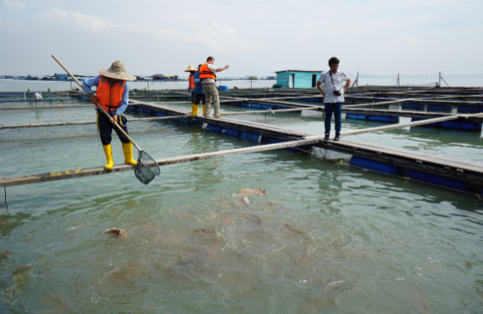 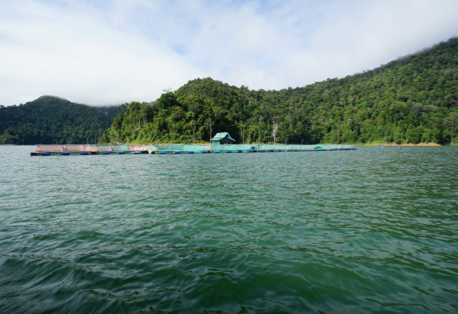 Malaysia
With the support of Marina Bay Sands, the number of aquaculture farms working with WWF has doubled in two years. Today, Aquaculture Improvement Project (AIP) farms in Penang, Perak, Selangor and Tawau are improving their farming practices as part of the partnership. The total production of responsible seafood from these farms reached 350 metric tonnes in 2019.

In 2019, WWF established the first Fisheries Improvement Project (FIP) to improve fishery practices at Marudu Bay in Tun Mustapha Marine Park. With a pragmatic and stepwise approach, WWF worked with the fishery to pilot solutions to enhance their sustainability practices. In the longer term, this will ensure food security for communities in Sabah and beyond by protecting future seafood supplies.

Viet Nam and Australia
To broaden the efforts of responsible fish farming and sustainable fishing practices across Asia, Marina Bay Sands and WWF supported the first ecological sustainability assessment of the marble goby (Oxyeleotris Marmorata) in Viet Nam. Results of the assessment will help inform future work to improve marble goby farming practices in Viet Nam while protecting the regional supply of a well-loved fish species in Singapore.

In Australia, Marina Bay Sands and WWF piloted an electronic observer project in a coral trout fishery in Queensland. As part of the project, Artificial Intelligence was used to monitor rates of threatened fish species, providing information that will help inform better fishery management in Australia. 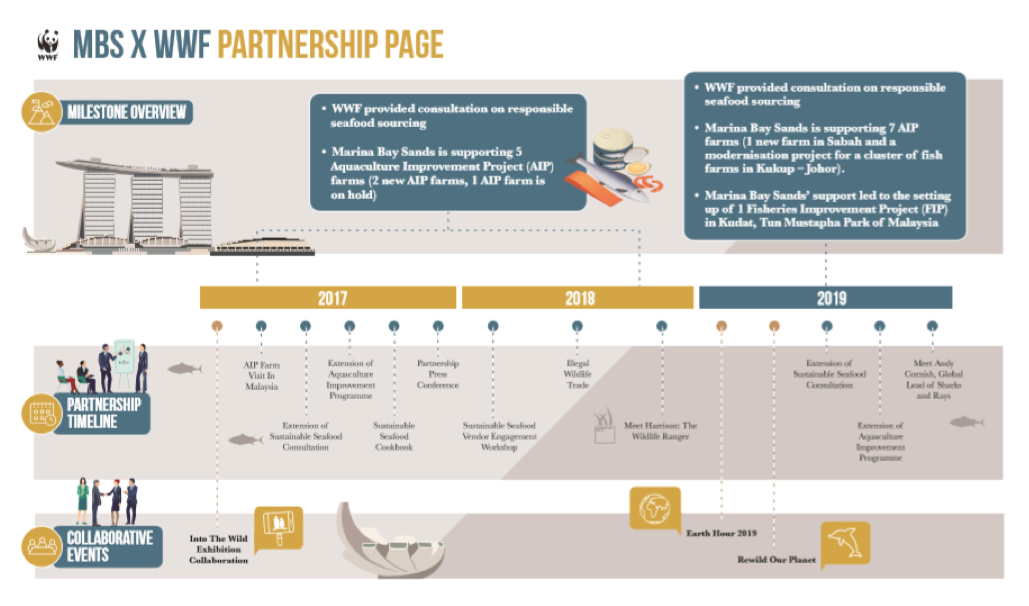 Marina Bay Sands has committed to source 50% of their seafood products from responsible sources by 2020. As part of the sustainability roadmap, Marina Bay Sands has completely removed the red-listed seafood from WWF’s Seafood Guide such as the popular red garoupa (a.k.a coral trout) and bluefin tuna from all menus, and is working to remove other red-listed species in the no-go list*

*Red-listed seafood has been identified as seafood that is assessed as Critically Endangered or Endangered by the International Union for Conservation of Nature (IUCN), or as red-listed in the WWF Seafood Guide

Events
Marina Bay Sands supports WWF’s outreach and engagement efforts in Singapore as an event and campaign partner. Unique conservation events and experiences that have taken place at Marina Bay Sands include Earth Hour 2019, as well as cutting-edge augmented reality experiences at ArtScience Museum,  Into The Wild and  Rewild Our Planet.

Every year, WWF and its global offices countdown to celebrate Earth Hour, the world’s biggest grassroots movement for the environment. In 2019, the first zero waste festival in Singapore was held at the Marina Bay Sands Event Plaza, in the Year of Zero Waste.

Earth Hour piloted measures and helped save 10,000 disposable plastic bottles and utensils, bringing 40,000 festival-goers together over three days to learn and act on protecting nature.

Marina Bay Sands has been an active supporter of the Earth Hour movement since 2011. Every year, the property dims and turns off non-essential lights in support of this movement. For the past six years since 2014, the integrated resort has organised a walk for Team Members during Earth Hour, rallying them to do their part for the environment. In 2019, Marina Bay Sands invited beneficiaries to join Team Members to complete the 4km walk. 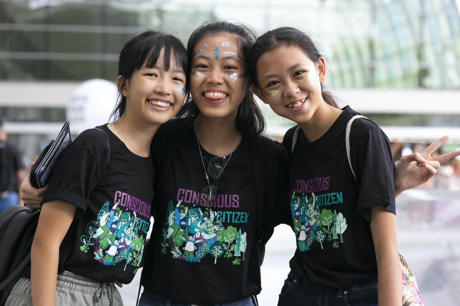 Rewild Our Planet at ArtScience Museum (2019)

In collaboration with WWF, Google, Netflix, PHORIA and ArtScience Museum, REWILD Our Planet was Singapores first social augmented reality experience based on content from Our Planet, an original documentary by Netflix. Powered by Googles ARCore technology, visitors interacted with digitally-created environments and gained a deeper understanding of how they can act to restore nature and protect wildlife. 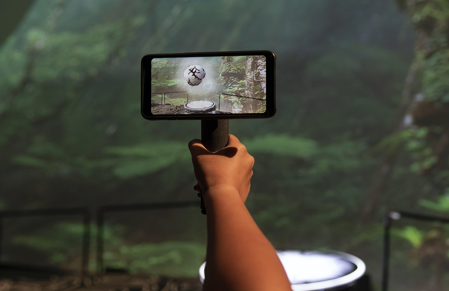 Into The Wild: An Immersive Virtual Adventure at ArtScience Museum (2017)

Into The Wild: An Immersive Virtual Adventure was an exhibition jointly developed by Google, Lenovo, WWF, Brian Gothong Tan (Singaporean Artist), Panasonic and Qualcomm. It transformed over 1,000 square metres of ArtScience Museum’s public spaces into a virtual rainforest. Visitors were able to take an active role in replanting the rainforests of Southeast Asia using their smartphone devices. For every virtual tree planted accompanied by a pledge to WWF, a real tree was planted in the rainforests of Indonesia. Through this project, 10,000 trees were planted in Rimbang Baling. 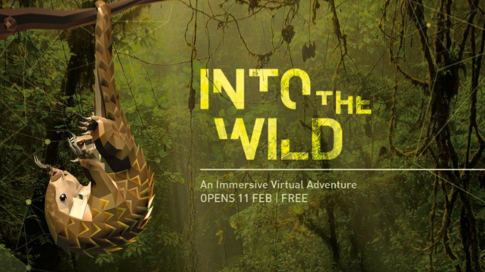