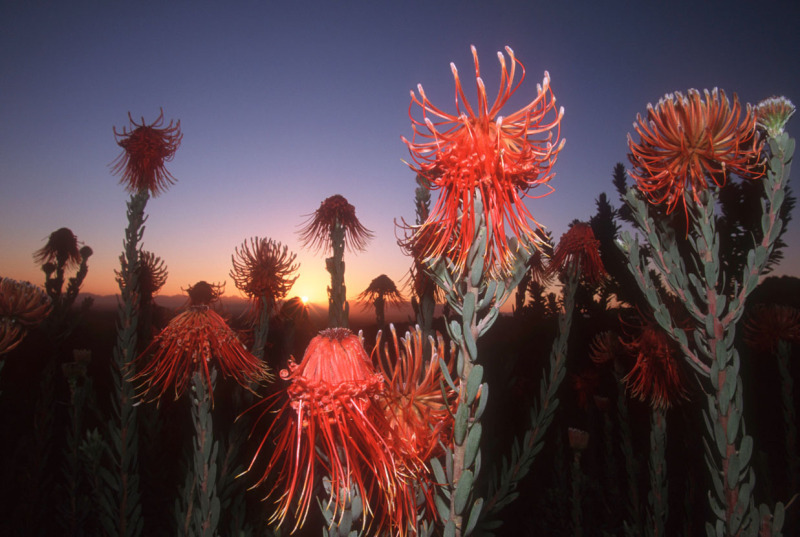 Imagine a landscape so bursting with plant life that scientists call it a “floral kingdom”. Picture almost 9,000 different varieties, from popular garden plants like geraniums and freesias to South Africa’s national flower, the magnificent king protea.

Now, imagine the massive loss if this incredible natural wonder was wiped out.

The unique fynbos – low-lying scrub, shrubs and bushes – that covers the mountains, valleys and coastal plains of the Cape is classified as one of the world’s six floral kingdoms. Other floral kingdoms span whole continents – which should give you some idea of just how special the Cape is.

Although it covers just 0.04% of the world’s land surface, the Cape is home to 3% of the planet’s total plant species. Hectare for hectare, its plant life is even more rich and varied than the Amazon. But its beauty can’t protect it from the problems that threaten its future.

Already, the region is in danger from overdevelopment as urban areas sprawl into the countryside, uncontrolled fires wipe out huge areas of vegetation and invading species crowd out the native plants.

At this moment, 1,736 plant species are at risk of extinction, while 26 have already been lost forever. We’re addressing these threats and making sure the area’s natural flower power stays strong.

In the ’90s, together with the World Bank we helped establish a conservation fund designed to protect the Cape. By 1998, the Table Mountain National Park was in full bloom. Almost 250 sq km of this unique landscape, including the Cape of Good Hope and Table Mountain itself, is now protected, just minutes away from the bustling centre of Cape Town.

We also brought together the government and local communities to form a special organization dedicated to conservation.

The success of Cape Action for People and the Environment (CAPE) proves that conservation brings benefits for the plants, animals and people who live on the land. The organization is helping to develop a “biodiversity economy”, promoting activities such as sustainable fynbos horticulture and ecotourism.

Already, some 300 landowners have agreed to preserve their land – and now we’ve helped bring 1,300 sq km under official protection.

The Cape is less than one-hundredth of the size of the British Isles, but is home to more than six times as many plant species. More info here.

We’ll continue to work with the communities and organisations of the Cape to find practical conservation solutions that benefit everyone. We’re determined that the astonishing diversity found there should continue to flourish.

Protecting the diversity of life

Five decades of innovation for conservation