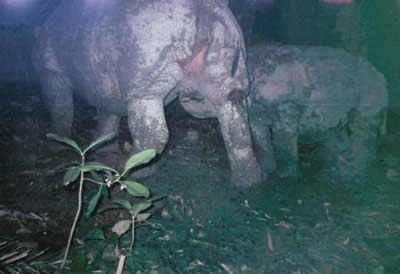 The footage, from a motion-activated video camera in Indonesia’s Ujung Kulon National Park, is a huge boost to efforts to save this almost extinct species that is threatened by poaching, disease, and the possibility of a tsunami or volcanic eruption.

“The videos are great news for Javan rhinos and prove that they are breeding in Ujung Kulon,” said Dr. Eric Dinerstein, chief scientist at WWF-US. He warned, however, that the survival of the species is still far from certain. “There are no Javan rhinos in captivity—if we lose the population in the wild, we’ve lost them all,” Dinerstein said, pointing out that an eruption by nearby volcano Anak Krakatau could easily wipe out all life on the peninsula where the rhinos are concentrated.

Possibly the rarest mammal on Earth

The Javan rhino is possibly the rarest mammal on the planet with as few as 40 left. Once numerous throughout Southeast Asia, its population is now likely isolated to Ujung Kulon National Park in Indonesia. This small population size makes it extremely vulnerable to any threat, including poaching for its horn, which is traditionally believed to have medicinal properties.

Conservation efforts have increased dwindling populations in the past

“Fifty years of conservation experience has taught us that saving Javan rhinos is possible through population management and proper protection,” said Dr. Barney Long, head of Asian species conservation at WWF-US. “We’ve done it before—helping rhino populations rebound in Africa and South Asia—and we can do it again in Indonesia.”

Dinerstein added, “The recovery of the white rhino in South Africa is the most successful example of international wildlife conservation for a highly endangered species. With less than 50 left in a single reserve in 1900, there are currently around 20,000 alive in nine countries. Examples like this give us hope that in 10 or 20 years through translocation and proper protection we can begin to witness a Javan rhino rebound.”

You can support the Javan rhino

WWF has established an emergency fund to support the establishment of a Javan Rhino Study and Conservation Area into which a handful of rhinos will be moved.

Visitors to www.javanrhinohope.org can learn more about the species and donate directly to a fund that will establish the conservation area and monitor the several individual rhinos that will populate it later this year. Establishing a new population is an essential buffer against a potential tsunami and an outbreak of disease and/or poaching.

The first video, recorded in November, shows a mother and male calf walking steadily towards the video trap, munching leaves. At one point the calf turns away from the camera and wags its tail to swat a fly. The second family made its video debut in December in a 30-second video that shows a larger female calf, approximately one year old, walking with her mother.

There is hope for the future of the species

“It’s such a joy to see these healthy calves calmly ambling through the dense tropical forest,” Long said. “It gives me hope for the future of the species and it’s moments like these that make all of the hard work of Indonesia’s dedicated field staff worthwhile.”

More on the Javan rhino

Donate to a fund that will help protect the Javan rhino