Rhinos listed among the most threatened species 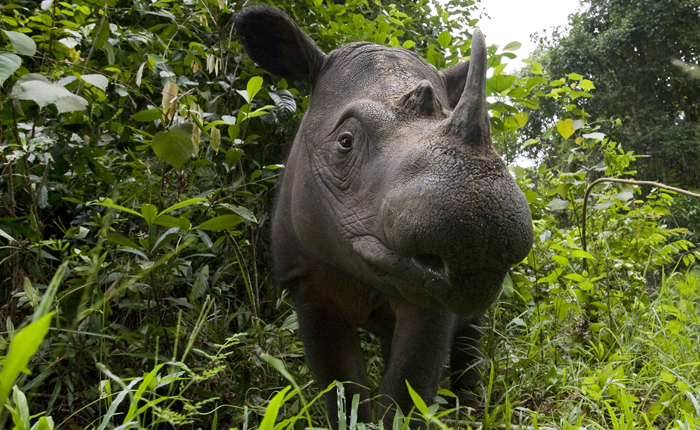 Rhinos listed among the most threatened species

Jeju, Republic of Korea – Asia’s few remaining Javan and Sumatran rhinos have been identified by conservationists as some of the most threatened animals in the world. A list of the 100 species at greatest risk of extinction has been released by the Zoological Society of London and IUCN to governments and environmental organizations gathering for the IUCN World Conservation Congress. Measures to conserve rhinos and other endangered species from threats such as poaching, illegal trade and habitat loss are expected to be agreed at the meeting.

“The world’s rhinos are under attack from poachers, traders and consumers who are after their horns. With so few Javan and Sumatran rhinos remaining, these prehistoric creatures stand to be lost forever unless steps are taken to increase their numbers, stop poaching, and curb the illegal trade in rhino horns,” said Dr. A. Christy Williams, WWF’s Asian rhino and elephant expert.

There are fewer than 50 Javan rhinos remaining, all in one Indonesian national park. Sumatran rhinos live in a few scattered locations across Sumatra and Borneo, but number fewer than 200. The animals are not breeding fast enough to ensure their survival in the event of a disease outbreak, volcanic eruption or tsunami. Additionally, Sumatran rhinos are under intense pressure from poaching and loss of their forest habitats to logging and agricultural conversion.

“The increase in demand for rhino horn in Asia in recent years, primarily from Viet Nam, has caused poaching to skyrocket to record levels as far away as South Africa,” said Dr. Carlos Drews, Director of WWF’s Global Species Programme. “Myths of new curative powers for rhino horn are fuelling an illegal market that threatens to compromise decades of successful conservation progress.”

Viet Nam lost its last rhino to poaching in 2010, leading to the country’s subspecies of Javan rhino being declared extinct. Another subspecies, the western black rhino in Cameroon, has also gone extinct. Three of the five species of rhinoceros are listed as critically endangered on the IUCN Red List.

However, effective conservation measures have brought back rhino species from the brink of extinction. Last year Nepal celebrated a year without any rhino poaching incidents, which was largely attributed to increased law enforcement measures implemented with the help of WWF.

“Highly-focused management can lead to increases in rhino populations as shown in the case of greater one-horned rhinos in Nepal and India. It is now urgent that conservation of Javan and Sumatran rhinos be addressed as a priority,” Dr. Williams said. “Given the gravity of the situation, extreme measures, such as translocations to safe sites and the establishment of new populations, must be explored.”

In honour of the International Year of the Rhino, Indonesian President Susilo Bambang Yudhoyono in June 2012 pledged to effectively address rhino conservation in the country and committed to better protection for the animals.

“As long as demand exists for rhino horn, and criminals consider the rewards outweigh the risk of being caught, gangs will go to any lengths to supply horn to the marketplace,” said Sabri Zain, TRAFFIC’s Director of Advocacy.

TRAFFIC is a joint programme of WWF and IUCN.

For further information or to schedule an interview with a WWF or TRAFFIC expert at the IUCN Conservation Congress contact: